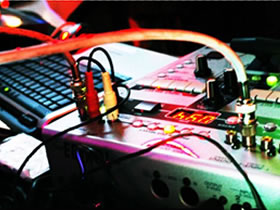 28th May 2008. On the eve of the fifth edition of LPM (Live Performers Meeting) , the beautiful pavilion of the former Mattatoio (Slaughterhouse) in the district Testaccio in Rome, is invaded by trolleys, cables, equipment, people quickly moving from side to side with tools and things to do, people that, arrived one day in advance, chat and laugh, meeting or meeting again, looking forward to the days of the meeting.

LPM is a meeting, a converging point for experiences and productions of hundreds of visual artists and VJs, who have in common their participation to the international community built around FLxER, an Open Source software for VJing, and live audio and video performances, produced by Flyer Communication. The effectiveness which LPM proposes the characterization as a meeting with, and not just as a mere performative event, is possibly the only black mark we could notice during our (beautiful and satisfactory) stay at the Mattatoio. The incredible number of participants, almost 250 artists from all over the world, and the consequent need to carefully organise the sequence of performances, were the partially disorienting element for both performers and public. The former, at times, were forced to present their performances in very short periods of time. The latter were a bit lost in the attempt to follow the various performances.

On the other hand, the essence and quality of LPM, and the technical and organizational preparation of the staff contributed pretty well to the creation of a positive and fascinating experience, which helped forgive these little imperfections.

But let’s analyse the course of the meeting: 900 square metres, three full-equipped central consoles, a score of big screens, an area for easily working with computers, an open-air exhibition space. LPM ‘s programme developed over 4 days, each one characterised by a central theme: Digital Freedoms, 8bit and Electropop, Breakbeat/Techno/Electro, Visual Genders. Each day was divided into three parts: in the early afternoon, workshops, conferences and debates; later on in the afternoon, and till evening, the most conceptual audiovisual performances; from late evening to early morning, the club setting, with VJ and DJ sets organised to give life to final dancing sessions.

The first day, dedicated to the theme of digital freedoms was characterised by a talk on Degradarte. Visiting guests: Guido Vetere, Luigi Pagliarini, Luisa Capelli, Gennaro Francione, Guido Scorza and Marco Scialdone, Carlo Formenti and Massimo Canevacci, debating on the philosophical and practical consequences of the “surreal” rule on the free use of copyrighted works for cultural, didactic and scientific purposes.

Then, in the nonstop flow of performances alternating on the two main stages, we noticed the aesthetic features of LaBa’s and Ale Marzo’s productions, and of Nangyor’s, characterised by a wise involvement of body in audiovisual performances and a smart use of setting. We want to point out the good performance of Defetto’s who, interpreting the geometrical tendencies in some renowned audiovisual products of the last few years (one for all, the Ganz Graf video, produced by Alex Rutterford for Autechre), offers a version characterised by an effective use of colour and interesting sound combinations. Following the tendency for the use of footage (shooting clips, both autonomously produced and recycled from other products or discarded video materials), the beautiful productions of NellaTestaGomma’s and Vjazz’s, MoriShuz’s use of dynamic perspectives, EnjoyVideo’s urban and post-industrial visions. Servando’s modified controllers were interesting and amusing. Friday afternoon, dedicated to 8bit, was reserved for workshops on different VJing softwares, from FLxER to Modul8.

In the afternoon, the deconstructed and generative abstract was the focus of EtichettaDiscografica’s performance. VisualLab’s analysis of intimate and poetically powerful urban fiction gave rise to an electric atmosphere when introducing Pintaycolorea’s contribution, accompanied by isocore’s music: expressionism spiced up with trash and videogame elements, a fully successful performance both aesthetically and from the point of view of iconographic choices.

Sunday, dedicated to the VisualGenders theme in collaboration with Phagoff, was characterised by different focuses of attention: sound reactive LED sculptures by Fabio Di Salvo, the excellent De-Former, Infidel’s beautiful and elaborate degraded/degrading inspirations, Polivisini’s intense Ero/Sono ( I was/I am ), the distorted cartoon-style narratives by SuperNormals/Action30 and Strap-on-Dildos’ social analysis of visual fetish and sexual practices.

All nights at the meeting were filled with the stream of more dance-floor-oriented performances and with a quite choreographic VJClash; the only black mark was the difficulty in identifying the author of the different audio and video components that powerfully pervaded the space. We noticed aesthetic, conceptual and, above all, visceral and sensory interest peaks in the beautiful aesthetics of JessicaIncertiTelani’s performance, in LanVideoSource’s interesting geometries, in DoctorGonzo’s set dynamics, in n-is’s use of layers, in VJ Tintin’s organo-hybrid sceneries, in paconazim’s distorted views of normality, in RedNikita’s fetishes, in the narratives emerging from Gabb Line’s collages.

Our point of view on the LPM was a really privileged one. We intensively lived the four days of the meeting thanks to the permanent installation space at DegrADaRTE EXPÒ, which became a real visual “attracter” for us and an interaction platform for the public. A totem with two 14-inch screens, made of recycled materials and installed on an iron structure, projected all the works in sequence. The lively totem, with a taste and aesthetics that you could find on a Pakistani truck, served as the entrance to the interactive installation Degradazione per sovrapposizione di corpi (Degradation through bodies’ superimposition ): the concepts of remix-culture are exposed and interpreted thanks to a broom which the public can use to remix 300 years of art history with a physical and almost domestic interaction modality.

This clear form of invitation to interaction and communication allowed the audience  often reduced to mere passive observer  to lose their usual inhibitions that, thanks to the possibility to use the body and to be creative through familiar objects, were in all cases disposed to open and direct communication. Besides, they were a curious audience well-disposed towards the chance to learn and know new concepts and new realities, open to information and to the dissemination of knowledge, and willing to have in-depth analysis and information sources at their disposal.

It is a sign of the growing attention to the field of new media and to the main themes connected with it (not least, the free dissemination of culture, knowledge, and open and equal approaches to urban, social and anthropological realities). On the other side, it is a symptom of the necessity, for the organizers of open-door events, to supervise the creation of settings in order to create actual public access to culture, art and information. In Rome , we recently had “dissonant” experiences, in this sense. LPM was, in this and other ways, a very pleasant surprise.