A Show On Friendship 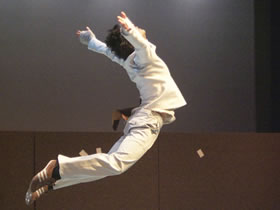 Nico and the Navigators are back to Italy as absolute protagonists of that Image Theatre able to win spaces of thought, with reflexions born from the same social drama analysis already examined by Victor Turner in the essay Performance in Postmodern Culture and able to show the public a creative approach half-way between improvisation, and absurd and maniacal rituals.

These are the crisis points that Nico is able to extrapolate and reintegrate, and change a condition where a readjustment of the whole dramatic scheme is needed, so as to point out peculiarities already known by Charles Hockett and Goffman, although with ever-curious irony and everyday life: artistically constructed pantomimes, word games, puns, alienating bizarre rituals proper of our manifestations, on ourselves or the other.

Their new show Obwohl ich Dich kenne (Although I know you  Smart friends and better halves) , that opened in Hamburg on the last 6 th of March, will be presented again on the 28 th and 29 th of June at the Inteatro Festival in Polverigi, on the 4 th and 5 th of July at the Festival de Marseille , and then will go back to the Radialsystem in its native Berlin where it will stage from the 8 th to the 11 th of October.

Nico and the Navigators was founded in 1998 by artistic director Nicola Hümpel and set designer Oliver Proske and immediately praised by the critics. Up until today, the productions Lucky Days, Fremder! (1999), Eggs on Earth (2000), Lilli in Putgarden (2001), Der Familienrat (2002), Kain, Wenn & Aber (2003) and HELden & KleinMUT (2004) have been on worldwide tours. In August 2006, Nico and the Navigators started collaborating with the Austrian music band Franui, creating together the grand production Wo du nich bist (Where you are not) . Franui’s composer Andreas Schett and Nicola Hümpel are already preparing Anaesthesia , a new musical show opening in 2009 on the occasion of the 250 th anniversary of the death of G.F. Händels, co-produced with Bregenzer Festspiele, the Grand Théâtre Louxembourg and the Händelfestpiele in Halle .

What happens when individuals fighting together for the same reason end up fighting each other? Does friendship feed on common actions? What if there are no common actions? Which rules do partners follow while playing with one another? And what is their aim? Friendliness without love hides hypocrisy? Are you more at ease with a smart enemy or a dumb friend? And who is going to be impressed on your mind? On impulse and with a glance on little catastrophes, in Although I know you , Nico and the Navigators get out the complex world of friendly plots and forced relationships, plunging in the deepest wounds of our times. In a dialogue marked by a violin and a keyboard, the characters lavish an unfair struggle in order to wake and keep alive the interest of the other.

You and me among the others. You are my ambiguous friend in my struggle against third parties. I need you on the right level for a proper task and I chose you since you already had the illness I have now la amo a te because the people you like lose the scepticism about me and lovely speak about me behind my back. Let them pardon me your absence for deathI will think of you as my smart enemy until your final days; because I have the feeling that we want the very same that we don’t know. Going alone is the replaceable  just as you mean it ” (excerpt from dramaturgic text).

As for the dramaturgy, the ensemble made use of diverse materials, even the letters exchanged between renowned couples of friends, such as Goethe and Schiller, Wagner and Nietzsche, Hermann Hesse and Thomas Mann. Quotations appear as monoliths intermingled with linguistic bewilderment and text improvisation and accompanied by controversial definitions and observations on friendship from different ages, up until our globalised XXI century. “To like and dislike the same things, that is indeed true friendship”, wrote Sallust in 50 BC. Aristotle thinks Friendship is an essential element for the creation of a working society and he places it above Justice: the State should show more regard for friendship. How are we to achieve friendship in a society always on the go? Is it the traditional interpretation of the concept itself  taking the shape of constant affection, trust and mutual appreciation – that in our moving, almost fluid, age has declined or is it more and more infrequent to find true friendship (Schopenauer)? Doesn’t Earth look so wide, as when you have a distant friendship (Gustaf Gruendgens)?

We are two ships, each with its aim and course, we can meet and celebrate together, as we have doneand then the brave ships rest silently in a harbour, under a sun willing to shine, as if they had reached their appointed task and have had a task. But then, the almighty violence once more divided our task, in different seas and sun beams and maybe we will never meet again. (Friederich Nietzsche, on his friendship with Richard Wagner  excerpt from dramaturgic text).

The performance has its own diachronic structure, where is highlighted that psychological essence in which all units (actors) have their own entity and cognitive mapping that can allow a better knowledge of the self and the consumer. Here, society is fragmented in reflections, with their genres, uncertainties, inconsistencies and naturalness. Thus, we play with one another, we fill places, we play roles until wearing and taking off standardized masks. “Thus, the strength of social drama comes from it being an experience or sequence of experiences that affect the form and function of performative cultural genres in a meaningful way.” (V. Turner, Anthropology of Performance ).