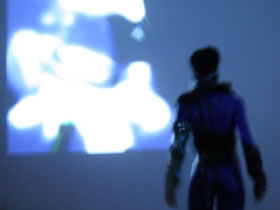 We are not alone. The philosophical observation of the technological contemporary era (and, also, of our everyday lives) allows us to describe the emergence of new forms of life. A technological mutation took place in the human being.

Technology always modified us. We have always been cyborgs, and this is not a new concept. Transport technologies mutated our perception of space and time. The developments on energy, starting from electricity, changed our conception of time flows and of the usage of time for production. Telecommunications opened up new possibilities for our own thought, allowing it to be freely addressed throughout space, and to propagate independently from the material body.

Information technologies and, specifically, network technologies go along these directions with even more emphasis. Network and information technologies, with a mutagen leap, directly connect the mind of the human being to hyper-contents and to hyper-contexts, creating perspectives that are totally new. The possibilities are astounding in more than one direction. In this article we will stop and analyze one of them, by researching on its phenomenology: identity.

The contemporary research on identity, in its conceptual and perceptive evolution, is a structurally multi-disciplinar practice, running from philosophy, to anthropology, to sociology (does it still exist?), communication, law, economy. And, naturally, technology. In the technological ecosystem individuals define themselves, become multiples (the multi-vidual), disappear (anonimity). They are multi-gendered, multi-personality. Even more: they melt into a fluid one-ness with the systems, letting new existences emerge: others, different, synthetic.

Technology enables hyper-medial contexts in which the dualistic perception between physical and digital disappears, just as the possibilities to separate organic from technological. Just as it is unthinkable, in the contemporary era, to look at even a simple tomato and not consider it as a technological object.

In this deep remixability of existences, contents, connections and processes, new forms of existence emerge. The scenario is systemic. Even more: it is eco-systemic. Globality gave us the first clues. Multinationals probably are the first example of a sentient technological form of life. We have them before our eyes each day of our lives: they possess objects, rights, decisionality, strategies, they have fears and beliefs, iconologies and mythologies. We perceive them as true sentient entities, em-bodied in their logo ( iconology ) and in the neo-mythology that characterizes their life cycles.

Having to deal with “forms of life” whose name ends with “Ltd”, “SpA” o “gmbh” becomes a standard part of our daily lives, and doesn’t produce any perturbation to our perception of normality. Not any more. We will describe an artistic process animated by this point of view: a study on the new forms of life that appear in the technological contemporary era. And, as a consequence, on their identities. Contemporary reality has been observed by systematically pursuing different strategies, planned to focus on the human being, on artificial life forms, and on the forms of life emerging from collectivity. This is the research process at the base of ” Talker “, ” Talker Performance “, ” Dead on SecondLife “, and ” Angel_f “.

The first step has been to choose a tool that would allow us to operate on all of the forms of existence that were the object of the research: language has been identified as the ideal tool to work on all of the required levels.

The second step has been to create an object that could use language to study the expressive mechanisms of the life forms: the ” Talker “. “Talker” is a structural object. It was built by assembling algorithms coming from artificial intelligence and statistical analysis to create a software engine that could recognize, systematize and generate language. In a very simple and intuitive way, texts can be inserted into the Talker by cut&paste on a web interface. The texts are processed by the algorithms, that interpret them syntactically and geometrically. Syntactical analysis allows to recognize, inside language, the structurally ” interesting ” components. Geometrical analysis allows for the spacial interpretation of these components. Language becomes a crystal whose multidimensional shape changes with language’s variance.

Other algorithms are applied to the crystal to recognize recurring patterns inside its structure: the symbols. Paths in space and through symbols are created in this multidimensional domain in order to generate new language. The result is a synthetic, generative language, expression of the collective mind that contributed to its creation, often poetic and highly evocative. Aesthetics are purposely cold and linear, showing the non-humanness of the expressed form of life.

Talker is an abstract and structural manifestation of the object of the research. The next steps of the process materialize it, through three modalities:

•  the construct (Dead on SecondLife);

Talkers Performances (presented at the PEAM, the Pescara Electronic Artists Meeting, in 2006) embodies the ” Talker “, re-interpreting it as a cyborg. In the performance the human body gets invaded/expanded/connected. Focus is on interaction. The body of the performer becomes the media for the expression of the ” Talker ” by wearing a latex suit covered with electrodes and sensors, connected to a web interface that the audience can control. The dancer’s mouth is shut, replaced by the generated voice; her movements are replaced by the electrical stimulations. Every sensorial component of the performer has been replaced with a generative one. Latex and electrodes replace touch; hearing was replaced by the generative soundscape; taste and smell are cutoff; sight, replaced by the immersive generative videos around the stage. Communication was bi-directional.

The audience interacted using the interface to collectively build the life of the cyborg-dancer, whose movements, sounds and vital functions (as recorded by the sensors) were given back as an environmental feedback that the users perceived under the form of an immersive sound and visual experience. The “digital being” is embodied at several levels in the environment, in the interface, in the body-corpse, in the users’ minds. The mind ecosystem wakes alive, materializing the Talker-Cyborg with a spatial synesthesia. The ” Talker” is the embodiment of the collective being and it is present in space: the direction goes from the virtual to the body.