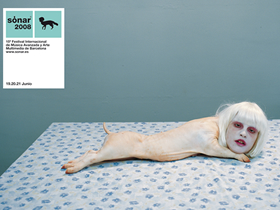 Digicult has confirmed its media partnership with Sonar, the most important international event for electronic music. From June 19th to 21st we’ll be reporting from the event in Barcelona, which has recently opened its doors to new media and (even if with some reluctance) to audio/video performances.

Presenting the Sonar to those who are thinking about dedicating their energies to the most crowded and important event for electronic music to this day is not easy, if anything because of the huge amount of musicians, djs, video artists, labels, installations and partners featured every year. According to advance information from the organization, the programme of the 15th edition is based on two main themes: the “feminine factor” in today’s music and “hybridism” as a result of the interaction between genres and subgenres.

As far as the presence of women in the programme is concerned, some absolute pop divas like Goldfrapp or Róisín Murphy contrast with M.I.A.’s multicultural glamour and Camille’s vocal alchemy. Some other guests, hard to file under any genre, like Justice, Yelle, Diplo, Spank Rock and Boys Noize provide this year’s programme with an injection of hybrid energy and stress the considerable attention for the DIY spirit.

The festival will be an occasion for meetings and “meet-agains”. Two short-lived but legendary duets are reuniting at the Sonar: pop legends Yazoo and Mike Banks together with Jeff Mills, the real genesis of the Underground Resistance phenomenon. At the same time, Jamie Cullum and his brother Ben will draw efforts with the Underworld’s founder Darren Emerson, in BC vs JC featuring Darren Emerson. Kanye West’s collaborators A-Trak and Kid Sister will mix records and beats with new sensation DJ Mehdi.

The “feminine factor”, where can it be found?

Modern divas like Alison Goldfrapp and Róisín Murphy; fighters with different origins like M.I.A. and Tara de Long; female feminist rappers like Kid Sister and Northern State versus colourful pop icons like The Duloks and Yelle; significant voices of the past and the present, such as Alison Moyet (Yazoo) and Camille. And naturally the queens of the dance floor Miss Kittin and Chloé. And what about the men? The feminine factor also belongs to Antipop Consortium, Spank Rock, Flying Lotus and Daedelus.

The traditional divisions applied to electronic music are no longer useful to explain the new trends in today’s market. We are dealing with a complex mix of styles which no longer respects the roots or follow clear rules, whose features are so undefined and genetic code so re-mixed that it actually is impossible to say who the mothers and fathers of these sounds are.

The Sonar 2008 programme is filled with illegitimate sons and daughters. Can anyone say for sure which is the main source of inspiration for Justice, Yelle, Boys Noize, Diplo or labels such as Ed Banger and DIRTY? This is the real difficulty, old definitions don’t apply anymore, this is something new. A real headache for the non-purists.

SonarMática 2008 turns to the charming origins of cinema. In 1895 the Lumiére brothers performed their first public screening, which would have influenced our vision as spectators during over the XX century. Anyway, even before this event, magic lanterns, Cinerama, zoetrope, flip books and chronophotograhy were some of the most surprising techniques which contributed to the creation of images in motion. This universe of artefacts provided a new way of looking at things, through 360° projections and 3D images. Strange enough, multimedia art in the 21st century is following the same path.

SonarMática explores the potential of these technologies with some among the most significative contemporary artists, like Marnix De Nijs, Julian Oliver and Andy Cameron. Installations which transform reality, instruments with panoramic visualizations and audio/video shows, brought together to discover new ways for the creation of images. This exhibition allows spectators to discover the world of visual representation through the eyes of a child, the eyes of someone who’s looking at the “dream factory” for the first time.

SonarMática 2008 is the second exhibition in a trilogy spacing from XIX century revisited to the days of the digital era. The project started last year with Et Voilà!, focused on the relationship between magic and technology, with the aim of looking at the future of contemporary art from the perspective of the most interesting production of the past