Rudy Rucker: Let’s Give Flurb To The People! 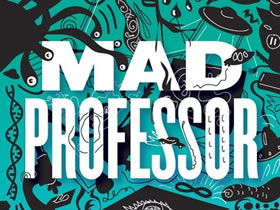 For this month’s Digimag issue we interviewed Rudy Rucker, science fiction writer, mathematician, programmer, visionary. Among the main artists of cyberpunk first wave, Rucker has developed an extremely peculiar career as a psychedelic literary researcher able to mix ( in a literary project he has called Transrealism, in which he has fantastically reintepreted his real experiences ) “high” and “low” cultural elements together, creating an amazing twirl which has its roots in the great fantasy-mathematic classics such as Flatland and Alice’s Adventures in Wonderland . Well, with such premises, all one can do is to plunge into reading and see what dimensions one is projected into. In this interview we asked Rucker to tell us about his most recent projects, such as his webzine SF Flurb (gathering some of the most interesting science fiction authors of the last twenty years together, from Laidlaw to Shirley), or the release Creative Commons of his latest book Postsingular.

What we found was the same attitude we find in his novels: the concept of a free information spread which challenges the idea that free spread necessarily means economic loss for the author. Moreover, according to his Do It Yourself philosophy, the author believes that ” when the works you create are too weird for normal people, well, do not complain and distribute them by yourself. As far as his biography and bibliography are concerned, our suggestion is to read his books and both his site and Flurb’s, hoping our Italian editors start get going and translate those Mad Professor’s works which have not been published in Italy yet.

Bertram Niessen: Your latest novel Postsingular was both published as a printed book by the publishing house Tor and as an e-book that can be freely downloaded from the web by Creative Commons. Why did you choose that solution?

Rudy Rucker: It’s all the fault of my young SF writer friends Cory Doctorow and Charles Stross.  They’ve been doing this kind of double release of their novels, and they get really good sales.  The idea is that the free e-book version generates enough buzz and sales to make up for whatever sales you lose with the people who might have bought the book, but who read it free online instead.  The overlap between people who buy hardbacks and people who read free e-books is perhaps not very large.  The hope is that those who read your free e-book will talk about it and blog about it, generating interest of those who actually buy books. I’m not sure yet if this has helped my sales or not.  It may be that Doctorow and Stross sell better than me because they’re more in tune with public tastes.  Possibly their success has nothing to do with the free e-books.

It’s too early to judge how the gambit affected my hardback sales for Postsingular .  In any case, about 30,000 copies of the free Postsingular e-book have been downloaded (though one never knows if they read the whole thing — one hope is they start the book, get sick of reading off a computer screen and buy a hardback) I got some nice emails from people who read the whole thing, a number of them were engineers who read the book (on the sly) on their office machine at work.  A couple of ultrageeks even read the book on their cell phone or Blackberry.

By the way, my publishers have tried selling some of my books as e-books, but the sales are on the order of dozens, not even hundreds.  At this point, people just won’t buy e-books.  Possibly this changes in five years if Kindle-like readers drop from $400 to $50.

Bertram Niessen: Let’s talk about Flurb. Why did you start that project? Weren’t traditional SF media enough for you?

Rudy Rucker: What happened was that Paul DiFilippo and I co-authored an excellent story called “Elves of the Subdimension,” and we were in a rush to get it published in a magazine or webzine before it appeared in my anthology Mad Professor .  And I sent it to some webzine, I think it was Strange Horizons , and the guy turned us down, rather coldly I thought, and I was, like, who needs this?  I can do graphics, I know other writers, my son runs an ISP, why not start my own webzine?

There’s an iron-clad rule in publishing: the less they pay you, the worse they treat you.  When you descend to the lowest levels, you’re often judged by fan trolls who treat you like a noob fan writer, or who even take pleasure in cold-cocking a pro.  If I write something that I know I can’t sell to a top market like Asimov’s or Tor.com or a special anthology, then I’m better off publishing it myself. I got the name for Flurb from a line of Paul DiFilippo’s in that story of ours that started all this.  Some subdimensional elves are discussing how odd things are up in the human world, and one of them incredulously exclaims, “Of flurbbing, they know not!”

I love that line.  I guess I might define “flurb” as a verb meaning “to carry out a complex, non-commercial artistic activity,” and as a noun it means “a gnarly artwork that’s incomprehensible to the average person.” Later I searched on the Web and found in the Urban Dictionary that “flurb” has also been claimed to mean “a person obsessed with fannish role-playing games,” “home made crack cocaine,” or “to alter or to tweak.”  And I think programmers use the word to mean a change or fix to a program.

Bertram Niessen: In Flurb we can read a good selection of the best post-cyberpunk authors of the latest years. Is it the evidence that the scene is still developing?

Rudy Rucker: A scene?  Well, I do tend to get the same friends to write for Flurb over and over­Marc Laidlaw, John Shirley, Charlie Jane Anders, and Richard Kadrey in particular.  Shirley, Anders, and Kadrey live in San Francisco, so I physically see them now and then, but almost never all at once, so it’s not like a hanging-out-together scene.  But I guess it is a little bit of a virtual scene.  Laidlaw even got some of us to write a group story­by Gustav Flurbert­but that didn’t really work out that well.  I don’t think anyone but Marc and I bothered to read the whole thing.

At least in my case, having Flurb as an outlet has freed me up to write some stories that are so quirky and non-commercial that I wouldn’t have written them otherwise­I think in particular of “The Third Bomb” and “Tangiers Routines.”

Bertram Niessen: It seems your interest in mathematics leads the reader towards a constant lack of certainty. Do you consider that a paradox ?

Rudy Rucker: If all you know about math is adding and subtracting, you imagine that math is very safe and tame.  But the stuff that mathematicians are actively working with is far out and confusing.  They’re investigating consistent worlds that are unreal and wildly unfamiliar.  Kind of like science fiction.

Bertram Niessen: Do you know other contemporary authors who play with maths as you ?

Rudy Rucker: Nobody else does exactly what I do, but there’s a guy called Alex Kasman who maintains a very complete and up-to-date : http://math.cofc.edu/kasman/MATHFICT/