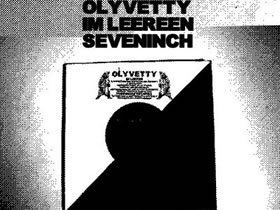 Olyvetty is an audio visual environment project that started in Berlin in 2006 when the musician Claudio Rocchetti and the visual artist Riccardo Benassi met .

Olyvetty is the distortion of a symbol, the language prevailing over the content, the information over the production. With this new project, which was presented at Netmage 08 for the first time, the depths of noise and minimal-techno have been systematically plumbed . We interviewed Riccardo Benassi when the duo’s two records were contemporarily released: As all-encompassing as a hole , a double picture-disc vinyl which was recorded manually and Hundebiss Records of 7″ Im Leeren . The two artists both live in Berlin , where they met and started their collaboration. What they have in common is their actual research on sound, which means a direct interaction with the object and its surface through the use of different supports, both durino production and live processing.

Riccardo Benassi was born in Cremona but he had long lived in Bologna. He has been working with sound experimentation for years and a young artist of great promise in Italian contemporary art. In his work objects become the real protagonists and the audience is encouraged to interact, thus turning everyday noises into symphonies. His multidisciplinary research is not restricted to sound experimentation and spans over different expressions, such as videos and illustrations. One of the artist’s works is currently showed at TIME CODE, an exhibition at MAMBO in Bologna. With that work the artist has explored one of the dimensions that are more specifically linked to video language: time.

Claudio Rocchetti was born in Bolzano, but has been living in Berlin for some years. He processes sounds by mixing turntablism’s manipulatory techniques with concrete music’s. He breaks down and deconstructs sounds and uses radios, recorders and microphones to create an analogic process of sound generation. He has dealt with different subjects: he used to be member of a hardcore band, the OvO, he founded the 3/4 Had Been Eliminated and, beside the collaboration with Riccardo Benassi as Olyvetty, he is collaborating with the Jooklo Duo supported by Hypnoflash .

Silvia Bianchi: How did the cooperation with Rocchetti and Olyvetty project started?

Riccardo Benassi: We met in Berlin , where both live, and we felt a cooperation was possibile when our point of view started overlapping. On the one hand we developed an analogic production methodology, on the other we studied mistakes from a social point of view. Olyvetty is purposely the distortion of a name related to an industrial system which designed life-styles and dreams, although the passing of time has made that reality nearly a foggy fairy tale.

Silvia Bianchi: How did you coordinate audio and video? Did you process them together or did each of you work with them separately?

Riccardo Benassi: Since Olyvetty project started I have chiefly dealt with the visual component and worked more with the sound during live performance. For Nights Erase Days Erase Nights I shot the factory using an environment microphone in order for the sounds not to be too precise. From that point on each of us worked separately and then put the work together during live performance. Thus audio and video are literally “coordinated” only in the two realities, the one I shot and the one I perform.

Silvia Bianchi: What kind of processing did you use to create the video? Is the central idea of recurrence conveyed by technique too?

Riccardo Benassi: What I wanted was to spoil the unreal perfection of digital images. To do that I used technologies that alter video frequencies as well as primitive physical methods, such as dropping a mixer. The three- screen product has nonetheless a strong narration line that can be compared to a tv show belonging to childhood years. In the Italian tv show ‘Scommettiamo Che?’ there was a game where an object had been previously melted in the oven and the contestants had to guess what it was. The melting process was showed backwards, so that the melted object regained its shape in the end. Similarly, the editing let you see the factory product’s actual shape just in the end. On the contrary, during my personal development the pattern of eccessive repetition does not create a real narration; rather it divides time into parts which are similar but not identical.

Silvia Bianchi: Considering the crisis the music market is currently experiencing, do you think releasing a double picture-disc vinyl which was recorded manually is somehow a way to give importance back to the support? How are you distributing the record?

Riccardo Benassi: Unfortunately I don’t think the support will last long if we consider the music market and I don’t believe retro fetishism can change the present situation; rather we can assume new solution can be found for the future…We were interested in vinyl support from many points of view, because of its status of multifunctional object which magically contains reality. The grooves let us use the record as a tool to “play” tridimensional images as we like, thus making further changes to the support possible for us only. Since As all-encompassing as a hole , was released in just 333 copies, its distribution has not posed a problem. We entrusted the distribution to people we appreciate, who owns super-fluo stroboscopic shops mainly in Berlin (the list is regularly updated in our blog). Actually, I adore vinyl because of its unbeatable sound which slowly changes each time you listen to the record It also reminds me when it’s time to turn it once the song is finished… an audio track is a time unity after all.

Silvia Bianchi: Can you tell us something about your collaboration with Hundebiss Records and the release with this new label?

Riccardo Benassi: Hundebiss’ components and us worked in the same habitat; their project started as online distribution aiming at spreading rare works they discovered among self-productions and international music experimentations. My suggestion is to check new works in their wild myspace page every week ( http://www.myspace.com/hundebiss ). When we learnt they were planning to develop their project by producing songs we were just planning to release our new 7-inch .

So Im Leeren was published, with an incendiary release party inside a cardboard mountain which had been designed for CareOf in Milan. The logo I designed for Olivetty was magically reinterpreted by Hundebiss who created a fantastic pop-up fantasmatico which opens on the record’s sleeve and symbolizes a research for depth as well as che si apre sulla copertina del disco, e segnala, con il senno di poi, una ricerca di profondità e uno scostamento dalla superficie lineare e narrativa del tram-tram.