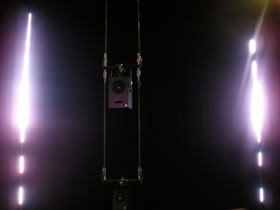 Elektra is back. The Canadian audiovisual art festival comes back for its ninth edition in the habitual Usine C of Montreal. A series of international artists will perform from 7 th to 11 th May ’08 with audio-video live that will be judged in June Digimag edition.

Between the rich setting of Elektra for this year, I found very attractive Kaiichiro Shibuya audio-video live, on one side because of its artistic and productive history  musician, sound designer and owner of ATAK label, on the other side because of its collaboration with Exonemo, couple of Japanese audiovisual experimenters able to use digital tools and circuit bendings of different kind. I appreciated Shibuya work for ages, both as musician and ATAK producer as well (label that is leveled to the more well-known Raster Noton and 12k in terms of production, aesthetic, packaging and image), and recently had the opportunity to get in touch with his sound design art, thanks to the installation Filmachine presented by Club Transmediale 2008 inside Tesla halls. A fascinating and striking audiovisual installation, made by an open cubic structure, surrounded by constructions of speakers and columns of Led, from whom center the spectator is guided in an immersive flow of drones and lights. It uses chaos theories, cells automations and logistic maps to re-create a systematic non-rhythmic sound-light flux.

Emotional maximalism and aesthetic minimalism, art and grace in an equilibrate design with a synaesthesia system that pushes the limits of chaos. A rare tension, that his live in Elektra will surely give to the public and that he openly talks about in this interview.

Marco Mancuso: Would you tell me something about your performance in Elektra 2008? You’ll perform with Exonemo, so would you like to tell us how this collaboration was born and which is the concept and structure of your audiovisual set?

Keiichiro Shibuya: Exonemo and I started a collaboration a year ago, during an event for my label called “ATAK Night 3” , where Pan Sonic and Goem performed as well and it has been recorded and edited as DVD. That partnership was awesome, so we decided to collaborate again for this occasion. Sound and visual are completely autonomous, so we’re never synchronized. There’s no specific concept in our live, even if we’re always conscious of the high resolution and “hyperness” obtained by the high density and speed of our data, that human beings are not able to perceive.

Marco Mancuso: You launched Atak label in Japan, that follows lots of aesthetic instances, production values and thematic interests of labels such as Raster Noton or K12. Each one of your releases has a splendid package and design elements are always elegant. The structure of your label is founded not only on musicians, but also on designers, visual artists and sound artists.

Keiichiro Shibuya: I never thought my label as in terms of aesthetic or communication strategy. ATAK is formed by individualities, well known as specialists in their areas, so they work on their influences or suggestions, while I just direct them. For now, since I started ATAK in 2002, I’ve always been conscious on what I should have done after the reign of the minimalism movement. At the moment I’m working on the concept/idea of “maximalism”, inside my entire work. The name of the label ATAK derive from an error in the word “attak”, so it’s synonym that the label want to evolve including an error on one side, attacking sound and the potentialities of tones and rhythm.

Marco Mancuso: I had the opportunity to live the installation Filmachine at the CTM ’08 in Berlin, inside Tesla halls. You worked with Takashi Ikegami in that occasion. This project started from an album, where you present a series of abstract sound tracks, created by algorithmic software such as Logistic Map and sndchanger. You said that those tracks are “dynamic non-linear models, sounds that emulate chaotic system characteristics, schemes that are in equilibrium between stability and chaos”. Why did you decided to work on those concepts and how much chaos concept is important in your work?

keiichiro Shibuya: Takeshi Ikegami is a well-known researcher of chaos and complex systems. After a month since we met for the first time, we started a project called “The Third Term Music”. Filmachine is the first work produced by our collaboration. Nothing is completely casual, but it is not a loop as well. It is a real system that uses chaos theories, cells automations and logistic maps to create the non-rhythm in a systematic manner. I can surely say that we’re more interested into technical component, before the concept or the aesthetical realization of the project.

Marco Mancuso: How do you put sounds and lights inside space in your installation version? Who worked on the stunning installation design? And in general, how much is important in your work the approach, not only as musician, but also as sound artist, attentive to physical space and immersive synaesthesia impact of the public?

Keiichiro Shibuya: The flicker of the Led inside “Filmachine” are controlled by different parameters that are managed for example by the decibel of the sound, by the cells automation, by the logistic maps. These parameters are interpreted as sound used for the composition or as data that allows the sound moving around the space three-dimensionally. In every moment we can choose what parameter to send to Led, using the fact that the system allows multi-level composition of sounds and optical movements in a perfect way.

Marco Mancuso: You work with the Yamaguchi Center for Art and Media as well, together with Sota Ichikawa, that I interviewed in February, n. 32 of Digimag, about Mapping Sound Installation project. Would you tell us something about your role in the project, and in general about your professional and artistic relationship with the center?

Keiichiro Shibuya: If I should describe YCAM center, I’d say it’s fantastic and nothing more. There’s a technical staff with sophisticated skills and the center produces lots of sound installation works. I worked in this very direction with dnA, on the sound design of the installation Mapping Sound Installation. We can establish an intimate relationship with the technical staff, while we create a new work in the center, and this is very important. At the moment we’re discussing about a new work for next year.

Marco Mancuso: Which are your audiovisual and music production plans for the future?

Keiichiro Shibuya: At the moment I’m working on two album at the same time. One in piano with some electric sound and the other one will be totally electronic. I hope I can realize them both this year. Moreover, there will be some concerts in Europe and Filmachine will travel around some museum. There are some artists that will produce for my label, but please I need to keep them secret. We have some astonishing names in the list!.