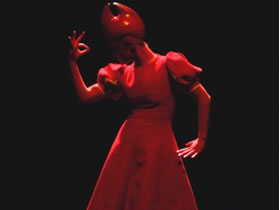 They are becoming more and more famous, they are appreciated or slated, they don’t have anything to lose; they live and sleep for theater, among innovative sets, special texts, theaters with an invisible audience, improvised shows, contests, and rents that must be paid.

They go on because they believe in what they do; sometimes they have to fight against the Italian bureaucracies; they join forces, despite the geographical distance and their meticulous job. Maybe, in this period there are too many research theatrical companies; but quantity is not so bad, it could promote innovation, competition and self-awareness. Then, quality and professionalism will be promoted too. What has really changed is the notion of space, time and body. Audience, artists, organizations, stage, set, visual art and direction: these elements have incredibly developed.

Eva Geatti and Nicola Toffolini of Cosmesi project, on April 12 th started a performance at PIM Spazio Scenico in Milan, as a part of the project Progetto Quattrospine by Serena Vincenzi . If you see La primadonna_chi semina vento raccoglie tempesta , you’ll appreciate a work of talent and wonder, intensity and irony; it is a climax and by watching Eve you can feel her femininity and her symbiosis with the stage. The audience will find a vertical installation, without any escape, everything is still, and sound emphasizes each gesture and gives great importance to the woman: image and definition of her own body. Suddenly Nicola’s “monster” becomes real and comes as air, sudden and destructive. Finally, the birth of a new life, with the throw of an egg, symbolizing life and the end of everything. Nowadays, the company is working on its new performance, Lo sfarzo nella tempesta , that will be performed thanks to the machines of Michele Bazzana and thanks to the work of Stefano Pilia . The themes are: luxury, waste and vanity related to disaster; the poetic and visual set is re-constructed to welcome the audience in an innovative way. It is going to be performed on May 9 th and 10 th in Fidenza during the Giostra di Maggio festival; the 13 th ,14 th and 15 th of June at the theater Villa Mazzacurati, in via Toscana, during the event Aspera-drammaturgie possibili ; and the 19 th they’re performing in Bologna for Punto Critico.

Alessandro Carboni and Danilo Casti, members of OOFFOURON/N.P.A. Officina Ouroboros, after the projects Anagenesi and Etimo in 2005 and ABQ in 2007, on May 15th and 16th are performing for the first time WBNR – What Burns Never Returns, at Fabbrica Europa 2008 Platform #4. It is going to be performed again during the Contemporanea and Santarcangelo festivals . WBNR is the second phase of the research project ABQ: from quad to zero . The project is a wide research about body and city, about an organism, a double mutant system in which cohabit deformed territories, structural glitches, uncontrolled codes. They create new dynamic maps of places in continuous transformation. Through the creation of a work platform, several researchers will work on the application of a method of analysis and composition of choreography focused on a specific urban context of the city where the performance will take place. Proceeding analytically from space in its different typologies, from territory to body, its flows, dynamics, agents and movements are quantified and codified. This double stage-city feedback is re-created live and screened on the video of the stage. The aim is to elaborate a single system of choreographic composition capable of interpolating all the collected data to be returned in the form of choreographic instructions. WBNR is an immeasurable choreography between body and territory, an exploration of city and body, re-imagining new ways of analysis and paths of investigations in order to reflect on the anthropological and social-cultural transformations of the individual, and how technology, infrastructures, palaces and people are organized in the contemporary urban space.

Sara Bonaventura , Iacopo Braca , Matteo Ceccarelli , Claudio Cirri , and Daniele Villa , members of the company Teatro Sotterraneo , on May 20 th and 21 st at Fabbrica Europa 2008 are performing La cosa 1 (the thing 1) after their great success with Post-it . “Space just as it is, with no accessories. An empty place. A stage mechanism that expands and retracts, pervading the places. An invasion. A presentation of hyperactivity. The body that gives all, continually doing something, on stage doing in order to do, do2, do3, overdo, overhandle. For you. The lights are switched on. The crowd amalgamate. Movement starts, any movement, anything so that someone does something, even if it is only waiting to do something  a continual bracing of muscles and nerves, a search for an extreme condition. La Cosa 1 is the event, but it is also the moment immediately afterwards, when you stop, exhausted, saturated; La Cosa 1 , however, goes on, repeats, insists, starts moving again, dashes, does. A study on effort and the power that peters out, on the condition of a body that starts out cool and fresh and goes on even when there is nothing left. Doing a certain thing and then presenting a copy of myself incapable of going on. The end replaced by the sequel. Always, in any way, something more than nothing”. (T.S.)

Muta Imago is a theatrical company founded in Rome in 2004 by the playwright Riccardo Fazi , the director Claudia Sorace and the scene designer Massimo Troncanetti . Their first performance is not so complete as their latest work Don Giovanni , in which they worked on the interaction of the four actors and the large set including three wooden cubes of different dimensions and a pool, a game of water and earth. In 2007, they created Comeacqua : this story wants to be open, it refuses the classic theater time, and its main characters are cords, plastic bags, an iron table, and water. These objects are re-interpreted, beaten and filled, closed; it’s not a performance about water, but on water. Comeacqua was performed again and often reviewed.

The next work was (a+b) ³ performed for the first time at Enzimi festival. And finally the last work is Lev , the re-starting point. It is set at the end of the war, a man opens his eyes and looks around, he doesn’t recognize anything, he gets up and goes to the wall to hear sounds; it’s a metamorphosis, he falls and starts remembering. A person is obliged to stay in an empty space (3×6 meters), three lamps, a hundred kilos of flour, trying to fill it to come back home. Lev analyzes the relation between verbalization and remembering, between imagination and its verbalization. “1943, European Russia. Lev is a soldier, a bullet pierced his skull changing his life forever. He lost consciousness, and he doesn’t remember anything. He can’t do even the simplest action: what is only left is imagination. This is a metaphor, Lev has to learn to speak, just like they have to; Lev starts everything again, his story is also the story of his company”. They’re performing on May 10 th at Teatro Comunale in Cesenatico, on May 23 rd at Biennale dei Giovani Artisti in Bari, and on May 30 th in Tuscanica for Furore-Danze no stop . In July they’re performing at Inteatro festival in Polverigi, and at Sartancangelo dei Teatri festival .

Zachés Teatro, based in Scandicci (Tuscany), is made up of Francesco Givone, Luana Gramegna, Costanza Givone, Samuele Mariotti and Stefano Ciardi . This young group is able to use different expressive forms such as masks and puppets that create a unique relation with the audience, following the principles of biomechanics, motion, word absence and visual focus. “According to our analysis, our performances have important implicit meanings. Word breaks a balance and we are obliged to say too much, or too little, we are unable to express all feelings through words. When used, Word is perceived as something pure, essential, synthetic, iconic, belonging to the universe of its meanings, such as an object, a gesture or a mask, not a word. However, we want to tell something, because we do theater.

Every written text has an implicit meaning that is not visible where the audience looks, and that is what we want to tell. Our goal is to reconcile, in our performance, aesthetic, visual and play elements, that are related to each other through gestures, puppets, masks, objects, lights and motion” (Zachés  La poetica ). On May 8 th they’re performing Faustus!Faustus! in Cerbaia (Florence) at JackandJoe Theatre, and on May 17 th La favolosa vita di H.C. Andersen at Gioia del colle (Bari) for the children month .

On May 23 rd during the INTERPLAY/08 International Festival of Contemporary Dance in Moncalieri (Turin), the young Teodora Castellucci (daughter of the great Romeo Castellucci) is performing À Elle Vide, which was awarded the special prize of the GD’A ’07 jury. And Daniele Albanese is performing Tiqqun  Nemmeno l’Allodola Vede l’Aperto presented last December at the Teatro Comunale of Ferrara and at the Natura dei Teatri festival.

On this occasion there will also be Sonia Brunelli, from Forlì, on May 25 th with her NN : ” NN is the fall in an original place, in a pre-linguistic condition, considered as a special and primitive status of gestures without any strict meaning. The actor is near the limits and controls the gestures. In this still situation, movement becomes a rhythm, that brings from the origin to something else. The audience imagines the future position of an objects, just like in a video game the player imagines the possible future movements of a ball. NN is a movement that divides into two and becomes real in its own negation. It’s a movement that deletes and stops the development of a human individuality” (Sonia Brunelli).

Finally, Nico Vascellari is performing for the first time, on May 9 th in Rome for Dissonanze 08, his Live Set along with Stephen O’Malley from Sunn O))) and John Wiese from Bastard Noise , vacillating between violent ancestral calling and hyper-contemporary alienation. It’s an unforgettable experience. The epoch of theater is beginning, we should follow our feelings and our intuition; we are acquiring more and more traditions, new sounds and visions in new places and different cultural realities.