The Hidden Road To The City Of The Future 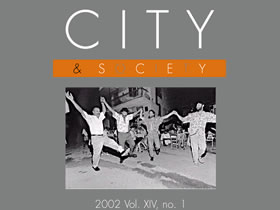 The first February the German magazine for the “young research” Sciencegarden opened a request for bids called “City in present, past and future” (Die Stadt in Gegenwart, Vergangenheit und Zukunft).

The editorial staff proposes to select and reward reportage, reports or interviews that have city as subject and that come from the most different disciplines (engineering, sociology, botanic). The conductor theme is justified by the fact that cities, from Greek polis to modern metropolis, are an unlimited source of ways of reading social, political and technological relationships between human cultures. They’re, for example, maps of the augmented need of mobility, energy, pollution, occupation of territory and country erosion. The dynamic of evolution is to beat. The mutations of cities don’t reflect only programmed combinations of town planners and builders, but also political parties, expressions of parallel societies, tensions and cultural dialectics, random manifestations of the demographic emergency. There are a lot of knots to undo and they often have an everyday recurrence. Sustainability and achievability, creation of new political and cultural spaces, defusing conflictual zones, etc

Judging the publications of specialized reviews, it seems like 21 st century cities are going through a crisis that seems more an occasion of reflection and a turning point than a catastrophe. “City&Society” (n.2 of 2007) is completely dedicated to young cultures such as “architectonic elements” of the urban spaces, their practices of resistance and participation to actual late-capitalism economy, but most of all, with a strong comparing cut to “disempowerment” phenomena of them (that includes USA with New York, Africa with Dakar and China with Beijing), that is “defusing” their creative power or excluding the discrimination economy. Last City number is even more interesting, analysis of urban trends, culture, theory, policy, action (n.3  2007), dedicated to the forms of advanced marginality, who are common to Paris (banlieu) and Baghdad .

There’s an overlap between those studies and those of the “scenary”, coming from the knowledge sociology, where disillusion in cognitive synthesis abilities of the Net in relation to centripetal strengths of metropolization (a metaphor for globalization) took place of a renew attention for the forms of a physical proximity started from the digital media, to get to the recognition of a urban “digital physicality” of the nets. It is a complex discourse and could bring us far away. On one side, the urban studies underline how human being who live in cities nowadays aim to become not only citizen of their physical space, but also members of enlarged communities, with boundaries delimited by their cultural practices that overcome ethnographical or class connotations. On the other side, sociological knowledge studies, with “digital city” concept, underline the correspondence between the cognitive digital dimension of the knowledge centers and the urban physical space (see the review “Technological Forecasting & Social Change”, January 2007, “Building human-centered systems in the network society” by José L. Moutinho, of the Center for Innovation of the Lisbon University ).

Those interrelated centers of “conscience production” do not live in a digital dimension, but are able to move people and cognitive energies, able to turn public administration and market more efficient, but must be sustained by infrastructure and suitable institutional frames. A new paradigm of city, able to answer to a larger complexity and heterogeneity of the actual societies in the urban environment must be achieved. The city must support the creation and diffusion of the knowledge, it must help the mobilization of people and of the information as well and it must promote the inclusive development of the new cultural elements.

We’re in front of a recurrent case of co-evolution of human and social contests on one side and of endogenous processes of the technological mutation on the other one, in a sort of “multiple futures” already present in the actual cities by the forms wrapped one into the others, as in Berenice of Calvino.