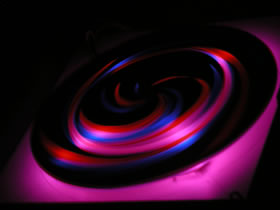 Sonic Acts took place in Amsterdam on the last weekend of February. Its focus was the “Cinematic Experience”, and I believe it to be one of the best festivals that I have attended of late. It managed to strike a stimulating balance between conferences, projections, performance and exhibitions.

The main topic represented not so much a conceptual hat to the festival (a rather myopic and tired formula, as many recent festivals have shown) but rather it acted as a guideline along which it was possible to embark on a journey paved with references that swung between contemporary digital culture and its analogical/mechanical/electronic historical reference. Those who have experiences of festival, meetings, conferences and exhibitions based around the digital art world in Italy and Europe know that my sentence is not banal. Once again in 2008, Sonic Acts, just like in the previous editions in 2006, 2004 and 2002 which had different topics, became an important moment of reflection, whilst still remaining very connected to a strong experiential approach to new media and to a historical-artistic reflection on them. It managed to do this without hysterical ‘big event’ derives and most importantly without falling into institutional directions that would have distorted its approach and dynamism. That is all.

Sonic Acts XII  The Cinematic Experience, an important appointment for all those who work and study in the arena of audiovisual art, has represented an unique moment of encounter with some of the ‘sacred gurus’ of the noble art, and a moment of reflection on the immersive, synesthetic, experimental, neuronal and aesthetic practices in the sound-image relationship. The organizers of Sonic Art have been able to insert audiovisual art into the larger domain of contemporary art, through performances, projections and especially through lectures. T

They have managed to do this thanks to continuous references to the experiences of the first experimental cinema, of the rekombinant practices of materials and instruments, of the synesthetic dialogue between music and visual arts, of the relationship between perception and science. All this was done rationally, without intellectualisms, thanks ‘simply’ to an extreme competence and a will to explore the essence of the chosen topic. Maybe a deeper thought on aesthetic practices would have been necessary (personally I cannot disregard this aspect) and on the evolution that the first experiences of the last century have undergone. The feeling is that it was a choice to concentrate on one side on practices and methods and the other side on perceptive and scientific effects.

Notwithstanding this very personal thought, the extremely high standard meetings were certainly the central nucleus around with Sonic Acts was structured. In the small De Balie theatre (centre of the festival and welcoming meeting point for artists, speakers and the general public) international experts in the fields of visual arts, music, science, literature and art took turns in describing the audiovisual art of the past, present and future.

Personally I had the most intense experiences at Erkki Huhtamo‘s lecture, which was centered around the history of the diorama and on their historical and cultural significance in relation to the development of contemporary media culture, and at the lecture of the director and reference figure of the first experiments with the audiovisual medium, Ken Jacobs (interviewed in this month’s DigiMag), who then performed his Nervous Magic Lantern at Paradise on Saturday night.

The meetings with Kurt Hentschlager and Tez, with Jeffrey Shaw and Marnix de Nijs, with Ulf Langheinrich and lastly with Timothy Druckery focused more on the dialogue between science and art, on the neuronal relationship between sounds and images, and on the concepts of special immersion and perception of the audiovisual stimulus. Kurt Hentschlager and Tez focused their lecture on flickering and on the receptive impulse of the retina and of the human brain under the constant stimulus of light and video: this is maybe a slightly reductive approach for Kurt’s Feed project (which we have spoken about in DigiMag before) but nonetheless useful for Maurizio Martinucci’s PV868 project. The artist performed live Saturday night at Paradise .

Jeffrey Shaw’s and Dutch artist Marnix de Nijs’s meeting focused mainly on interactivity. The incredible intervention of the Australian artist and researcher stupefied everyone as he showed the pieces on interactivity of immersive audiovisual systems that he has been following for years at the iCinema Research Institute in Sydney . They are technologies fit for the cinema of the future, that require a high standard artistic content but that nonetheless illustrate a scene of the possible theatres and cinemas of the future. Ulf Landheinrich illustrated how his pieces (amongst them live Drift that he performed Saturday night at Paradise ) focus mainly on the granular synthesis of sound and of images, in order to provoke a cortical perception of the audiovisual information. American professor Timothy Druckery focused on a series of historical videos that document the relation between the first computing machines and the early studies on artificial intelligence.

The third day of the festival was dedicated to the video-screening program: artists like Mika Taanila and Rose Lowder presented some of their pieces. Of extreme interest were the panels Absolute Sound and Future Cinema where two alternative ways of working with the cinematic experience were proposed. The first one was centered on sound and on the absence of images (the soundscape Weekend by Walter Ruttmann from 1928 was beautiful). The second focused on some artist that cannot be defined as directors per se (again, very beautiful was the work Study #40 by the Austrian artist Lia, 2007). Over the three days the video program gave us some spectacular moments. Top ranks the collection Absolute Time (amongst others The Flicker by Tony Conrad, 1966, Instructions for a light and sound machine by Tscherkassky, 2006, Noisefields by Vasulka, 1974 and Around Perception by Pierre Herbert, 1968, were very moving), and Absolute Frame I and II (visual forms, rhythms, colors, audiovisual perceptions).

The exhibition organized in the Montevideo rooms was equally interesting: the artists involved were Ulf Langheinrich, Kurt Hentschlager, Julien Marie and Boris Debackere. The pieces on exhibition were very varied, with the intent to cover the different technical and aesthetic approaches of the audiovisual cinematic experience. Personally I found the work by French artist Julien Marie wonderful. He has been working for years in the audiovisual terrain with a mixed analogical and digital approach, and he reflects critically on the use of digital technology when it impedes the re-discovery and the materiality of the artistic creation through sounds and images. “Low resolution Cinema”, as the name suggests, is a low-tech projection that abstractly reproduces the geopolitical space of Berlin . The image is obtained through a special projector that uses two Liquid Cristal Displays (LCD) in rotation. And there is more: the famous installation “Exploding Cinema” transforms the exhibition space in a real experimental film studio, fantastic in its mechanicity, where the absurdity or war is reproduced through the progressive deconstruction of sounds and images.

Kurt Hentschlager’s video installation “Scape” follows an invisible red thread made out of sensibility and delicacy. It is about perception of time, phenomenological conscience, reflexivity, and it follows the abstract evolution process of a black and white tree branch that resembles more a Zen drawing rather than a natural object.

Boris Cebackere’s pieces, “Probe”, have a very different technical approach and audiovisual impact. “Probe” is an immersive interactive installation that plays with the spectator’s movement and invites her to perceptively immerse herself in a magnetic flux of sounds and images, in relation to her distance to the projection screen and to Ulf Langheinrich. The artist is present at the exhibition with two pieces: “OSC” and “Soil”. The first piece engages with many topics that are covered by the festival and it goes further towards an type of work that Granular Synthesis have been experimenting with for years, thanks to a process of audience immersion in front of an installation that in essence plays with the flickering of the video image. The second installation plays more with video abstraction, by presenting four screens arranged horizontally that show a series of extremely elegant graphics in movement obtained through a process of deconstruction of filmic images, as primary elements of a research in the structure of time and on field creation, a concept that is very dear to the Austrian artist.

In conclusion the live performances took place in the splendid location of Paradiso. Cluster, Leafcutter John and Pomassl&Nikita Tsymbal were the most interesting pieces of the first evening, while the three mentors of Raster-Noton and their Signal project was disappointing. Without wanting to be blasphemous, their performance appeared too static and repetitive, based on audiovisual notions that have been too well known and understood for many years now. The formal rigor and the minimalism typical of Cartsen Nicolai, Frank Bretschneider and Olaf Bender’s work was present, but in the blending of all three artistic personalities it became rather weak, beautiful but cold, and at times almost banal. What a shame.

As mentioned before, on the Saturday evening a tribute was paid to the artist Ken Jacobs and to his “Nervous Magic Lantern”: a ‘riverberated silence’ of rare magic and fascination, an analogic break moment in the middle of the obsessive digital flux that obviously characterized Sonic Acts. Bruce McClure’s performance “Illuminated Dislocations” was on the same wavelength. It brought on the stage long forgotten analog audiovisual technology (like Harold Egerton’s xenox flash from the 30s or other esoteric filmic technology) and it accompanied the obsessive repetition on the screen of a flicker image with a hallucinatory and almost mantra-like carpet of noise. There is more: Otolab’s performance “Circo Ipnotico”, presented by Digicult, surprised the audience with its formal and rigorous audio and video output, obtained through a fascinating and unique use of digital software, analogical machines, electronic signals, human dexterity and live improvisation. Ryoichi Kurokawa, Ulf Langheinrich, D-Fuse e Tez’s new project’s performances were always elegant and effective. Their pieces are more explicitly digital examples of what the contemporary cinematic live experience can be: immersive, sinesthetic or narrative.

A unique ending closed the twelfth edition of Sonic Acts, which took place on the Sunday at Paradise : the live presentation of the immersive sonic efficacy of Acousimonium, historically one of the first examples of spatialisation of sound obtained through the construction of a 80 speakers system of different dimensions, positioned at different heights and distances between them. The day was organized in collaboration with the research centre GRM -Group de Recherches Musicales of Paris  and was initially characterized by a series of performances by director Christian Zanesi, of compositions for Acousimonium by Parmigiani, Pierre Schaeffer, Pierre Henry, Michel Chiom, and by live performances respectively by Christian Zanesi again, by composer Kasper Teopliz, by legend Hans-Joachim Roedelius and in conclusion by Christian Fennesz.

We experienced a magical afternoon and evening, where we understood sound’s physical mechanisms and the human response to sound stimuli with genuine emotion. A worthy closure for, and I repeat myself, one of the most interesting and best curated festivals that I have experienced in a long time. Congratulations to Sonic Acts!.