The Observatory: The Observed Science 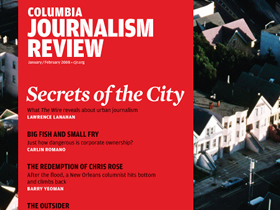 As you can understand, the aim is to satisfy the needs of a type of journalism that treat science in a credible way, informative and independent. It is pretty original the position and availability to confrontation of the review with new media, such as digital magazines and blogs about scientific news (they talk about Gristmill blog magazine, Scienceblogs.com community, Knight Science Journalism Tracker and obviously the New York Times Dot Earth blog). CJR thinks that the Internet and mobile technologies nets has been contaminated by industrial lobbies through information in favor of valorization of verify and evidence methods that should contradistinguish science. The aim of the CJR observatory should be concretely translated in unmasking, through high quality news, false alarmism, inexact scientific balances, wrong representations of the experiments, revealing the value of questions implied into studies and the priorities discussed by the public opinion.

The Observatory is one of the last products of a transformation process suffered by the scientific communication that the science sociologist Massimiliano Bucchi has properly defined as “scientific metamorphosis”. In his “Journalism, Science and Society: Science Communication Between News and Public Relations”, wrote together with Martin Bauer, Bucchi evidences how the science communication radically evolved during last years. This change is due to technological and organization development of the journalism world, but also to a huge development of the activities of public relations made by the research institutions. The contact between research and media world augmented, both for a bigger interest toward science themes by the public and for a bigger sensitivity of politicians and financiers.

Bucchi and Bauer report about APPALTO cases of school pages to local press university offices, denouncing the absence of criticalness by a type of journalism that is no more filter or interpret of information (the famous Watchdog Role of the Media by Jacques Ellul), but only a boutique of news.

This linearity is re-assembled and often masses are aware of specific criticism of some researches before they are discussed and clarified, by specialists. Entire researches adapted their communication to the journalistic world of the news making. Better (enthusiastic) announcement of little discovers related to promises of a final goal, rather than opened and complex discussions and prudent tones, maybe due to some failures.

Anyway Bucchi and Bauer remain on the side that denounces the criticalness of the system and do not trespass the border of the PROPOSITIVO area. Robert Frodeman and Carl Mitcham gave several indications in the article “New Directions in Interdisciplinarity: Broad, Deep, and Critical” appeared on the Bulletin of Science, Technology & Society (December 2007). The authors think the communicative scene of science follows the trends of the other scientific languages. The complexity of the nowadays-cognitive production presents the tendency to invade different levels of the institutionalized systems. As those themes are important for the entire humanity (wars, poverty, demographic over-growth SOVRACRESCITA, environment contamination, etc.), they require a new type of interdisciplinary knowledge that has the promotion of general visions as objective, but at the same time they have to be able to integrate different disciplinary (and regional) knowledge.

This is an innovative concept of inter-discipline. There’s no more opposition to “discipline”, but rather a complement to it. It occludes (the overproduction) and synthesizes. “Interdisciplinary History, Theory and Practice” (1990) by Julie T. Klein is a fundamental work in this direction, but “Human Sciences: Reappraising the Humanities through History and Philosophy” (2000) by Jens Høyrup follows that way, talking about new developments. New forms of inter-discipline offer the occasion to pass the political limits of the disciplines knowledge to reach a stronger goal of pertinence of the social needs. The objective is to solve sustentation problems of all that projects that intercept (or stimulate) the needs of the hegemonic community, the prosecution of those projects ideologically arrested by inviolable limits, the re-opening of the dialogue about researches excessively occupied by religious and ethic positions became dogmatic.

As for the “Encyclopedia of Science, Technology, and Ethics” of 2005 (designed by Carl Mitcham), the knowledge must be co-built through discussions of ethic-scientific values applied to the world of techno-science. Those values must not be chosen or created, but be “pertinent”, that means be applied to social and environmental, freedom and human responsibility justice questions, in a sort of operative synthesis. The matrix of the communication, it must be said, has both vertical and horizontal axis. The first one has the different scientific disciplines, the second one the academies, the public and private sectors and the stakeholder communities.