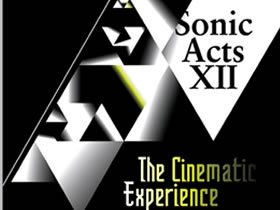 At last, after the usual two-year wait, Sonic Acts has come back. In my opinion, it is one of the best run festival inside of the international panorama of digital art.

The 12th edition of Sonic Acts , that will be held in Amsterdam from 21 st to 24 th February, will investigate the fields of the Cinematic Experience, with the usual rigour and the always useful comparison between the historical experiences of an audiovisual research narration and the more contemporary researches in the field of synaesthetic relations between audio and video. The rendezvous with Sonic Acts is literally not to be missed as it represents of those few historical moments for meditation and analysis of the path of Audiovisual Art, one of those rare moments when one can try to find a connection between the experiences of the past century and the avant-gardes of the digital era.

Through a perfect mix of conferences, screenings and performances that centre on the main theme of the event, Sonic Acts XII  The Cinematic Experience means to understand the possible links and the sure references among the audiovisual experiences typical of a certain expanded cinema of the second half of the 19 th century (from the zeotropes to the organ colours, from the magic lanterns to the optical instruments) with the digital synchronies obtained through a software to sample sounds and images in real time, nowadays used for performances and synaesthetic installations. The attempt to observe the relationship between the artist and his piece of art and the space and audience who attend the audiovisual experience is equally fascinating, compared to the similar tendency to spatialization that distinguishes all the artists invited to Sonic Acts. Without forgetting maybe the main aim of this analysis, historiographic and methodological at the same time: trying to find a possible definition for the modern experimental cinema, where a series of digital technologies allow working and intervening on images and sounds in a new way.

If on the one hand the right homage is paid to some seminal experiences of the sound-image-space relationship, like the design of the Philips Pavilion by Le Corbusier, Xenakis and Varese or the Movie Dromes by the Dutch artist Stan Vanderbeek as well as the astonishing Vortex Concerts by Jordan Belson and Henry Jacobs , on the other hand there is a tendency to investigate the lessons left by the great experimental filmmakers like Walter Ruttman and Oskar Fischinger (and I would add at least Norman Mclaren) . In a word, the rudiments of every expert of this subject with the addition of those logical and methodological connections (no references are made to any aesthetic movement that could act as point of contact for similar experiences considered from a technical and experimental point of view) that other cinema events lack in, both the Audio Video festivals that looks only for the spectacular elements and the cinema seasons that are no longer experimental because of their obsession for possible common points with those forms of visual art dear to the rich (and dull) contemporary art scenery.

The various and interesting meetings are certainly the hinge of the festival. The media archaeologist Erkki Huhtamo will introduce his researches into “dioramas”, movable highly tecnhologized theatres of the 20 th century, and also their relationship with other media of the same period such as “magic lanterns”. While the researchers Jeffrey Shaw and Marnix de Nijs will talk about interactive cinema and immersion backgrounds. Moreover, a very interesting panel will take place with the participation of the Italian artist Tez and the Austrian Kurt hentschlager and it will centre on the Dream Machine concept, as the audiovisual experience is often able to act as “a machine able to create dreams”. As for Marzio Martinucci and Feed for the ex-Granular Synthesis, they will start from their personal involvement in the PV868 project (presented inside of the performance section) to explain how strobe lights, sensory di-perception and audiovisual immersion are still elements that cannot be renounced in order to live a true “dream experience”.

Stephen O’Malley and Carl Michael Von Hausswolff will talk about drone music and its effect on audience’s perception and sense of time, while the experimental filmmaker Ken Jakobs will attend Sonic Acts XII to show his work methods for his well-known project/utopia “The Nervous System” , where during the ’60s he was able to stimulate the viewer’s nervous system through flickering and three-dimensional effects, only through the obsessive editing of the print. Then he will present his new work “The Nervous Magic Lantern” . Furthermore, the researcher Frank Kooi and the artist Ulf Langheinrich (at the festival with the live performance Feed, in Italy in 2006 at the Mixed Media Festival in Milan) will talk about “perception and illusion”, in a world they will explain how audiovisual art is able to specifically intervene on the cortical perception of the images, and also on the brain information processing of the viewer while he is attending a representation where sounds and images interrelate.

The last conferences presented will be mainly centred upon issues connected to the possible developments of contemporary experimental cinema. While Mika Taanila and Rose Lowder will describe how traditional cinema instruments can be used to transform the concepts of fruition time and space, Arjen Mulder and Gerard Holthuis will analyze the Real Cinema concept and how to create inter-relations between cinema and real world and vice versa. The conference titled “The conditions of live cinema” by Douglas Khan will close the section. It will discuss examine the development of live performance and audiovisual improvisation through sounds recorded by musicians as well as media artists and experimental filmmakers.

The Sonic Acts XII exhibition section (at the Netherlands Media Arts Institute and Melkweg Mediaroom ) will show some installations by Boris Debackere, Kurt Hentschlager and Julian Marie (obviously these work are centred on sense immersion in virtual audiovisual backgrounds) and the multi-channel sound installation of the Swiss collective Leerraum .

The film programme will present some cinema strongholds like The Art of Vision by the master of experimental cinema Stan Brakhage , inside of the seasons Absolute Frame, Absolute Time and Absolute Sound . Moreover the programme includes the following films: the modern classic Instruction for a Light and Sound Machine by Peter Tscherkassky, The Flicker by Tony Conrad, Battleship Potemkim Dance Edit (120bpm) and Weekend by Walter Ruttmann .

The section Artists in Focus will also present Mika Taanila and Rose Lowder , who worked on the boundary between photography and filmmaking for over 30 years. Future Cinema will deal with the possible developments of future cinema, including the film Monochrome Transporter by Thomas Kubli, the works by the USA artist Cory Archangel and Light Reading(s) by the USA sound artist Stephen Vitiello .

Like every self-respecting Audiovisual Art festival, also Sonic Acts will give space to its performative essence. Over 3 days the most famous international artists who work on audiovisual research, both from a technical and aesthetic point of view, will perform on stage. On the opening day, the sound collective The Drone People (CM von Hausswolff, Hilddur Ingveldardóttir, Stephen O’Malley, BJ Nilsen, Joachim Nordwall, Mika Vainio and C. Spencer Yeh), a group founded on occasion of the festival, will present a preview of their project 24 Hour Drone People. While the second day will see artists like Leafcutter John, the trio Signal (Alva Noto, Frank Bretschneider, Olaf Bender) and Pita ; besides, on the closing night, such artists like Bruce Mc Lure, D-Fuse, Tez, Ulf Langheinrich and the extraordinary Ryoichi Kurokawa will offer an overview of the most recent experimentation in the field of live media.

Ops, I was forgetting to say that even Otolab will participate with their project Circo Ipnotico, already present in Holland last November at the Strp Festival in Eindhoven. We can say that although the indifference of the institutions, something is moving.