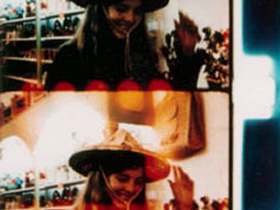 “Xcèntric” aims at promoting cinema and video productions which re-discuss images and define the medium through experimental means and intentions. Therefore, it recovers works kept secret or long forgotten through the audience’s intimate experience.”

This is the self-definition of Barcelona ‘s Xcèntric, a reoccurring event at the Center for Contemporary Culture (CCCB) which presents a program of break-through and innovative screenings and offers the chance of browsing through a rich archive (from the historical, artistic, aesthetical and technical point of view) on a completely personal basis. One of the initiative’s best features is its ability to provide a long (deeply bound to the origins but extremely keen on all that’s contemporary) and wide (not related to geographical and political reasons – something pretty rare around here…) glance.

Xcèntric’s first edition took place in 2001 and the festival has grown ever since, widening genres and themes, while always sticking to personal creations and independent productions – both hard to find and in contrast with the standard formal language and aesthetics. Directed by Carolina López, produced by Angela Martinez and coordinated by Neus Carreras, this festival has seen a whole new wave of events taking place between December 2007 and January 2008, and the program for the next two months is already scheduled.

A whole week would not be enough to enjoy all the treasures that can be accessed through the multimedia interface, while comfortably sitting on a couch. There’s place for almost instant-like short films and for long features, for historical colossuses like Eggeling Viking (Symphonie diagonal  1921, with Hans Richter, his only feature before his death in 1925), Oskar Fischinger (one of the creators of animation cinema active since the 20s, who also inspired Disney’s Fantasia), Francis Picabia and René Clair (Entr’acte – 1924), Dziga Vertov (Entuziazm 1931), Jean-Luc Godard (world famed member of the Nouvelle Vague), Norman McLaren (Pas de deux – 1968, among others), Yoko Ono and Albert Fine (artists from the Fluxus group) to mention but a few and make our way through different historical periods, arriving to contemporary productions, mostly produced with better technological equipment and often blending different arts.

Among these, it’s worth mentioning Timo Novotny (young and talented member of Sofa Surfers; the archive includes Neon , a 2005 5-minute film based on a neon pipe installation by Nik Thoenen), Dario Azzelini (living between Berlin and South America; in 2002 he shot together with Oliver Ressler Disobbedienti, a document on what happened during the notorious G8 in Genoa), Granular Synthesis (an Austrian duo composed of Kurt Hentschläger e Ulf Langheinrich, dedicated to images and sound manipulation, the latter generally quadraphonic, producing installations such as Reset , presented at Venice Biennale in 2001 and later turned into a video, or Modell 5, based on Akemi Takeya’s video recordings and projected on 4 separate screens) and Leo Scahtzl (born in Austria in 1958 and more inclined to video installations).

José Val del Omar stands out among Spanish directors; he was born in Granada in 1904 and died in a car accident in 1982, leaving a whole series of projects unfinished. Inventor of PLAT (or Picto-Luminic-Audio-Tactile) techniques, he shot movies on the three elements (Water-mirror of Granada, Fire in Castile and Galician Warmth  of mud) with the intention of shooting a fourth feature to be the focus of the Elementary Tryptich of Spain. His sudden death made this impossible; however, Eugeni Bonet, a colleague and friend who shared many of his thoughts and intentions, tried to bring the project to an end.

The director was present at the screening of Tira tu reloj al agua , one of the night events which also featured the presentation of works included in the new Xcèntric program at the CCCB auditorium. This film re-elaborates the original Val del Omar materials and techniques to get to Eugeni Bonet’s personal view of the project; it also draws inspiration from Val del Omar’s original notes.

The result is an extremely charming film, also thanks to the music score (Bonet left it to FMOL Trio, composed of Sergi Jordà Pelayo, F. Arrizabalaga e Cristina Casanova), switching between extremely carnal images (the plants of Andalusia and its large architectures packed with tourists) and others which are incredibly abstract (a reproduction of pierced films and other techniques used by Val del Omar). The celebration of such images without a history reaches high levels of poetry, and is never banal.

A very entertaining and stimulating event was the one featuring English directors Miranda Pennell and John Smith, the first focusing on relationships (among people, between the people and the environment, the camera and the subject), the latter on ambiguity and the different meaning objects assume in different contexts.

Miranda Pennel, formerly a dancer with a high choreographic sensibility, presented You made me love you (an interesting experiment in which the camera does not follow the action; on the contrary, the operator moves and the dancers always have to try to stay in shot), Fisticuffs (a British western taking place in a pub attended mainly by elderly people who – from casual walk-ons – turn into the main characters), Tattoo and Drum Room (exploring the ritual gestures of the British army and the contradictions within a percussion instrument school – which don’t reach the same level as the previous two features).

John Smith presented 5 of his works, among which largely stood out The Kiss , already awarded during the 2000 edition of Palermo’s Festival Internazionale di Videoarte e Cinema Sperimentale “L’immagine leggera” (this city must have had an impact on Smith, as suggested by the sound recording in Piazza Maggiore at the end of Lost Sound ). The petals and pistils of a beautiful white iris open up until they break the screen (or the camera lens?) as if it were glass. Originally it was an installation where images were screened in mirroring on two hanging glass screens, the illusion of them breaking often causing the audience to move away. The feature was shot in real time, by inserting the flower between two layers of glass which were gradually pressed harder against each other, until the pressure made them break. This is also the reason of the two screens included in the original version of the installation.

Two very entertaining John Smith short features are OM (a haircut turns out to be much less mystical than expected) and Gargantuan (a one-minute tribute to miniature, commissioned by the Arts Council and BBC2’s The Late Show). Finally, as interesting as naive and containing plenty of non-fully developed elements, two longer features: Blight , the story of houses destroyed to make space for the M11 (among which also Smith’s own house), rich in metaphors and featuring music by Jocelyn Pook; and Lost Sound , a story which gives a voice to audio tapes found abandoned in London, trapped in barbed wires, trees, gates, street lamps and antennas, produced in collaboration with sound artist Graeme Miller.

Digicult also attended a welcomed last minute event (due to the impossibility of screening the James Benning works in program): Jonas Mekas’ Award presentation of Andy Warhol, Happy Birthday to John, This side of paradise – Fragments of an unfinished biography. Jonas Mekas, born in Lithuania in 1922 and considered the godfather of American avant-garde cinema (he currently lives and works in New York) has collected countless awards thanks to his apparently home-made videos which, besides including well known characters such as Andy Warhol, Nico or John Lennon, feature rhythm and image treatment which turn them into small masterpieces, documentaries turned into novels, tableaux vivants leaving the viewer with burning eyes and altered perception, but also with the feeling of having taken part in a story told with deep affection. This is peculiarly evident in This side of paradise , the story of the childhood friendship between the children of Jacqueline Kennedy Onassis and her sister’s, Lee Bouvier, during summer holidays in Montauk. A significantly moving element is given by the relationship between John F. Kennedy Jr. and his cousin Antony S. Radziwill, which will last for all their lives, include their respective wives and end with the two men’s tragic death.

Xcèntric screenings will continue; we recommend to those who have a chance to go to pop by even without knowing the program: the selection (which shows passion, competence and a good taste) is definitely worth being trusted, and it will offer the chance to discover a few directors who heroically dedicated their talent to secondary areas and whose existence is unfortunately unknown to most of the audience.