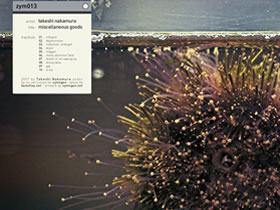 Is it the internet the future of music? This could be the beginning question to start a reflection about the netlabels universe, a word that is filling the web pages during last years, and not the musical ambit ones.

But what is a netlabel? A netlabel (also online label, web label or MP3 label) is a record label that distributes its music primarily through digital audio formats (mainly MP3 or Ogg Vorbis) over the Internet. These music-files are often called netaudio. While similar to traditional record labels in many respects, netlabels typically emphasize free distribution online, often under licenses that encourage works to be shared (e.g., Creative Commons licenses), and artists usually retain copyright. Most employ guerrilla marketing to promote their work; few netlabels earn money for participants. (From: Wikipedia)

These are the principals characteristics of a phenomenon that, started as niche situation, is growing more and more interest, collecting a growing number of artists and lovers, giving birth to a series of festivals and manifestations of high level, such as Quartz Awards, out-and-out festival dedicated to netlabels that is held in Paris every year.

We talked about that with Filippo Aldovini, deus ex machina of Zymogen, italian netlabel that produces and distributes high level releases with an international touch.

Giuseppe Cordaro: How and when did you decide to create Zymogen?

Filippo Aldovini: The idea was born by the need to valorize a passion for a sound that was not easy to share in a little reality such as Modena, the city I live in. The absence of a scene where I could lean on and to which refer to, brought me to cut all the links with the local dimension, and this radical imprinting projected the entire project on the Net, the non-place where i found unimaginable inspirations and resources.

There’s no need to say that the principal source has been the net-audio scene, that I started since 2004 following with constance and passion. I’ve been astonished by the foresight of some realities such as Thinner, 12rec, Test Tube and Khavi who worked ethically and qualitatively. Thanks to the Net, I got in touch with artists of high level from all over the world, who believed in my project since its born. Artists such as David Velez, aka Lezrod, first producer that published on Zymogen in September 2005, with whom I had a confrontation and I experimented, making “Retorno a la Nada”, the debut album for Zymogen and Lezrod, being nominated in 2006 as best album of experimental electronic music at Quartz award of Paris, winning the selection of Pierre Henry, pioneer of concrete music. I think now that this path couldn’t have had a better start.

Giuseppe Cordaro: Which is your netlabel genre?

Filippo Aldovini: Every single release has been the result of a research in different sound areas. As time went by, the digital and ambient minimalism became the guide line of the label, but I’m pretty sure about the value of changing, so I don’t want to fix rigid limits to the future sound.

Giuseppe Cordaro: Is there netlabels you’re inspired to?

Filippo Aldovini: I attentively follow the scene around 12k and its parallel projects: Line and Term netlabel. I admire Taylor Dupree, the coherence and professionalism that fulfill his projects, his devotion to design and quality of his publications. Type, Raster-Noton, but also less known projects such as Anticipate and the Greek Poeta Negra are some other reference labels. Talking about web realities, I’m very close to all the netlabels I worked with or I had artistic exchanges, such as Serein, 12rec, Miasmah and Autoplate.

Giuseppe Cordaro: Which is your role inside Zymogen and how are the creative processes managed?

Filippo Aldovini: I’m the manager of the project, and this means I’m in charge of every detail in person. Artistic direction, communication work, on-line promotion, contacting the artists. The only collaborator, Tomaso Neri, designed the structure of the web site and its code, a fundamental aspect for a project that prefers the on-line dimension. Talking about my role, I choose the human contact with artists that is active part of the creative process. I completely mirror myself in Manfred Eicher words, founder and director of the ECM, when he says “…I never dispute style, that is up to the artist, but I’m convinced that music is born before being recorded and I like talking with artists about intonation, time. I like being the active listener, a mirror for the artist. But I search for its sound, not mine. The only unifying track is the clearness of sound”.

Starting from those presupposition and caring about all the musical, graphical or content details, I always try to keep the qualitative standard at the high level I tried to achieve from the first day.

Giuseppe Cordaro: Your releases are characterized by a researched graphic and a particular aesthetic, could you say something about?

Filippo Aldovini: The aesthetic aspect is a fundamental aspect of Zymogen identity. The net releases thousands of inputs on our memory, and that’s the reason why it is fundamental, now more than ever, to leave a sign with a striking image that has a strong link with sound. There’s no difference between scanning CDs filed in shelfs and staring at the screen that proposes virtual covers of netlabels catalogues… The quick glance will make people curious and perhaps interests the potential listener.

Giuseppe Cordaro: Zymogen, from Modena, published international releases. Does it have an strict editorial line or does Italy lack of worth projects?

Filippo Aldovini: Zymogen is an international project, the fact that is situated in Modena is only an indication. I’m convinced that Italy has interesting projects, but there’s no disposition to relate with the Net, prejudices against netlabels are still spread, but I think that time and valid projects can make netlabels and quality walk together.

Fabio Battistetti is working in this direction. He’s the soul of Chew-z and agitator of the Netaudio Italian scene. He organized a discussion forum about the last Club to Club edition (that will double at the 2007 Live Ixem edition) and he created one of the first radio programs about Netlabels (http://walkman-podcast.blogspot.com/). Once this is clarified, I want to precise that there’s no intention to exclude Italian artists by Zymogen roster, I simply found the international proposals more interesting. Anyway, this year we’ll brake this barrier as well, finally!

Giuseppe Cordaro: How do you see the confrontation between netlabels and classic labels?

Filippo Aldovini: I think they’re interpretable models, with limits and potentialities. I think the future is the union of the two structures that are already experiment this direction. I’m talking about 12rec, Miasmah of Erik Skodvin or the same 12k of Deupree that has a sub-label, called Term, that publish online artists related to 12k. I try to consider Zymogen as an open source structure, opened to the influences of discography, not closed to discussions with users.

During those two years I received lots of agreements and the requests to publish our material on fix support are increasing, and that’s the reason why I’m taking the solution more and more seriously. When I would have to spend money on Zymogen, I would do it conscious to have a users background already linked to the project that already known the qualitative level of our output.

Filippo Aldovini: For sure! Creative Commons represent the pulsing heart of the netaudio phenomenon and it is one of the few institutions able to understand the need to exploit the net in all its potentialities. The modularity of the CC license is what mostly fit the online contents that accept the reproducibility as way to achieve a bigger audience.

Creative Commons is an alternative to “copyright” and “copyleft”, as it mediates the extreme consequences of both of them. This mediation ability, this interpretation of needs, the necessities of all the users that create contents are the success keys of this project. I consider CC as an interpretation of the author rights that keep in mind the technologies potentials.

Giuseppe Cordaro: …what about netlabel future?

Filippo Aldovini: Netlabels future passes through a higher knowledge and a serious auto-critic. A bigger coordination between the guides of the phenomenon would be appreciated, as well as dialogue and disposition to consider netaudio in all its stylistic variations, without focusing on a particular genre. There’s also the problem of low level netlabels, even if such projects are destined to fail and being forgot. The important thing is not leaving the idea of netlabel as distributor of music without contents pass. Netlabel is a structure, a box to fill up. The content itself gives value to the project. Music is talked again, music makes the difference.

Filippo Aldovini: As I already said, I’m realizing the first physical release of Zymogen, but there’s no deadline, so it will be ready when the final product will rise to the occasion. The website will begin 2008 with two releases, an EP by Letna, Parisian producer, coordinator of StandardKlik (http://standard-music.net/ ), near to Keiichi Sugimoto sound ( Fourcolor, Filfla, Minamo), and then it will be con_cetta’s time, Italian reality of whom we’ll have the possibility to publish the EP that precede the album for the English Moteer ready for June.