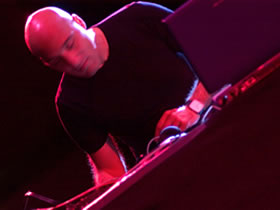 Martux_m aka Maurizio Martusciello, composer, musician and performer since more than 10 years, builds with his sound work and research an important interpenetration between traditional concrete and electro acoustic music and the synthesis of the digital electronic.

His path is open to contamination, to research of overlap between genres, through which he sees new codes of sound languages creation. A stimulated and good research thanks to the constant confrontation and collaboration with musicians, visual artists and video artists. X-Scape, one of his most recent works, was born from the meeting with the video artist Mattia Casalegno. Born in 2005 as audiovisual project, presented in numerous international and Italian events, for example Montreal Mutek Festival and IXEM Venice Festival, X-Scape has been recently elaborated by the authors as a/v trip in seven tracks, presented in June in limited edition DVD, produced and distributed by Persistencebit.

All the chapters are built as a crescendo, a progressive sedimentation of sound and visual atoms. So, when the first tracks move in a minimal landscape of little acoustic data, distilled by the emptiness together with feeble texture of vectors, the rhythmic game between acoustic stimulation and silence is complicated through the hybridization with dusty sounds dirtied by hidden glitches that move between video textures in subtile equilibrium between organic and inorganic.

We met the authors while presenting X-Scape as multi-screen presentation at the Auditorium Parco della Musica in Rome dated 14th December.

Claudia D’Alonzo: Maurizio, could you tell me how was the project born? How was the live concept ideated and how did you produced the DVD?

Maurizio Martusciello: X-Scape project required lot of time. Everything started from a desire, the desire to escape a language. We’re into language and language creates errors, language it’s only black holes. Here’s were X-Scape desire starts. X-Scape let the significants do the talking, it lets them go away, he lets them escape the obvious. “Desire” as seduction secret, as something before happening must have the time to be necessary. Here’s where my first audio-visual work named X-Scape begins, with the precious collaboration of Mattia Casalegno, who exceptionally enriched and developed this project.

The production of a DVD was the following idea, a re-building of the live work. So, no more shapes, but kinematics relationships. No more subjects, but dynamic objects without subjects, who constitute collective chains, a plan of longitude and latitude that opposes to an organization plan. Creating middles that are fervor of creation, to be a stranger in its own language.

Claudia D’Alonzo: How did you structure the DVD path? I noticed there’s a crescendo of both video and sound complexity…

Maurizio Martusciello: “Complicatio” against “semplificatio”, for sure. In occidental societies, market laws are more and more projected to a direction where the common opinion and the strengths are deeply established. New experimental arts must ask themselves how to escape and refuse to be the manifestation, the mark governed by the show managers, by the “killers of art” as Situationists said, who are able to uniform the differences and repress every language of opposition inside the huge systems.

To oppose this, we must think in terms of net systems (x-scape) that pass over the states, over the globalization politics, the uniformed opinion. We must build a complex level where existential different visions can live, can run away from a general program that completely cancel every possibility to diversify or change. Claudia D’Alonzo: Mattia, you started as visual artist inside clubs, being a vj, getting more and more involved in live media, realizing a/v projects together with musicians. How did the meeting with Martusciello influenced your work?

Claudia D’Alonzo: Mattia, you started as visual artist inside clubs, being a vj, getting more and more involved in live media, realizing a/v projects together with musicians. How did the meeting with Martusciello influenced your work?

Mattia Casalegno: I had the opportunity to meet Maurizio almost at the beginning of my work and I owe him a lot, as human and professional as well. Before being an artist I respect, he’s a brotherly friend. He always gave me faith and confidence. It is an honor to work together with him, and he’s also inspiration to me. I’ve been known him since 2001, thanks to our common friendship with Massimo Cavenacci, at that time professor of Cultural Antropology at Rome “La Sapienza” University. I had the occasion to participate to one of his multimedia shows organized by Cavenacci, where I projected the video part and where Maurizio together with FIlippo Paolini (aka Okapi), duo called MetaXu, created the audio part. Suddenly, it was affinity and I entered the duo, contributing to the visual part of their performances. MetaXu experience unfortunately ended in 2003, but our friendship and reciprocal trust is still living and brought us to X-Scape, when Maurizio asked me as video artist, to translate his intuitions and ideas in images.

Talking about me, I started experiment with “live” video at the beginning of 2000 with Kinotek, duo founded by me and videomaker Giovanni D’Aloia. As in the beginning Kinotek worked as club vjing, as time went by we worked more and more to projects and collaborations that were installations or theatre. At the same time, I collaborated in “live media” or “live cinema” projects”.

Claudia D’Alonzo: The video tracks that mostly hit me in X-Scape are those in which the vectorial sound analysis mix to material elements, video textures and pictures. Mattia, would you like to talk about the creation of these tracks? How did you interpenetrate organic and inorganic?

Mattia Casalegno: Actually this “interpenetration”, the imaginary zone between “organic” and “inorganic”, can be one of the conductor of X-Scape. We tried to give a visual perspective of this interpenetration with insertions and overlaps between the most “abstract” materials, such as shapes generated by algorithms or sound analysis, and more “concrete” elements, filming with cameras equipped with powerful macro lens, natural substances. I think the synesthetic result that emerges from X-Scape is focusing on the intuition of turning “invisible strengths” into visible ones, is turning tensions, powers and fluxes into sensitive concepts that expand the real.

Claudia D’Alonzo: Deleuze has explicit references in this work also inside the DVD packaging. There are printings that quote his texts. How did this author influenced the X-Scape project?

Maurizio Martusciello: Foucault said: “One day, maybe, the century will be Deluzeian” and Gilles Deluze left a big heirship through his thought. X-Scape begins from his ideas of resistance, where art represent the only creative strength able to change our social and political conditions. Our societies are more and more alienated by the universal values, heterogeneous and particular. Racism, xenophobia, violence substitute principles.

Up to now, homologated ideas invaded our lives. Publicity and malls impose the common taste, are habit-forming to be able to organize our lives. Deluze, through his creative thought, turned philosophy into something that created concepts. He taught that the enunciative and aesthetic creation root destroy everything that can be dominated by the programming of capitalistic system values. He taught that the only way to “resist” is being in a “guerrilla”, and the aesthetic practice is one of these creative possibilities to avoid the removal.