Live!ixem, The Five Days Of Palermo 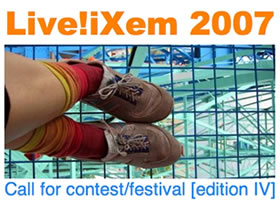 I’ve been recording all I can see and hear and sometimes even what I cannot see for about 40 years.Many of those recordings, which include despicable, dangerous and sublime sounds, have become my music. – Alvin Curran.

Il Live!iXem, a music contest and festival of audiovisuals, mixed media and experimental electronic arts which is organized by Antitesi, is continuously changing. This year’s fourth edition has ben still characterized by the most advanced research in creativity.

This is the only contest in Italy, as far as typology and method are concerned, which is dedicated to all those Italian artists who uses new technologies applied to the arts, particularly focusing on the relation between sound and image. Every year the festival has moved from one place to another and changed its structure: what has not changed is the honesty with which the contest has been carried out and the carefulness with which the programme has been drawn up. After the first two editions (2004 and 2005) in Venice and the third edition between Rome and Palermo (2006), after many difficulties and incoveniences, this year the festival will be totally held in its native city: Palermo.

Live!iXem‘s aim is to highlight the works of those artists who use a combination of performing expressions (music, videos, dance, theatre) completing them live with digital, electronic and cinematographic audiovisual devices in order to build an active relation with their audience. Let’s start though from his first step, trying to take stock of the situation.

Year after year the pattern of the contest has always been particularly effective in promoting the involvement of emerging national projects and in helping their performing development.

The rules to enter the contest are besed on transparency, which is a peculiar characteristic of Live!iXem. The participants have posted their submissions on iXem’s podcast (http://www.ixem.it/pages/podcastblog.htm) and their works have been thus showed to everyone. The very participants have then become part of the jury and thus determined the result through their right to a single vote.

There are five audiovisual projects which won the contest and will become part of the award dvd produced by ANTITESI, the association which created and organizes Live!iXem: Lunar III by Alessandro Fiorin Damiani and Davide Lorenzon, Going Home band La Jovenc e Devis Venturelli, B-Light project   by Headvision, Nadessja and Eniac , Ferseht(o)urm by Anna Bolena, EXEAIO – Draw 01  by Kuri.O and 8080 .

Through an experimental path, the artists shaped, built, deconstructed and interpreted sounds, images, and performative arts, each according to their personal aesthetics.

Live!iXem’s results are the proof that Italy’s artistic liveliness should not fear comparisons, it is willing to hear suggestions and criticism and is open to artistic and cultural exchanges.It is through its change in shapes and structures that Live!iXem evolves and renews, playing also the role of developing social relations as well as international cultural and artistic exchanges.

Music outside conventional performative spaces, the electroacustic experimental composition and interdisciplinary electroacustic improvisation are the topics that characterize Alvin Curran artistic and musical career and that will be showed and explained to the participants during the three-day laboratory.

The great cultural renewal at the beginning of the twentieth century was a turning point for music, which was influenced by the artistic avant-garde of that time. Music and its writing broke their ties with the past once for all and created aesthetic concepts and techniques which led to huge possibilities in artistic and musical creation. As time has gone by, digital technologies has become very versatile and has integrated more and more with traditional instruments, thus creating new hybrid instruments which has greatly expanded expressive possibilities. In the same way the relation with the actual and performative space has changed: not necessarily the concert hall, the performance can be held outside, where the space is open and full of “contemporary sounds”. Music, mirroring our times, has become the place for experimentation aiming at destructuring conventional patterns which can regain contradictions and extremes.

The lab held by the musician Andrea Valle, is more connected to musical computer science. The musician , a very skilled programmer, will introduce the participants to the use of the software Super Collider .

An artistic, sociological and social interpretation to think about the current state of experimental electronic arts and their relationships with the new media and the web, looking for new scenarios of interpretation and use. All this, together with very interesting workshops and conferences open to the public in the afternoon.

During the meeting called Geography: from signs to sound, Andrea Valle shows how the software Super Collider works through the presentation of Geography, a formal system to organize the audio material which he himself invented.

The second public workshop of the afternoon has a historical-documentary film approach in dealing with the topic of new technologies applied to the arts and the relating new social realities. It is QOOB (a multimedia project developed by Telecom Italia Broadcasting and MTV which brings television, the Internet and mobile telephones together and ISBN edizioni (publishing house belonging to Il Saggiatore group) together presenting a DVD called TECH STUFF, the first TV series about electronic music created by the young Giorgio Sancristoforo .

The third workshop, called Netlabels & Creative Commons, was a videoconference during which Fabio Battistetti, Giuseppe Cordaro, Filippo Aldovini, Luca Sciarratta spoke . It was a consideration on the important subject of independent production’s new frontiers.

The part of the festival which was dedicated to screenings was the result of Live!iXem’s cooperation with different national and international realities such as the Israeli duo Duprass with their videos Limbo Sketches e Free Fields , Digicult with the audiovisual exhibitions Visual Musik (edited by Marco Mancuso for Dissonanze 2006) and +39: Call for Italy (edited Claudia D’Alonzo for Cinematics 2007) and DJCINEMA, a project developed by Alessio Galbiati and Paola Catò which focused on the importance of the relationship between “dj culture” and the kind of cinema which aims at creating alternative forms of use and cultural production. Their exhibition was called Zerofeedback Vol. 01 (edited by Giovanni Artigliano aka Selfish) .

Moreover, there was Optofonica project, which was started by Tez (Maurizio Martinucci) in 2006 and is now developed in cooperation with the Optophonic foundation in Amsterdam. Optofonica is a platform showing the current state of art, and it is particularly interested in the synesthesia between different media and sound research development.

For four years Live!iXem has supported and hosted sound and audiovisual experimentation, not only giving a chance to young people and artists at their debut, but also showing famous artists who alternate on the festival stage thus promoting an exchange of ideas between national and international realities.

The live performances by the Swiss-American Ursula Scherrer and the Italian musician Andrea Valle duo will be chacterized by audiovisual improvisation saranno quindi campo d’improvvisazione audiovisiva per il duo composto dalla svizzero-americana e dal musicista italiano. Anna Bolena will be performing with the work which won the Ferseht(o)urm contest . With the support of the Netherlands Embassy, Live!iXem hosts this year the perstigious project LEAMO (Loos Electro Acoustic Media Orchestra), with Peter van Bergen, Anne La Berge , Petra Dolleman and Jan bas Bollen. The group will be presenting, with different combinations, two sets of compositions for instruments, electronic and live video. The ending show, supported by the French Culture Centre of Palermo, will be the prestigious Sensors_Sonics_Sights, which will show the audience an interdisciplinary live performance mixing body and its movements with music and live videos together.

As in the past editions, the presence of foreign artists confirms Live!iXem’s main aim is to favour an exchange between national and international independent experimental electronic music.

The absence of winners among Italian artists on the contrary, highlights the lack of interest and the indifference of national and local institutions, which disadvantage Italian artistic-musical scene and its development. Live!iXem is an independent and self-management production based on the sharing of purposes, approach and interests of people who spontaneously gathered in a network to develop cultural, artistic and social projects.

A symbolic yet special award goes to ANTITESI which, in a city as conservative, blind, deaf and dumb as Palermo, through Live!iXem yells the silence of those artistic voices which are smothered and lost among the loud noise of non-cultural initiatives supported by institutions.

That has been just a presentation of what Live!iXem’s IV edition is and will be. All I am waiting for now is to enter this little great world, to breathe, listen, look and store everything it will give to me and write about it next time!!! .