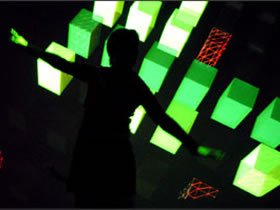 Sold out for Cultania Festival, organized by the councillorship for Culture, within the project “The Multimedia Centre of the Archaeological Park ” (Por Sicilia 2000 – 2006  ” Catania , metropolitan city”).

To say it with figures, ten thousand people for two-week theatre events, from the 13 th October to the 4 th November 2007, 450 spectators only to Roberto Zappalà and Giovanni Sollima performance, 1800 to the event Soundwalking on Etna lava sand with Alvin Curran , one of the pioneers of environment music who founded Musica Elettronica Viva together with Stefano Zorzanello, a musician from Veneto who lives now in Catania. The whole staff, headed by the dynamic Salvatore Zinna , the film and theatre director who conceived this festival, has all the rights to be satisfied with it. Cultania Festival is especially dedicated to contemporary performances and to the theatre combined with technologies in a city, Catania, which is living a great euphoria period, both from an artistic and experimental point of view, inside of extraordinary active spaces, which significantly contributed to the success of the event (from Zo-Centro di Culture Contemporanee, to Scenario Pubblico run by Roberto Zappalà, trough to Teatroclub run by Nando Greco and Teatro Sangiorgi ).

The considerable Cultania portfolio included: four theatre companies from Catania , six nationally and two internationally acclaimed companies, national previews and workshops. Among them Teatrino Clandestino, Wee Company, Masque, Daniela Orlando, Lenz, Roberto Latini, Fabrizio Arcuri . We have to thank the animator and festival promoter Zinna for designing what he calls “the publishing project” of Cultania and for the uneasy search for financial supports from the European Union. Cultunia is a real innovation inside of the national scenery for what concerns research events dedicated to the most pioneering proposals in technologies on stage for theatre, dance, music, visual arts, in a complex gendre intermix: from sound spazializations to special soundwalkings that combine ecology, landscape and sound, through to the theatre that uses videos and interactive interfaces. Cultania is a real Catalonia-Catania brotherhood that saw the alternation of Marcel.lì Antunez Roca with his Protomembrana and [Kònic thtr] , an artistic platform dedicated to contemporary digital creation, both coming from Barcelona .

Italian preview for Noul_D by Konic THTR, founded by Rosa Sánchez and Alain Baumann , never in Italy before the premiere in Catania. It is a very strong and sensational technopolitical show, and not just for the interactive technology that has been used (digital video cameras for the optical capture of the dancers’ movement amid the space, biosensors applied to bodies for motion capture).

Italian preview for Noul_D by Konic THTR, founded by Rosa Sánchez and Alain Baumann, never in Italy before the premiere in Catania. It is a very strong and sensational technopolitical show, and not just for the interactive technology that has been used (digital video cameras for the optical capture of the dancers’ movement amid the space, biosensors applied to bodies for motion capture).

Noul_D is as an electronic interactive show for dance and voice, especially set up for Cultania, with some changes compared to the previous version which was presented at the Mercat de Flor in Madrid, about identity, marginal territories, urban and human suburbs, where human beings become unstable particles, in the endless mutability and uncertainty of a world broken to pieces, in a waste land. Let’s take advantage of our visit to Catania in occasion of the Italian preview of Konic to talk to Salvatore Zinna, the true essence of the festival. He is about to release his first feature film and is also a playwright and theatre director (among his works Ballata per San Berillo , which has been really appreciated).

Salvatore Zinna says that “Technology, also high-technology, is not a niche product, it is popular, more than the traditional Sicilian cart. Nowadays technological consumption is widespread, universally accepted also in art. Then everyone can give his own interpretation. But thanks to technology you lead people to theatre and theatre must be attended by everyone, it must not be considered just like a research exercise for few people. Moreover we must discredit the rumour that associates Southern Italy with tradition and Northern Italy with innovation. It is first of all a cultural problem and not economic and it is related to the interpretation of present time. Thinking that if living in Southern Italy one can just be a repository of historical memory, involved in past revalorization, or is the final user of someone else’s cultural models is a limit.

I tried with the festival to set some fixed points, in order to reach some aims: escaping from isolation and on the one hand putting the first infrastructural basis for the cultural project we have imagined, trying to create our own “present culture”, on the other hand generating an active context in order to give evidence to the whole system rather then to the single realities. We have placed means, spaces, visibility and instruments at disposal of those who work within independent productions. I wanted to give birth to a companies network, organize a network made of artists and institutions that otherwise would have never worked together, by creating the conditions for mutual collaboration platforms, that is to say some prototypes for possible future developments. Throughout the territory there are several companies, associations and artists who work following a precise direction, some of them with a well defined identity, for example Cane Capovolto (Alessandro Aiello) and Zo .

Some of them had already elaborated this particular approach we have immediately agreed with, but we needed an institutional representative. The Soundwalkin’ project by Alvin Curran was thought in collaboration with Ente Parco Enna and Sergio Zinna from Zoculture. We have been the producers of many shows, by sharing topics and reallocating resources throughout the territory in order to start circulation and offer high quality materials to the outside. Usually circulation is a problem for companies, but in Sicily it represents a problem for everyone: leaving from here is hard, exchanges are difficult and international relationships are quite rather impossible. Among the local shows, we recommend the soundwalks around the city (Sipario sonoro), a sort of journey through the sense of hearing, the sounds of the city in the cemetery, in the quay, in the subway when not used, on the waterfront through the godd offices of Stefano Zorzanello .

The group Statale 114 will bring their work, Van Gogh il suicidato della società , from Cultania to Teatro Arsenale in Milan in January; the real talented Fabio Monti presented an intense performance about Lampedusa where he used images in a very simple way, but they were able to arise emotions, focusing on inhabitants and on the temporary immigration detentiion centres. There was also Tino Caspanello, Riccione Award 2003. We also gave hospitality to many worthy works which have been relevant for updating the local companies, from Lenz Rifrazioni, to Roberto Latini, through Santasangre .

Also was intense the performance Slave in the Cave of the group VITE, founded by Emiliano Campagnola. It is taken from Plato. It shows a single actor on stage that plays the role of Socrates and Menone, alternating questions with answers about the possibility of virtue to be taught, in a video dialogue with his alter ego. The festiva has been amazing: full up theatres, sold out for every event, an interesting case for Sicily : a various and especially curios public attended the festival, not only experts.”

At Zoeculture we meet Stefano Zorzanello, a flautist and saxophonist dedicated to a research field near to acoustic environmentalism and sound landscapes who founded the Soundscape Research Group. He worked in collaboration with Giorgio Barberio Corsetti composing incidental music for Il RIsveglio, Barcas, Graal and Woyzeck . He realized for Cultania three urban sound walks and collaborated with Alvin Curran for the innovative and impressive event CONVERSAZIONI GEOLOGICHE , music in a natural environment at an high altitude on Etna slopes, in Monti Sartorius, Sant’Alfio, 1800 metres above the sea level, inside the natural Park with volunteer musicians.

“It is a low-impact-on-environment project, with non amplifications, close to the philosophy of acoustic ecology. 100 musicians worked on it, among voices, wind and percussion instruments. Also the town band participated. A modular musical score made up of 9 modules, conducted by me and Currain. Pieces performed while slowly descending in a row on lava sand till a tableland with natural echo areas, producing a suggesting acoustic interaction with the territory. At dusk 2000 persons were taken by coach or arrived with their own means of transport. In April we made an inspection and then started the workshops, opened to non-professional musicians too. The location was chosen for the beauty of the landscape: right below the volcano. The innovative character is represented by the fact we decided not to perform Mozart or chamber music on location, we didn’t perform what they usually do in a concert hall. We worked on the morphological characteristics of the territory and on a more symbolic level, on rough material. According to the Varèse’s concept of musique brut , the volcano is musical material.”

Finally we ask the director Salvo Gennuso, the founder of Statale 114 we met at Zoculture, to tell us something about his artistic contribution to Cultania Festival and his project Filottete taken from M?ller (with Elaine Bonsangue, Luana Toscano and Chiaraluce Fiorito) and Van Gogh il suicidato della società (with Elaine Bonsangue and Marcella Parito).

He says: ” Cultania meant to us working with calm on two different performances, experimenting new languages and exploring new avenues we never tried before. It meant performing our shows in a context that has an artistic mark I identify with, Fabrizio Arcuri and Roberto Latini . Cultunia has been a common platform to consider some issues, such as the combined use of different media. Filottete is a story about isolation, about death. Madness, detention, alienation, crows and predators, betrayal: our research developed from these words and from the Island of Melo we landed to another island, Sicily . Some say Sicily is like Denmark for Hamlet, a place where obscure plans are plot, where crows hang around Laws Courts, where betrayal is suffered like an offence against honour that must be wiped out with blood, where madness is one of the family, according to Pirandello. But the performance is not about mafia. I want to tell about prisons every human brings with him, like stemmata one’s shows not on his skin but on his soul. Van Gogh il suicidato della società taken from Artaud will be performed on the 9 th of January in Milan . The computer graphics animations are edited by Mammasonica. It is a very choreographic performance, which starts from the attempt to be enraptured by the text meant like a vision, not like a message or words. It is a dialogue among different art forms that imagines, in a way out of ordinary, the use of various techniques and the presence of expression forms where Van Gogh’s paintings, Artaud’s text and stage business are silhouetted against a white surface made of Plexiglas cubes and water. The “I” is in contrast with a three-women chorus, Erinys, Moiras and the multitude of a society fossilized in action.”