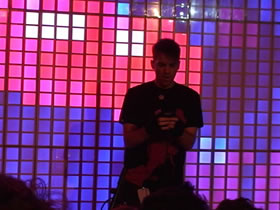 Game Boy’s devotees and Commodore 64’s fans: Blip Festival is back! For four days New York had been the centre of the electronic world of the 80s aesthetic and of its current reinterpretations.

This year the New York association The Tank together with the 8bitpeoples collective have brought the festival to the Eyebeam Atelier – a cultural centre dedicated to digital arts – to celebrate chiptune music and low-bit visual art proving that, rather than being an underground movement or the remains of the past, they have gathered more and more followers.

As a matter of fact, about forty international artists mixed 8 bit bases spanning from electro-techno-house to rock, or created visuals based on old fashion games. For some of them that was the celebration of their childhood they spent playing with the Game Boy , for others the discover from scratch of vintage-electronic devices. The reward for organizers’ passion and dedication, was the big and enthusiastic audience of what has been renamed the “Chip Music Woodstock”. Beside audio and video performances, there were workshops, presentations and the projection of the documentary film 8-Bit Generation by Lionel Brouet .

This year’s lineup included both “known artists” who performed last years and new artists who contribute to make the group of chiptune performer bigger and bigger. Tree Wave‘s noise pop, Bubblyfish‘s minimalism, The Depreciation Guild‘s ballads, Mark DeNardo‘s folktronic rhythms, Anamana­guchi‘s instrumental mix, Rugar‘s melodies Hally‘s experimentalism were some of the examples of the variety and flexibility of a genre which starts from basic means and develops blending with other musical traditions.

As far as visual works were concerned, artists reinterpreted the basic figurative aesthetics of Atari and Game Boy with a “leap in the past”.The much expected Festival’s co-organizers Nullsleep and Bit Shifter from 8bitpeoples , performed brilliantly, with their enthralling mixes of 8bits and electronic sounds.

Among the international artists, there were two Italian artists too, NrGiGa and Postal_m@rket. They said about the festival: “It’s interesting how the different styles, from different countries, here meet. The audience is actively more involved and American scene is definitely more mature than the Italian one, which has started to develop recently but which is growing though”.

Again this year the festival was a reference point for boundary music, a real crossing of scenes and styles, but most of all of the poetics that can be generated by modified situations, essential graphic styles and re-set sound chips, when creativity has no limits. Waiting for next year’s edition.