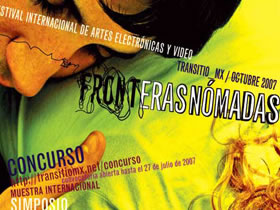 Six months after Interactivia 07, the New Media Biennale of Merida, and some kilometers further north, in the federal capital, the second edition of the Transitio Mx festival (12 th -20 th October 2007) finished, expositive and explorative project dedicated to the video and the creative use of technologies.

Transitio Mx developed in the Centro Nacional de las Artes, in the Centro de la Imagen , in the Laboratorio Arte and in all the public spaces of the city in the nearby of museums and artistic institutions. A huge organization, that counts tens of managers, producers, press agents, artistic directors and conference organizers, demonstrating that in Mexico something is moving, but there’s also an official instrumental response at the use of new technology in artistic ambit (as Arcangel Costantini said to Digicult almost a year ago http://www.digicult.it/digimag/article.asp?id=719 ). Transitio festival is organized by the Centro Nacional de las Artes, the Centro Multimediae and with the collaboration of the Instituto Nacional de Bellas Artes.

Mexico seems manifest for a proneness to productions and researches that involve technologies and media in context of procedural but also social experimentations. No more technologies tout court but rather analysis of their impact inside local communities (artist, activists, production and expositive spaces). Theme of the festival, named Fronteras Nómadas, allude to the idea of a frontier as fluidity space, as passage, as movement. The border seems to be fixed, even if actually is changeable as it assume shapes and attitudes of who’s trespassing it, of who’s stopping by or who’s penetrating it constantly taking each time the opposite direction.

The idea of the “wandering” frontier is born by the central idea of the exposition (one of the three platforms on which the festival is developed, as we’ll see) that wants to focus its attention on the community. The idea of the festival is to suggest a possible match between the geographic frontiers  image totally in line with our times, made of movements of vast communities to bypass the physical frontiers that divide them from the idea of a better life  and the disciplinary ones, which should be open, permeable and deconstructed to give space to hybrid projects and open works. As frontiers are opened, the communities who realize and share artistic practices founded on experimentation and hybridization of media are hybrid, open and oriented to commixture. They’re wandering communities because they’re mobile, as art realized in network is omnipresent and delocalized, without a specific graphic position.

Transitio Mx is articulated on three platforms: an exhibition, a symposium and a contest.

The contest, as the announcement says, is opened to producers and artists that work with video, sound NetArt, installations, performances and scene arts, and has been switched into three prizes. Sigizia, won with Identity States by the French duo Brad Kligerman y Jamil Mehdaoui; Transitio, won by the American Matt Roberts with the locative media cyclist project Cycles for Wandering; Transnational Communities, won by the collective formed by Ricardo Domínguez, Brett Stalbaum, Micha Cárdenas and Jason Najarro with their work Transborder Immigrant Tool.

The expositive platform has been noteworthy without any doubt, because of the huge quantity of projects and artists, and it has been realized in three sections. Síntesis libre, managed by Eusebio Bañuelos, Sarah Minter, Ricardo Rendón y Karla Villegas, proposed a series of performances (360 degrees, from Graffiti Research Lab in Mexico City streets to A/V performances of Arcángel Constantini or Fernando Llanos) and contextually their documentation and filing in the Memory Lab, who contains the memory of all the processes that brought to the realization of some events.

This way, the creativity goes through every action of the mind, from the artist one to the critic or curator that create a speech using not only the verbal or written language but also the creativity. “Every practice  confirm the curatorial statement  artistic act or product is a way to relate with the world”. Performances and action generated and discussed inside museums are transported in the urban space and presented as parties, games, T.A.Z. as the old Hakim Bey would say, to relate with a community of not specialized public.

(in).COMunidades, directed by Laboratorio 060 (lc060.org), collective of curators/artists/producers/organizers that built a path of actions and presentations in different locations of the city  not officially devoted to contemporary art.

Im_polis, run by Ale de la Puente , Rogelio Sosa, Iván Abreu, Karla Jasso. It’s maybe the most important and challenging of the festival, with 29 invited artists and projects expressively thought for the festival, among which Gustavo Romano, Young Hae-Chang Heavy Industries, Ricardo Miranda Zuniga e Lucas Bambozzi. Im_polis means “inside the politic”, to reactivate the discourse of the insertion of the art inside the social life, using artistic works that often delocalize their work from the artistic context to the real one.

The program of the symposium has been rich of interventions by critics, thinkers, international artists, a mix of “think local and act global”, where the pop-stars of the new-media think  as José Luis Brea  mixed to artists, critics and local academics to give space to a dialogue that resonated not only abstract but also concrete, giving voice to local projects such as Fran Ilich. Interesting the idea to divide the symposium in two sections, where the discussions variegate among art and politic, migrations, globalization, media and decentralization with some of the artists invited to Transitio, critics and international thinkers. The other parr, oriented to the practice, proposed a workshop on open source programs and their usage for multimedia editing (from video to text), filmmaking and even “open source tools for urban communication”, realized by Graffiti Research Lab.

Short parenthesis dedicated to the confrontation with the national paradigm (it’s necessary). The official push to new media and technology seems finalized to create a fresh image, young and new, parallel to the demands of the new Mexican governments (that conquered the power in 2000 after seventy years of Partito Revolucionario Institucional). The usage of new technologies seems kind of empty, a bla bla bla of neo-avant-garde notions mixed to some citations ad hoc of the strong philosophers, as Deleuze, Guattari, Augé and so on, and words of the new media ambit (interaction, dissemination, globalized media).

But only a look to the interview of the curator committee of the three exhibitions and symposia (contained in the web site poadcast), and you’ll understand that the investment in such projects by the institutions is not a blind choice. It means pushing on local intelligencies and giving the possibilities to those.