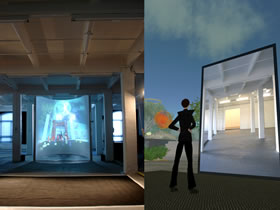 The Gate (or Hole in Space , Reloaded ) is an installation realized for the opening exhibition of the iMAL Center for Digital Cultures and Technology in Brussels (4 th -10 th October). Come up in Yves Bernhard‘s mind, manager of the iMAL Center , the installation was created to handle a only apparently simple question: how to build a bridge between real space and virtual worlds. The objective in mind was the enjoyment of virtual spaces and the interaction with their inhabitants in the physical space without the interaction of a graphic interface.

The problem is not new and the solution proposed  the showing in real space of a video-streaming from the virtual world- showed more times not to work. The Gate has not solved the problem and the found solution is far from being the definitive one. Yet a step forward has been made and many people have tried to go beyond the limit. But let start from the beginning

I personally had to face a similar problem just once in my life. In December 2006 I was offered by Mr. Luigi PagliArini to take part to the Peam in Pescara , Italy . There I decided to show a phenomenon I was following for a while: the performer Gazira Babeli, acting on the virtual stage of Second Life. It was the first physical time for Mrs Babeli and we watched her with great interest. At the end we chose to show 3 pictures (a self-portrait and 2 pictures representing 2 of her most meaningful performances) and the video-documentation of other performances. Also the idea of a Gazira Babeli’s live performance interested us, but we feared the final output. As all virtual words, Second Life lies upon conventions not for beginners, and we couldn’t take it for granted in the variety of audience attending the Festival. The visual aspect plays for sure a pivotal role, but in a live video you loose the prominent dimension of the interaction, as well as the fundamental aspects of production (the inside camera is directly controlled by the user, what let him have a global view of the world) and communication, most of the time by chat. If you take away the public all these aspects, you see on the screen an imperfect clip, without cuts, dialogues and captions. A limited use of a definitively more interesting reality.

As Dante in his journey through Hell, Purgatory and Paradise , we needed our Virgil, a “human interface” showing us the way in a world where we don’t get the rules. As Mrs Gazira is used to say, Second Life is at the end a theatre stage: we had to bring the theatre inside reality.

To do it we asked the Italian-Spanish curator Lele Lucchetti for help  and of course Mrs Gazira who was a friend of him in another life, agreed with us for making Mr Lucchetti her interpreter-. So, while the alien Gazira was executing in a live show her best performances (from Super Mario’s storms to the awful cans of Cambell’s Soup), Mr Lucchetti was translating the chats into words and briefly telling what was happening.

The cooperation was successful, but not completely. Despite Mr Lucchetti’s ability, what was happening in the screen remained distant from the public of the “Peam”, usually used to more direct and “sensorial” experiences. Unfortunately this distance was always present in all Second Life’s live performances, not allowing the quality to shine through the performance in act there. Moreover, if you take into consideration that Second Life is plenty of bugs and that time perception is by far more amplified than in reality, you can easily understand how important the problem is, as well as the right solution.

Waiting for it, Second Front is focussed on the Fluxus-Punk impact of its crazy performances, while other performers rely on the appeal of the audio-visual effects of their interventions. As far as I know, only two people, Eva and Franco Mattes tried to solve the problem. I had the opportunity to follow their performances on two projects ( Real Life / Second Life) on the 8 th September 2007 in Linz, Austria, during the Ars Electronical Festival. The Mattes tried for a new way: the obsessive control of the “preproduction”. Their performances  re-enactments of famous performances of the Seventies from Vito Acconci to Marina Abramovic- take place in accurately prepared sets and are entirely codified in order to avoid improvisation. Also production plays a major role. On this purpose there is an assistant who follows every single act for conveying the most impressive impact to the key-moments of the performances. In other words: the Mattes seem to solve the problems caused by virtual world just erasing it. They are not concerned in trying to make the screen appear as a video, on the contrary they do anything to do it, as the live TVs do for plays and operas.

Is seems that it works both for the real public and the audience inside Second Life -by the way, in a couple of occasions the artists didn’t show to pay much attention to inside spectators-. Their performances have a stage in Second Life, but they don’t look for audience there. In fact, the exhibitions are conceived for the real world, not for the avatar public.

Troubles arise when you have the ambition to involve both the two kinds of audience.

The Gate : the planning

I’ve got Mr. Yves e-mail in the last, oppressive days of August. In short, she upgrades me about Imail’s next opening and about a project she’d like to realise for the exposition, perhaps with my collaboration: ‘something very simple, a ‘Junction Point’ between the 2 worlds, a floor surface in both worlds where real user and SL user can meet.’ The idea is interesting, though not original. It deals with the construction of a mirror-stage in real and virtual space, allowing open happenings and various communication experiments. I do find interesting to give birth to a performance stage, an installation working as a “box” for a range of events spontaneously born by both sides. And I accept the collaboration.

In the following days, in collaboration with Mr. Yves and Mr. Yannick Antoine , the The Gate‘s irreplaceable architect, we define some details regarding concepts and design. The most immediate cultural reference are the holes in space and time among the classic science fiction parallel universes; the aesthetical reference is the colossal 2001 – A Space Odyssey , appreciated for its prominent minimalism. The artistic one that is also present in the title is Kit Galloway and Sherrie Rabinowitz ‘s memorable satellite performance realized in 1980 and entitled Hole in Space. It was composed of the installation of two mega-screens in two squares in NY and Los Angeles , connected by satellite and respectively broadcasting what was happing in front of the other screen. The unannounced event had produced at the time an increasing interest, from the first curiosity of passers-by to the next and also spectacular interaction attempts between the two groups of spectators. As in that memorable occasion, we do want the space beneath the screen to become the place for improvised performances, based on communication and interaction between people and avatars. To get our goal we rely on the symmetry of the two installations (a black carpet delimiting the action area, shot by a camera set on the side of the vertical screen, showing the other world). Beside delimiting the area, the carpet is useful to create a theatre space accessible to everybody, welcoming as a break-dance stage. We want to avoid the fear for the stage and on the contrary promote improvisation, Second Life’s soul: spontaneous theatricals.

Of course the place where to install The Gate in Second Life is fundamental. No doubt, to me: because of the community it gathered, the quality of the cultural offer, the particular attention paid to the performance aspect and freedom of action I do think the right place is Odyssey. We speak about with Sugar Seville, curator for Odyssey, who loves this proposal. We also think of involving the famous collective Second Front for the opening exhibition on the 4 th Octobera choice that is by far the right one./the best one.