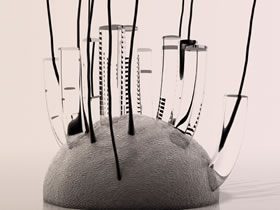 Some times writing a Digimag article is a little nightmare. No one of your contacts answers, the issue date gets closer and Marco Mancuso rightly starts asking for some material.

his interview is one of the rare cases where the article appears from nothing. I met Lorenzo Oggiano during an inauguration, and I didn’t link his name with anything specific. Once visited his website I though made the puzzle of name and face with the extremely fascinating “Quasi-Objects” projects, that I already had the opportunity to see. Hypnotic mutation of micro entities, laboratory flavor and contrast liquid smell. Well I couldn’t miss the occasion. More than the meeting with one of the few Italian experimenters that cleverly and consciously use the 3D, I had a fine chat with an artist with theory reflexivity out of common. Good lecture.

Bertram Niessen: First of all, can you say something about yourself, about your personal and artistic travel and how did you get into the work you’re developing during those years?

Lorenzo Oggiano: Happy childhood, unquiet adolescence in Vicenza. The time spent in Bologna was determining. I lived there from the ’86 to the ’97, divided between the freelance graphic activity and the usual frequenter of self-managed spaces. I graduated at the visual arts DAMS, with a thesis about the relationships between contemporary art and new technologies that occupied with enthusiasm lots of my time. From the late ’97, I moved to Sardinia where I found the right dimension, necessary to bring on my research.

Bertram Niessen: Where does your fascination for bio-technological hybrids started? It’s an argument that’s more and more spreading inside contemporary art. I think about projects such as Res-qualia, that you collaborated in, but also projects by Adam Brandejs, Oron Catts and Ionat Zurr. What do you think about the international panorama?

Lorenzo Oggiano: Well, there’s lot of artists with different methodologies and vision interested to themes interconnected to the relationship between corporeity and technologies, and the database of Res-qualia represent an excellent platform to start for those willing to experiment in this ambit. Whilst the technical-scientific progress gives during last years new and powerful tools to work and a new consciousness about the quality and strength of the actual transformation, I think it is important to underline the continuous contemporary research towards the fragmentation of the body that interested the scientific, artistic and philosophic modernity. For sure, the recent scientific discoveries and the power of those in different disciplines and applicative ambit throw a new light on the sense of life that we can see reflected in a determining way on the contemporary artistic experimentation. Art developed, with a more and more accelerated rhythm from the middle 19 th century, an important role of connection/articulation between reality plans often too much separated, contributing to open the body to the outside, founding it with the environment, de-naturalizing, de-structuring, turning it into something “philosophically available” to integration, recombination, projection.

With those premises, the (post)evolutionary prospective that’s delineating represent for every artist a further, stimulating opportunity to contribute to the pre-figuration and reading of the real. Whilst questions are numerous and complex, the international artistic panorama seems extremely reactive, positive to the confrontation and, as you observed, the proposed reflections find more and more spaces and attentions, marked by the perception of an urgency and sensibility that’s slowly but gradually changing.

On the social plan, the polemics between fans of creationism and Darwinism, the strong debate on bioethics, disposed by the necessity of operative answers to concrete problems, and many other signals call for the ineludible of those themes and the need to lead collectively a process that doesn’t have standard endings. As “participating observer” I’m interested to the biopolitic aspects, to the elaboration of a thought. I try to observe and interpret.

Bertram Niessen: You use several different techniques, but the one I found the most impressive it is the 3D, for its ability to conjugate imaginaries that we used to and visions equilibrated between formal elegance and microscopic hallucinations. How do you work in this sense? How do you develop those projects from the method point of view? Which is the relation between method and technique?

Lorenzo Oggiano: I usually choose technologies and instruments depending on projects. Evidently, when the works is technology itself  as for “Sound Generated Video Modules for Single Channel Output” , the plan can nothing but be different, even the method side.

In “Quasi-Objects”, even for the nature of the synthesis images itself, the modeling and 3D animations seemed to be able to give back the total sense of the research that, briefly, analyzes the progressive relativity of the natural forms of life after the techno-biological evolution.

A precedent valuation towards some objectives obviously doesn’t let the medium be the one that suggest paths and solutions in every moment Near digital, sometime combined with it, I use, when necessary, other instruments and materials. Fabric, wax, resin, varnish, pigments. I’m working at some assemblies realized with metallic and thermoformed plastic materials. Moving from monitors sometime is said to be healthy.

Bertram Niessen: I think that you’re objective is to create micro worlds, floating in space and time, from which born choices oriented to renounce to chronological narration. Have you ever thought about a project with a closer narration? Why?

Lorenzo Oggiano: The observation is correct. In “Quasi-Objects” videos  called appositely “kinematics”  narration tend to zero through different strategies: redundancy, fragmentation, dilation and circularity. Chronology interests me al place of transformation, but also disturb me as linear vector. The reasons are related to the specifics of the project, and precisely to the exigency to say something about the elementary dynamics of co-evolution of the species (among them and nature as well) more than the history of the single occurrences, the principle to organize further the sensible data.

Bertram Niessen: The concept of almost-object comes from Latour work, if I’m not wrong he elaborated it inside The Modern Cult of Fatticci. It’s a kind of difficult theory. How are you linked to this author thought?

Lorenzo Oggiano: It is an important intellectual debt in relation to his work and those of many other thinkers, scientists, artists. Changing himself the concepts created by Michael Serres, Bruno Latour, in “We’re never been modern”, reflects on “work of depuration” that allowed during modernity the production of two distinct ontological areas, human and “non human”, constitutionally and strategically denying to each personal knowledge the possibility to think about mix, about processes of mediation/translation, about realities of socio-technical nets. A modernity destroyed by the weight of an uncontrolled proliferation of hybrids that, not finding a place near objects or subjects, made unsustainable that separation between nature and artificial on that a thought, an anthropocentric asymmetric cosmology was built.

In “Quasi-Obects” I collected ad interpreted following my sensitivity the invite of Latour to think the unthinkable of moderns, in the ambit of an “Emended constitution where nets turn legal, where the Middle Empire, the almost-objects are represented”.

In precedent works, and recently in the photographic series “Sample-Kit”, realized between 2002 and 2003, I already got involved to the possibility of “sight record” the inte(g)raction and the semantic movements in the ambit of a relation subject-object. “Quasi-Objects” is the sequel of this path.

Bertram Niessen: Do you want to talk about the projects you’re realizing?

Lorenzo Oggiano: I’m working at the cinematic week of “Quasi-Objects” of which a preview will be proposed at the Traffic Gallery in Bergamo at the end of January with some big sized pictures of the same set. In random order (and variable priority) more than projects I already talked, new graphic studios, a new video installation of three channels and the reprise of materials from “Multiple Trace Memories”, a work about the past, the memory, the personal identity realized in 2004 using old family films recorded in 8mm.