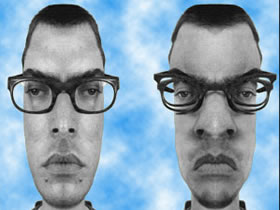 If Shakespeare considered the world a theatre, Florian Thalhofer believes the world is a hyperlink system. That is how he represents it, film after film, shooting landscapes, stories and revelations which are “assembled” with his original software, the Korsakow System .

The result is a non-linear and interactive film, where the audience can decide the plot by selecting a series of links which are generated by a key word. The system was created in 2000 to make the film [korsakow syndrom] , dedicated to a degenerative pathology of the brain of alcohol addicts which destroys their short term memory and make them unable to find space-time directions. The stories are fragmented and not necessarily coherent and are the basic model for Florian’s not linear narrative.

Starting from a clip, the programme isolates other so called SNU, smallest narrative units, among which the audience can choose, thus obtaining a different plot and so a different film each time. The classic screenplay is divided and the story, or rather the stories, are the result of a common contribution of both the author and the audience, a narrative stream which moves through the Net. And it is actually the Internet which is not only a non-linear communication model, but also the main distribution platform, where its evolution takes place. An evolution which, according to Florian, starts from a way of thinking that is innate in our brain.

We met Florian Thalhofer in New York before he started touring the USA for his latest project, [1000Stories], which was developed on vlog and installation at the same time. There he told us about his point of view.

Monica Ponzini: How did you conceive the Korsakow System?You define it “a simple hyperlink system”, but it’s really a new way of creating and watching images.

Florian Thalhofer: It was a bit of an accident. I was attending the University in Berlin , studying design, but I didn’t like it so much, so whenever we had something to do, I made a story out of it. I didn’t know anything about filmmaking and storytelling, I used the computer and it’s been very natural for me to develop something like the Korsakow System, that’s very logical. The first thing I made was an hyperlink story called “Small World”: I liked it, but there was a problem with it, because it wasn’t very flexible, you couldn’t change things. I forgot a very important story and I wanted to add it, but because of the way “Small World” was structured (each story was linked to the next one), I had to change all the links. I thought that for the next project I had to work in a more clever way. So, when I started working on the video of the “Korsakow Syndrome” I started here in New York , actually- I started shooting and developing the software at the same time. I created a system based on keywords, where it was easy to have bits and pieces and if you took one out, it didn’t collapse. I didn’t know anything about database and keywords, for me it was just something very logical. I think that if you spend a couple of years working on computer-based stories, you just follow some natural steps.

Everyone thinks following a Korsakow-like “scheme”, then we force our thoughts into linear thoughts and at a certain point we believe that linear thoughts are the real thoughts. They’re helpful, but I think there’s a difference between what we call “thinking” and what we call “feeling”, we feel and we think, but where is the difference? In both cases there’s some activity in your brain, but I think that when you have a thought you can put it into a linear shape, when you have a feeling you can’t. But with feelings you can still solve problems, there’s something complex going on in your brain, but you don’t know how to express it.

Monica Ponzini: Working with this method makes your filming different than a “normal” filmmaker?

Florian Thalhofer: When I started, I didn’t know anything about filmmaking, about linear storytelling. To me it’s hard to make a comparison, I never really directed a linear film. When I talk to filmmakers, I can see that they think very differently, the practice that you do when your work on something, forms the way you think, the way you see the world, and I think that Korsakow changed the way I see the world. And it’s not just Korsakow, there are other things: Internet, for example, changed the way a lot of people see relations among things  not a linear, and the computer.

Monica Ponzini: Internet has changed the way we get information, we experience artworks. How is going to develop?

Florian Thalhofer: There will be a new way of watching movies, read books, etc. I received an invitation for a “YouTube evening”, where people keep selecting the links that come up and project the videos connected to these links: it’s like a Korsakow experience. I’m sure that YouTube wasn’t aware that it was inventing a new way of storytelling, they just used keywords to structure a massive amount of information. What happens is that small “Korsakow projects” grow inside YouTube, and it would be fantastic if they gave filmmakers the chance to use this system Korsakow is a small YouTube in itself, only for a single author, or two.

Monica Ponzini: You talked about YouTube, dealing with a massive amount of information. In general, we’re overwhelmed with information that has to be processed through databases. Database based communication will become essential, just like we do now with the Internet, or will coexist with other forms?

Florian Thalhofer: People will always watch “classic” films, and this distribution system will go on for the next 50 years, but people will watch things online as well. I make documentaries and Koerakow is the perfect tool, I can’t think of anything better than Korsakow to “see” things, to connect them and frame them, understand them. A linear version of them would be a lie. So, there will be this new kind of storytelling that will use the Internet, and the database is like an engine that drives the car: people aren’t maybe ware that things are database based but there will be a lot of “cars”!

Monica Ponzini: Since there such a high level of interactivity, how do you think your audience experiences and “contributes” to your movies?

Florian Thalhofer: When I make my movies, at the beginning I don’t really think so much about the audience, I just want to learn something about the world. It’s very luxurious to be able to make these kind of projects: I like to be in a shopping mall for a month and think about the world! When I’m done, it’s very interesting for me to see how people connect the characters, and I use the strategies they use for the next project. I also believe that the audience is much clever than I am, since they are so many and I’m only one. And I have the feeling that TV underestimate its audience, but I think that the people out there are much more intelligent than the authors. It would be very rude of me to tell them how to read my work. Internet gives me the possibility to reach a lot of people: my projects are pretty small, but with the Internet I can produce very cheap and still be “out there”. I don’t watch television any more, Internet is my source of information and I communicate online. I have a lot of ideas on how to further develop Korsakow, I would like tostructure the program according to people’s feedback, but I can’t do it yet.

Monica Ponzini: Talking about the Internet, a lot of young video artists use the web as their main  if not sole- distribution platform. What do you think about it?

Florian Thalhofer: I met a filmmaker who made three documentaries. The first two were distributed only on the Internet and the third was shown on TV. He mentioned to me only the first two and then after a while he said “ok, then there’s this third one”. It was the most successful, but a lot of people told him what to do and how to change it in order to show it on TV and it wasn’t his film any more. About the Internet, I like the fact that my projects are so small and I have so much control over them, I can experiment and if things go wrong it doesn’t matter, you can improve and experience more freedom. Maybe that will change in a couple of years, but at the moment it’s great.

Monica Ponzini: Can you talk about your latest project [1000Stories]? It’s a vlog, but it’s also transferred on the Korsakow System: how did you develop it?

Florian Thalhofer: This project is the biggest project so far, with a budget of 12,000 Euros for two people. At the moment, there’s a problem with Korsakow: it’s made with Direct, so it runs on 70% of computers. For this project, I’ll travel within the States and another artist, Mark Simon will travel within Germany . Our videos will be uploaded on a website and then transferred to a Korsakow-based installation, so there will be a Korsakow project growing while we will be on the road. I would like to have it online as well, but I couldn’t manage to do it, maybe next time.

Monica Ponzini: Why did you decided to come to the United States ?

Florian Thalhofer: I was here two years ago, and I’ve been interested in the States for a long time: they’re the most influential culture in the world, wherever you go, you can communicate with other people basing on American culture and I think that’s a good thing. But why is American culture so important? In a way, I feel that I grew up experiencing the American culture myself, but I can’t understand this country. I’ve been to New York and Los Angeles , and there are people who are very similar to Europeans, but they all say ” New York is not America “. Where is the real America then? It’s out there, somewhere, but nobody goes there. Some came from there and they say it’ s terrible, but I don’t believe that it’s terrible, I want to see it, check it out! So, here I am.