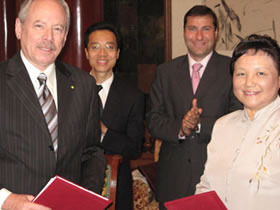 The American Association for the Advancement of Science (AAAS), the China Association for Science and Technology (Cast) and the Chinese Academy of Sciences (CAS) were the protagonist of Beijing meeting of 24 th -29 th September. It deserves an in-depth examination of its contiguous and symbolic meaning. It is impossible to disregard this kind of initiatives to understand how the future developing and technology geopolitical relationship will evolve.

During the conference, some deals of collaboration in the formation and publication area have been signed (most of all about the Science magazine), looking for a higher universal commitment for the ethic and sustainable development and for the spreading of the scientific knowledge from the public opinion.

Sense – and pride  were part of this meeting, when the president of the CAS Lu Yongxiang affirmed “Throughout the visit to Beijing , Shanghai , and Hangzhou from 24-29 September, officials from AAAS and their Chinese counterparts suggested they were laying a foundation for the future”. To have an idea of the communicative impact of the associations we’re talking about, if we have the principal American scientific association (AAAS) and the prestigious magazine Science, on the other side we can only consider that the CAST network (founded in 1958) unites 900 magazines, while CAS (founded in 1949) count 108 research institutes and 200 scientific organizations.

The president Lu Yongxiang and Alan Leshner, leader of the directive committee of the AAAS, individuated some areas of possible future collaboration, such as the exchange of study programs and scientists between China and United States in the areas of nuclear energy, atmospheric and neurological sciences.

There’s no need to underline the actual and historical importance of China in the developing and technology, that is represented by Beijing and Shanghais as economic and innovation centers. Moreover, it is not necessary to be developing politics expert to understand how the majority of the environment politics depend by the laws the Asiatic giant will impose to its population. This is the reason why Wan Gang, Chinese science and technology minister, wanted to remark the value of China integration in the worldwide organization of S&T (Science and Technology) and the moral and deontological integrity that the scientific behavior ought to keep to the developing of every nation.

The meeting is an important stage in the processes of interdependence between the researches and developing politics and all the problems of knowledge, ethic and social responsibility related to the scientific discoveries. The ethic, intellectual honesty and scientific communication have been three of the themes that provoked more questions, when not discussions. During the interventions some Chinese scientists asked more ethic-scientific control to their colleagues. Famous cases of technologically advanced Chinese chip turned into re-invention of chip produced in the US . Qian Yi, environment science teacher at the Tsinghua University , charged several cases of manipulation of curricula, paper and even manumission of scientific results officially published (most of all through photography).

Standard procedures against plagiarism, manipulation and result falsification are considered necessary. It is a problem related to the scientific community that can be solved at macro and micro social level, inserted in a communicative contest enlarged to the society, where communication is “not only to the public, but even with the public” (Alan Leshner), that means where it is possible to communicate and listen to exigencies of the communitarian groups, most of all the marginal and poor ones, that mostly need to develop.

Jeffrey W. Legro sustained a more complex discourse in the article “What China Will Want: The Future Intentions of Rising Power (Perspectives on Politics, 9/07). Legro affirms that there’s no need to think about China only in terms of strength and aid of its interdependency to create a form odemocratic grow and integration. The occident  with its principal characters US and EU  must pushes over this politic, understand the reasons of the closedown, because the actual developing of China , foreseeing a growing interaction with the occidental system, could take new directions and, at that point, it would be too late to create alternative scientific governance politics.