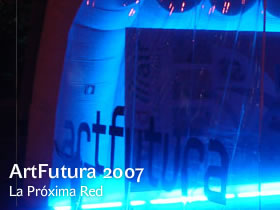 From 25 th to 28 th October 2007 Barcelona witnessed the 18 th edition of Festival ArtFutura, hosted as tradition in the stand of del Mercat de les Flores . The subject for this edition was “The Next Net“: experts and celebrities of the field tried to foresee the next developments of the web.

Although extremely interesting and well explained during the conferences of the 1 st afternoon, actually the theme was then put aside to make room for spectacle effects, 3Ds and videogames. Everything was as usual conducted by experts able to offer communicative and exciting exhibitions. Moreover everything was accompanied by highly useful information for the one who wants to live consciously the technical developments more and more slipping into everyday life. Yet it is to say that the title was a bit misleading for a festival more concerned in cinema and 3D standard applications rather than in a real experimentation.

On the occasion of the Festival, Marcel·lí Antunez showed for the first time his new performance, Hipermembrana, the next step of his project Membrana, where on the stage there are actors, sensors, interactive videos, dreskeletons and shouting machine. Reminding more a Boccaccio’s work than a Dante’s one, two famous Italian writers straddling the 13th and 14th century, the performance leads the public in a hellish trip following a minotaur’ s orgy adventures. As usual the whole structure is interesting and well organised, allowing video projections and sounds to interact with the actors and Mr. Marcel·lí’s wonderful draws to play a role in the plot. During the festival program Audiovisuale Mr. Marcel·lí Antunez was dedicated the showing of El Dibuixant, a documentary film exploring his life and works and told by the same actor while depicting a composition on a wall.

Among the projects you could see there were a selection of Intros and Demos (the majority of them extracted by videogames) and 3D animation works, all of them of high quality, but none actually innovative or experimental. The conferences were distributed in the 3 days of Friday, Saturday and Sunday and organised for subject: The Next Net, Visual Effects and Videogames. As already disclosed before, the most fascinating day was Friday, starting with a conference hold by many authors.

Juan Freire opened the “ball”. He’s professor for Marine Biology at the A Coruña university and very active curator for a remarkable blog ( nomada.blogs.com , in Spanish) where he explores the net developments on a political, cultural and economical point of view.

Then it was the turn of Hugo Zaragoza, scientific researcher by Yahoo! Research in Barcelona, where scientists look for algorithms able to explain the web in order to booster more complex researches. They look for a solution for classical problems in linguistics and semantics; they study the surfers behaviours, the web applications, data organization and classification. The final attempt is to find out the basis for the next net which will help people organizing contents, understand their needs and easy connect them to information. This is what the net should be able to offer through proper services.

Another interesting and pleasant speech was Enrique Dans‘ one, professor at the university of Madrid and collaborator for many communication media. His analysis is focussed on what kind of people use internet, on the way and what they look for, on the difference in perceptions of the growing generations who have grown up with these tools, on the phenomena changing ads and economy.

After Artur Serra of I2CA and his intervention about Overmundo in Brazil, we can probably come to the conclusion that Web 3.0 is already operating but it is not available for the majority of the people, it is still in an experimental step and its objective will be organizing in a more useful and rational way user participation, beyond being more participative and representing a channel for other media. This will clear the way for who has to find and select information and services on the net.

The next host is Steven Johnson, renowned author of essays such as Everything Bad Is Good for You or Emergence: The Connected Lives of Ants, Brains, Cities, and Software . His interesting point of view take the cue from the theory of vanishing-point. According to this theory our interest for a fact is inversely proportional to its geographic or emotional distance. As a consequence, although the pro of the web is that you can surf from anywhere in the world, the web must also offer instruments for contextualising the contents and the opportunity to look for information directly tied to one’s own area, or even the neighbourhood.

On Friday the conferences ended with Dan Huebner of Second Life telling us the story of the birth and the development of this social stage and he described what was happening there, what people are looking for: it would have been a more interesting analysis if only more deepened on the psychological and sociological point of view.

On the second day it took place the traditional exhibition of Vida, an international competition for Fundación Telefónica‘s life and artificial art, already at its 9 th edition. In the NextFun stand, opposite the theatre, you could preview the winning movies of the last edition.

Then it was the turn of three celebrities of the artistic world. The first speaker was Paul Verschure analysing the performance Re(PER)curso , acted the previous evening by a dancer, a percussionist and a synthetic character in a 3D virtual world. Despite the long technical organization of the performance, the lacks in aesthetics and style let you think of a school exercise rather than a mature work.

Jaume Pensa‘s works are definitively breathtaking . He is a Mediterranean genius always joining high tech to sensuality and beauty. One of his most e xtraordinary creations is Crown Fountain , a huge fountain realized in Chicago and made of blocks of glass and a thousand faces shot during two years. Jets of water come from the open mouths of these faces, recalling mythological subjects. A suggestive work, perfectly fitting with the city environment and based on a solid and well developed idea. The artist spoke about the difficulties during the realization of the work and the reactions of the citizens, what he regards as a basic issue.

The audience feedback is essential also to Álvaro Cassinelli, a young Uruguayan physician and engineer now working as lecturer by the university in Tokio. He illustrated his Khronos Projector on show in the stand NextFun. It deals with an other beautiful work consisting of a cube where there is a flexible screen made of lycra projecting a picture from the end to the beginning. This image is actually a video clip and you can manipulate its time of show just touching the screen or directing a light at it. So pining candles can be again entire and enlightened, rotten watermelon can come back to be fresh and juicy, traffic jam flowing smoothly, a sunset can be again a dawn, everything happening just with a stroke. Therefore the work offer a touch-interface that allows you to manipulate the space-time variable at will.

The objectives of this work are: interactive cubism (i.e. the idea of painting playing with time), non linear narration, a 2D & ½ screen (that is to say offering new projection spaces, putting into question the idea that digital interfaces are fragible and therefore you mustn’t touch them  what on the contrary public are always willing to do-). In Mr. Alvaro’s mind this exploration through gestures has still to undergo further developments in sound, dance etc. The possible applications outside art are several: just think of medicine, architecture, geology, advertisement.

The afternoon was occupied by digital animation and visual effects of 4D cinema: Jordi Gironès who works by Framestore CFC (UK), explained some themes regarding the oncoming movie ‘ The Golden Compass’ ; Ben Hibon described his animation work paying particular attention to the short ‘ The Codehunters ‘, realised for MTV Asia and taking part to the 3D competition ArtFutura Show and at last, in a meeting lasted 2 hours, Debbie Denise, Buzz Hays and SeanPhilips working for Sony Pictures Imageworks spoke about the history of 3D, showing some extracts from Spiderman III, The Polar Express and Open Season . They also premièred some shots of the latest Beowulf, giving the public polarized 3D glasses. Sunday was spent for videogames: Little big planet, Heavenly Sword …

Hosts and events in the festival, as usual a rich event, were perfectly organised and of course they were much more than I mentioned. For further information I suggest to visit the Festival website, where you can find a lot of clues, a blog and a long list of links.