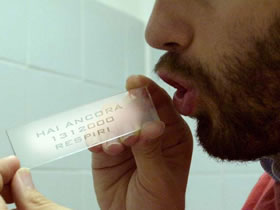 From October 1 st to the 21 st 2007, Palazzo Frizzoni in Bergamo present NAN°ART inside Bergamo Scienza, managed by Stefano Raimondi , with works of Alessandro Scali, Robin Goode and Grit Ruhland .

The exposition represents the first occasion to reflect on the usage of nanotechnology inside the Italian art, and the duo Scali-Goode surely represent one of the first Italian cases, if not the only one, where nanoart finds its own and personal space to evolve and show. As Raimondi underlines, the proposition of this type of works means make a “fidelity pact” between public and artist. Works are exposed in a little hall where the space is minimal and they are visible only through microscopes. The visitor must approach them with curiosity and desire to discover a new world, searching what’s beyond.

There’s no doubt, all the merits are of the manager and the scientific commission that support this initiative, that testimonys the interest for new researches, the opening to artistic practices that constantly dialogue with different and stimulating ambits, such as the science and technology one. To understand the path of NAN °ART , I had a little chat with the Italian artists whose works are the nucleus of the exposition, born in collaboration with the scientists of the Turin Politecnico.

Scali-Goode: We met in Turin in 2002, as we were working for the same publicity agency  the Bgs D’arcy, now Leo Burnett. As the agency didn’t let our creativity flow, we started working at the project of an art-creativity-design magazine, called Paperkut.

Silvia Scaravaggi: How did your collaboration with the Turin Polytechnic start?

Scali-Goode: The collaboration with Politecnico has been a sort of natural evolution of the Nanoart project. Turin is one of the most excellent centers for nanotechnology in the entire world, so it’s been pretty logical to go there and tell our ideas. We had the fortune to know Prof. Rossi and Prof. Pirri, which turn a crazy idea into a concrete reality. Nowadays our Nanoart is possible thanks to the passion and enthusiasm not only of the Prof. Pirri, but also of a group of 7 students that using the resources of the Polytechnic transform our concepts in real works.

Silvia Scaravaggi: How did you get to nanoart?

Scali-Goode: Pure and simple curiosity. We started reading and interesting to nanotechnology almost 4years ago. We suddenly had the craziest idea ever to realize nanometer art works, and the past years have been spent trying to give concreteness to this dream. After contacting and going to the Physics Department of Trieste  and most of all after the meeting with Prof. Enzo di Fabrizio  we understood that maybe we really had the opportunity to realize art works using nanotechnology.

Silvia Scaravaggi: What type of relation have you built through the interaction between art, science and design?

Scali-Goode: A concrete relation of collaboration between two worlds that often, erroneously, are considered as antipodes. It is important to underline how our relation is not a warning or distant one. It is a constructing rapport that includes both the creative and realization phase.

Silvia Scaravaggi: How will the Bergamo exhibition be for you, what will it mean?

Scali-Goode: The show will surely have a particular meaning. We could say it’s our first personal (excluding the Grit Ruhland’s work), and at the same time it’s the first time we expose 6 nanoart works all together. Moreover, the exhibition is the concrete and evident manifestation of the collaboration between the artistic and scientific world.

Silvia Scaravaggi: Which works will be exposed?

Scali-Goode: We’ll expose Oltre le colonne d’Ercole (“over the Hercules columns”, a micrometric walk on a siliceous area), Actual Size (an African continent by the micrometric dimensions), Libertà condizionata (“on probation”, a micro statue of liberty), Scemo chi legge (“stupid who’s reading”, the same phrase has been written on a siliceous wafer with the laser), Fiato sprecato (“wasted breath”, an interactive works that indicates the average number of breaths a human being can make during its life), Chiave per il paradiso (“key for the paradise”, a camel in a needle).

Silvia Scaravaggi: Which are your favorite arguments?

Scali-Goode: There’s many of them and each one is deeply different from the other. Actually, more than the arguments, we care about how we transmit the message. We’d like to do it in a simple, intuitional manner, with no complex subtitles or critical apparatus that explain reasons and references, obviously without renouncing to deepen the concepts themselves.

Silvia Scaravaggi: How does your project interact with the exposition care?

Scali-Goode: Nanoart introduces some questions to the way works are exposed. Works are invisible to a naked-eye, so the problem is how to visualize them. As of now, we used several exposal criteria. In Bergamo , for example, works will be exposed under microscopes lenses. At MIAAO images will be visualized on a computer screen.

Silvia Scaravaggi: Which one is the added value of the exposition confronted with a single work? (I’m thinking about “Oltre le colonne d’Ercole” that won the third price of the Premio Arti visive San Fedele of Milan in 2006)

Scali-Goode: The works exposed together can express the overall meaning of our art, of our contents and arguments and the way we do that.

Silvia Scaravaggi: Do you think this kind of art will have a market? Are you interested in it?

Scali-Goode: It is possible our participation to some international trade fair to test the market reaction to our works. Actually, selling is not our first goal, as we survive with our job at the communication agency founded more than three years ago.

Silvia Scaravaggi: Which role do literature and philosophical and anthropological speculation hold in your work?

Scali-Goode: An essential role. The fact we are a couple allowed the interaction on a background oriented to creativity, art, illustration and design as well as on a humanistic background with literature, philosophy, anthropology, semiotic and theology. We recently also added scientific reflections about physics, quantum mechanic and its philosophical implications.

Silvia Scaravaggi: What type of communication would you like between your works and your public?

Scali-Goode: We’d like a simple and immediate relation, touching and involving, but even intellectual and cultural. We’d like our works to be interpreted from different levels, depending on the spectator knowledge, without complex explanation or critics.

Silvia Scaravaggi: Which is nanotechnology role in your research?

Scali-Goode: From our point of view, nanotechnology is nothing but a medium  evidently totally innovative  that allows the expression of precise arguments or concepts in a way we find the most appropriate.