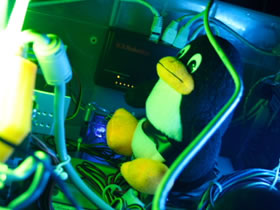 Right this weekend it took place the 10th edition of Hackmeeting. This is a very important appointment for the Italian digital community because of its love for free software, of its computer nerds, of its technology freaks, regardless of hardware, software or reality manipulation. Hackmeeting is an independent initiative dating back to 1998. Every year a different Italian city is chosen as seat of the event, hosted by free and public spaces. For this edition the seat was the social centre ‘Rebeldia’ in Pisa, Tuscany.

First of all this event is a 3 days workshops and presentations enriching a hi-tech talk, deeply rooted in this culture of free software and free licences. There are plenty of hi-tech meetings, as well as software and IT economy summits, but this is a special appointment: it is the only manifestation handling these topics in a critical and radical way. Hackmeeting firstly refers to the hacker approach to technology. Although the word hacker has contrasting interpretation and connected to any kind of definition, surely has a proactive attitude not subduing the technological impact, but trying to give a direction.

Hackmeeting, o hackit, according to the participants, starts from this point, talking of “techno-indifference” in its home page. This represents the first critic to move to the social context showing to be a passive consumer of technology.

Hackmeeting‘s goal has been during the years the update of this critic and talk: in 1998 at the birth of hackit, the free software was still a confined phenomenon and internet was still spreading as an instrument of communication and information spread. Nowadays millions of people use the web to write, file share, plan, build everyday, creating a unsustainable production of contents. Laws for IT privacy and censorship interventions are more and more frequent in the political news. All around the world you hear about defence and security but no one wonders what actually can be done on this subject. These issues touch everybody. But the most of us live them with indifference, without really understanding what is happening, without asking too much, just accepting the developments in technology, its improvements and changes, and just wanting it to be useful and easy to access and be used.

Instead in Hackmeeting you can hear the voices of those who have questions, doubts and critics, for sure technical skills and high degrees of passion and curiosity. Hackmeeting ‘develops and crosses the resistance groups widespread throughout the Italian and European territory’, say the organizers in the page home. They are trying to divulgate information on topics not very much developed but very important for everyday life. Their attempt is focussed on a never defined program of meetings tooking place continuously on Fridays and Saturdays. But how are these summits organized and who are the organizers of this event?

Actually Hackmeeting is so special because of its organizers. Everything was born in a mailing list, created in the 90s to be an instrument of public discussion and indifferent to local nods, situations, linux user groups and movements bound to free software. Hundreds of people with two common features: the intense exchange of emails and their dream for an event able to give shape to all digital underground souls. Of course respecting the value of the independent managing and production. On the whole: a public and concrete event open to all connections to the outside and all the cities. The list has been for years the organizing core of the event. Lot of people took part to it and collaborate to the managing of the logistic aspects. The rest is done by participation: spaces are transformed in order to let the lan space , the active heart of hackit. Lan space is a space with electrical and web sockets able to host the great number of people “walking through it” during the 3 days of the event.

Every year this space is different: once the lan space is a huge room composed by 4 hundred people sat at the tables and every kind of cable crossing over their heads. Some other times it is made of smaller rooms where cables go through walls. Also the summit spaces must be prepared: you need cloths, projectors, web and seats. In the mailing list you find what you have to carry on with you, what someone can do and who s/he is, who can come before to clean the rooms and create the web the web construction is a very interesting point of Hackit: not all the places hosting hackit dispose of internet, so you have to find it and make it accessible to hundreds of people. It is constructed, each time, in every single piece: the servers, the dns, the gateway, the web configuration, the shaping band in order to take advantage of the internal resources and not abuse of downloading.

The access is very simple: you get there, come in with a free subscription and you come across straight away with a pc (with the related “hacker” at the keyboard) assigning you an address to surf on the web. Potentially all lan space disks let share contents, what makes the exchange activity frantic and amusing, an activity in progress during the whole event. Hackmeeting lives for 3 days non-stop, and there you always find someone awake and someone sleepy at the pc. You sleep hosted by the space, in sleeping bags and with basic utilities, yet it is a very amazing experience being worth of sacrifices. Everyone can take part just subscribing the list, proposing meetings or simply having a look. Sunday, the final day, is dedicated to a plenary assembly where, apart from exchanging positive comments on the good result always occurred-, the main subjects are the community itself, the proposal of the event for the following year and moment for general evaluations on the technological debate. You come back home thinking of the next Hackmeeting and keeping on the resistance against the daily technological conflict.

Actually the event atmosphere is something unique, a fluid moment of creative cooperation. Thousands of self-managing people showing a certain complexity, and by the way, also beauty: computer with DIY wood case, pc in luggage, in aquaria, antenna resulted from tomato juice tins. And then electrical components are recycled in order to create musicthese are just some examples of the eccentricity inside Hackmeeting. This year the main topics were software licenses and systems for remaining anonymous, prime numbers, phone webs security, but also science and nutrition.

The considerable and creative presence of computers represents the aesthetical and folk aspect more characteristic of Hackmeeting, and not because of the pc but because of the non organization in their disposition and so the derived tangle of cables and devices. Hackmeeting is not an IT event, but rather an open appointment welcoming every radical approach to any technological system. And so don’t be surprised if you see people with soldering iron, Allen screws, electronic components, every sort of recycled hardware, old cans and wires and why not, also rolling-pins and porcelain pots. The summits are ‘free and open to public, and they will deal with technology but also politics. We will support the talk about digital rights, about the choice of free software, the opposition against the politics of patents and traditional copyright, the construction of self-managed servers, the research and experimentation of clean energy resources, the consequences of the social use of technologies and the relation between technologies and sexuality. And then issues are also the problems referring to work in the IT field, the self-defence of the own privacy, the study of control devices and the resistance against censorship’.

Hacktivism, a term that you can find in Hackmeeting manifesto, but also just taking part to the event, is an attitude: changing, manipulating, using technologies in answer to one’s wills. ‘Our “hacker” soul is shown in everyday life also when we don’t use computers. It’s shown when we fight to change things we don’t like, as false and imposed information, as the use of not accessible and expensive technologies, as getting information in a passive way with no opportunity to interact and having to take the introduction of repressive and censorious technologies just lying down. Honestly, we are afraid of how quickly technology is irreversible bound to the social control, to wars, to a morbid fear of our “brothers”: our approach is diametrically the opposite.’

In this context this year some seminars specialised in code could find place. Not only. There were also discussion on advanced security systems, electronic workshop as well as more general interventions on the social aspect of technologies and also the updating on the subject of privacy. Of course there were international known hosts, a critical seminar towards science, its freedom and authority. This latter meeting gave birth to a debate on the activism future. And, with pots and rolling-pin in hands, you could take part to a bread workshop, offering with its ingredients and the tight relationship between the ground and traditional culture a good and delicious- excuse to think of copyright on seeds, privatised waters, lost know-how and re-appropriation of the production time as hacking way of life in the consumption life.

The lan space in ‘Rebeldia’ was hosted in the concert hall. Projection screen with a collective vj: if connected to a certain computer it was possible to project whatever you wanted on one of the 8 video terminals simultaneously transmitted by the projector. You could saw publicly lines of written codes, self-video productions, movies, vjing sessionsIt was a flux non-stop of images particularly appreciate on Saturday evening, ending with frantic electronic dances and every kind of screening. Hackmeeting is also an amusing event and poetical in its techno-fetishist and libertarian soul. Among the electronic note the romantic note could not miss: at the loudest volume hackers sang the song of capitan Harlock, hero for fictional pirate and freedom of transformation.

It was a perfect background for the celebration of this tenth appointment that is very topical for some important social-technical issues. Control and restrictive interventions towards digital freedom are the main topic of the reflection. More precisely: the more and more sophisticated profiling made possible by the huge amount of pieces of information that we put on the web at everyone’s disposal; video and bio-metrical systems for control of people and then the bond to purchase owner software systems and their fights against piracy; the issue of security and privacy not only regarding emails and texts but also multimedia contents and phone services employing the digital web.

Technological innovation shows us sophisticated systems not allowing the final user to deeply understand them. The data retention records our lives gathering information by phones, credit cards, supermarket cards, bank cards, telepass systems, blockbuster cards, your providerLast weekend in Germany twenty thousand people protested against the politics of control on behaviours in the telecommunication world, a politics considered a disadvantage for all citizens ( http://www.vorratsdatenspeicherung.de/content/view/142/1/ ).

Against the political attitude retaining freedom exchangeable with technological innovation and calling “security” the cold artificial world where what we actually loose with technology is the human existence. Techno-control is what people have in mind when they speak of free technologies and of how really technology is made of. But there’s a more remote and significant perspective for hackit: the fight for public and exchangeable knowledge, of any kind, above all if creative, unusual and anti-conformist as the ones seen during the 3 days event. Security is knowledge, not control. It’s trust and not isolation. These are the foundations of the Hackmeeting community and an invitation to go closer to their public ideas.