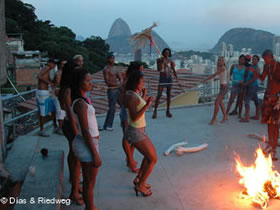 Dias and Riedweg‘s works (Brazilian and Switzerland artists) are an “experience”. They absorb spectators inside lives of people they’ve worked with. It’s a political and sensorial work. They make people feel emotions. They make people participate.

And this is their strong point. This way, their works put together different social realities, of those who lives unsafe situations at the margins of the society, and of those who are perfectly integrated with the capitalistic system. They want to make this two worlds communicate, so that one enter the other to create a brake-through in the system. That’s the reason why Dias and Riedweg doesn’t direct only to the artistic public, rather try to penetrate society with their message as much as they can, so that it can have a huge echo and can be perceived by a bigger public.

For example their first work: Devotionalia (1994). It is a project realized inside the Rio de Janeiro favelas, where Brazilians social non-governor organizations and associations have been drawn in. For almost three years their mobile atelier traveled around the streets, collecting the ex vote of children and teens who lived there. The result is all the modeling of hands and foots of more than 600 guys, accompanied by the video where everyone made their vote. When the installation has been exposed, the public was half from the favelas and it was their first time ever with video-art and art in general.

In 2003 the artists took back that work, searching for all the guys they interviewed. Lots of them where dead, so they collected the witnesses of why, how and what happened. They realized an editing alternating those witnesses with the articles written on journals about the same histories. Those who lived the facts on their own skin amplified the coldness of medias. Communication got more and more intense and penetrating.

The artists wanted to act a sort of “intensive communication” even in “Inside and outside the tube” (1998). They collected the stories of some refugees waiting for political asylum, temporarily put in a centre in Adliswil , Switzerland . They had histories of the entire families told, their first impressions about Switzerland , what they felt, their sensations. Next, all those recorded voices have been transmitted in some public places of the city. The installations made the voices coming out from tubes used for heating. The tubes were the installation, the work, but also the media that transmitted the message. They connected two distant worlds, the inhabitants of the city and the refugees, homeless and without rights.

In their last work “Funk Staden”, presented this year at Documenta, they’ve been inspired by Hans Staden’s illustrations, born in Kassel in the 16 th century. Staden, during a trip in Brazil has been captured and was going to be eaten, but was then liberated as he wasn’t enough courageous to be “incorporated”. They didn’t want to ingest his diversity. A perfect metaphor for the artists’ work.

Dias and Riedweg reinterpreted Staden tables, environing the action inside the Rio ‘s favelas. On three screens there were projected the images recorded by three cameras installed on wood poles (a citation of the instrument used by cannibals to kill the designed victim). On a rooftop where people were having a party, the participants passed the cameras from hand to hand while dancing. It was like a rite of the 21 st century where the anthropophagus are the inhabitants of the favelas and technology is cannibalized, becoming an instrument of diffusion of their singing.

Dias and Riedweg works, conjugating the political and emotional aspects, try to destroy the barrier between the opposite societies, that hardly communicate in a sincere manner to each other. They knock down stereotypes and commonplaces, to show vibrating and sensitive matter we’re all composed of.