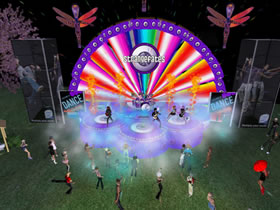 In the afternoon of 29th June 2007 I’m anxiously waiting outside the gates of SecondFest , the huge musical event which will last all the weekend and during which a series of more or less famous artists will perform. A small and colourful crowd has already thronged at the entrance when, with a slight delay as regards the programme timetable, the gates open.

The venue of the festival, where I am going to spend the next three days, is so huge my sight cannot tell how wide it is. I try to orientate myself and, after having long wandered through food and drink stalls, raver clothes stands, chemical toilets and camping tents, I finally spot the five different stages where artists are going to perform. While in the air you can hear music resounding from the first gigs people gather around arenas and big dance tents and start dancing and socializing, in more or less tactful ways.

There aren’t many people, which is not surprising since this is the first day and there aren’t many groups performing. We start warming up with Groove Armada’s dj set, and we finish with Toby Tobias . Some irreducible party addicts, among which it’s me, stay after the last performance of the day and dance till dawn on pre-recorded tracklists and entertain one another with juggler tricks made of coloured lights.

After having wandered here and there during the first day now that it’s Saturday I move from one stage to another with confidence: from soul singer Tawiah’s gig to New Young Pony Club’s, from Tiga’s dj set, which makes almost everyone dance, to the performance of the Londoner dj Gilles Peterson , who created Acid Jazz label . Every now and then I recover energies going to one of the conference rooms which are nearly empty and I almost fall asleep on one of the theatre seats during a boring performance. That’s how I spend my second day, while the audience keep on increasing.

On Sunday afternoon I follow the electronic live performance of Dan Berkson and James What , which is rather exciting and so I decide to talk to them. The two English artists are very kind to me: together we remember their performance at Sonar last year and they give me an indefinite number of interesting links to videos and recordings available on the web. We have a long chat, until the awaited performance of the well-known dj David Mancuso , a real icon with no need for introductions, being the founder of New York garage scene at the beginning of the 90. Then I jump on the dancefloor again.

In the meanwhile the audience has increased exponentially and in front of the stage set up for Strangefates’ performance the crowd is so huge I nearly cannot move.

The highest audience peak is for the last performance on Sunday night. Already one hour before the Pet Shop Boys’ exhibition, which closes the SecondFest, People gather in front of the main stage. The dancers paw the backstage ground, the audience vibrates with impatience in front of the arena and at last the British duo shows up. Just after a couple of songs there are so many people crammed I cannot dance, I cannot even leave the crowd, I cannot hardly do anything. And there I stand, stuck, impotently jammed in the mud of the lag, till my computer crashes

All that happened durino the weekend between 29th June and 1st July 2007, in a location that can be reached exclusively by those who belong to Second Life virtual community and that was expressly built for SecondFest.

SecondFest has been the first huge event hosted within this metaverse which was created by the American artist Rosedale and by Linden Lab and is accessible from 2003. The event, supported by the English tabloid The Guardian and by Intel, presented a series of both live and non-live musical performances in which both avatars corresponding to real musicians and artists exclusively known in their digital disguises performed.

Some performances were audio-visual recordings of recent gigs; some other, maybe more interesting, were performed live and broadcasted in real time to Second Life community. Some groups performed in front of a camera exclusively for SecondFest, and transmitted images which were projected on big screens on the stages.

Hosting events such as SecondFest is one of the many possibilities offered by the virtual world of Linden Lab. Experiments on educational, social and commercial fields have been carried out within this 3D environment; and the way it is used has changed with the passing of time, as its residents have changed too.

The most known multinational corporations first were curious and colonized the virtual land, but then withdrew. Second Life did not seem to favour commercial expansion and thus big brands’ interest has soon decreased; maybe also because the number of active residents is decreasing and does not reflect the figures regarding the number of subscriptions, which greatly exceeds that of the actual population.

Only some brands keep on searching different ways of communicating with Second Life’s community. Intel is a case in point and has recently supported different events such as contests among developers, meetings to promote online training, environments for prototyping and conferences for technicians. This is yet an experiment, and we do not know whether the promotion of editorial contents and of art or music events through Linden Lab creation will be successful.

One of the interesting aspects regarding Second Life could be the social dimension of its way of interacting, which, unlike other methods of online information diffusion, offers a real time experience sharing within a community.

Moreover, creating events in Second Life is less expensive and complicated than its real life equivalent and that is why this virtual world could be considered the starting point for artists to share and spread their works of art. It is thus impossible to foresee the future developments of this microcosm: some say it will become a hybrid blending with other applications, some see it as a possibile future browser through which surfing “physically” web sites, some others consider it just a way to chat.

Maybe this phenomenon will simply fade out as a fleeting fashion; despite all Second Life will surely leave an enduring mark thanks to the echo it had in media world but mostly because of the influence the virtual had, in this case, on the real world.