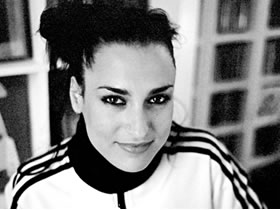 Between the beautiful surprises brought to us by last ElettroWave, I surely flag the young Missil, one of the new international djing promising, guest for the first time during an Italian festival.

We met Missil just a few minutes before the show and we stopped for talking to her, to know how did her career started up. Missil is only 25, but already considered by the international press as the new feminine djing promising and one of the protagonists of the changes that hit the Paris electro scene, becoming once again strong and creative in the international panorama. She said everything started when she was young and realized flyer and covers for her crew parties, with whom she painted the Paris wall. She’s been suddenly fascinated by everything was hip-hop culture.

“With my crew, the BMC, I organized lots of parties. Rumble in the jungle, Bassmassive, Breaker’s Delight. I started realizing flyers for those parties and the covers of the mix tapes, then I realized I needed to express myself even throughout different modalities and a started mixing hip-hop, reggae, ragga etc I then discovered electro music, break beat, drum’n’bass, broken beats, electro, and I learned to range all the genres”.

We asked Missil how breaking through in France is. She explained that her success grew gradually thanks to her crew membership that organized parties not only in Paris , but in the entire nation. We talk about the hip-hop French scene, and she answers that it’s still rich and plenty of valid artist and interesting crew. But the real Paris boom is linked to electro, a phenomenon that allowed the opening of tens clubs during the last years, so that he had the opportunity to play in lots of discos herself.

His artistic path started with the writing and the party graphic, and this is an history similar to many other hip-hop dj’s. The approaching to music inevitably derive from the everyday living in a reality where music itself is the pillar of every activity and its mash-up stile is a clear result.

This world gave Missil an incredible sensitivity in building various and grooved sets, and obviously also a multi-discipline approach to art.

She tells about the spontaneity that she had in approaching the turntables, spontaneity of someone that grew up with that music. This is maybe the additional value of this 25-years-old girl by the bright eyes and the disarming smile, the fact that she hit the point of the mixing lessons about the creation of sets that go from hip-hop to grime, from reggae to breaks to electro. Her sound is so versatile that she entertains all the publics.

Missil played during the last year with artists such as Cold Cut, Laurent Garnier, RZA, Afrika Bambaataa, SuperGrass, Dj Premier, Carl Craig in more than 25 countries through the 5 continents. This dynamicity at every level, more than connotes her sound, gives her the ability to go with talent in her entire production, that includes arworks for her CD’s, website, flyers and clothes.

Missil still draw as writer and during last years realized some interiors of important Moscow , Paris and Turkey clubs. Her puppets will turn into toys and she’s working to create a real fashion line.

Her coloured graphics are feminine but aggressive. We ask how was for a girl to grew up in a boysh environment such as the writing one and then jump into the boysher djing. She answered that respect is hard for everyone, but for a woman even more. But the only moment when she can think about it is when she answers to journalists questions. Writing really taught a strenght discipline.