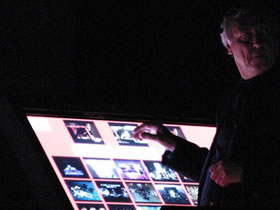 Among the several places where Barcelona offers its cultural proposals there is the Teatre Grec, hosting and giving the name to the famous summer festival. Designed by the architect Ramon Raventós in 1929, the theatre in the open air has the typical structure of the ancient Greek theatres. Moreover you come in passing through a marvellous garden fitted out with design illumination. Thanks to its seat on the Montj uïc hill, while waiting for the beginning of the show you can enjoy here an outstanding view of the city at sunset, perhaps with a glass of Spanish wine Cava or a cool beer in you hand.

On July 2007, the 13 th , this magic place had indeed the responsibility and the pleasure to host one of the most brave and creative cinema directors of the international scene: Peter Greenaway. Well known, loved and hatred because of his movies, ” Drowning by Numbers , “, ” The Belly of an Architect “, ” The Cook, The Thief, His Wife and Her Lover ” , ” The Pillow Book “, since 2003 the film director has been working on a multi-media project, The Tulse Luper Suitcases .

This work in progress is composed by 3 films, very innovative from the visual point of view, a TV movie, several books, 92 DVDs and CD-Roms, collaborative participations on the web etc. The project deals with the life of a writer who collects features of various celebrities: John Cage, Marcel Duchamp, Marshall McLuhan, Italio Calvino, Jorge Luis Borges, Peter Greenaway’s father and many others. The writer’s life, represented through 92 suitcases, several objects and characters (everything is catalogued and numbered) is strictly bound to uranium, whose atomic number is indeed 92.

The story of Tulse Luper is a story of captivity, where everything is stratagem for visual aesthetics, celebration of architecture, colours, details and contrasting shades. Every shot complements each other perfectly, is superimposed, traps the others, has influence on the others. And then the shoots multiple in number and stagger, letters and numbers are no more communication instruments but aesthetical elements, becoming co-stars in this visual dance.

Some short loops of these movies (and others of the artist) are the material for “Tulse Luper VJ Tour“. This is an experiment coherent to the Greenaway’s attempt to show that the underlying theme of a cinema product has not necessarily to be a text. And as it is an already shaped material and because of its strongly experimental soul, Greenaway had no difficulty in volunteering as VJ, a role that he wants to play ironically.

In Barcelona Greenaway officially proclaimed the death of cinema. Afterwards, because of the need for renewal in art, of the obvious social and cultural revolution provoked by omnipresent pc and mobile phones, Mr. Greenaway together with the Catalonian actor Jordi Boixaderas showed 92 quotations about democracy, during the prelude of the show “The Democracy Speech”. Maybe they were too much, but the symbolic number in this case was so pregnant that this exceed was forgiven.

Therefore he exhibited in the new stop of his VJ Tour, even if the project seems to be a real example of live cinema, rather than a graphic and visual backing to a dj music. By the way, in this performance Peter Greenaway was accompanied by the Dutch DJ Radar alias Serge Dodwell, and supported by VJing’s system developed by Beamsystems Holanda.

The device is composed by a huge touch screen (that represented an impossible dream for any vjing in the world because of the relevant cachet, of the poor consideration they usually have in clubs and their nature of computer nerd) where the director chooses video clips drawn by his movies, standing in the midst of the scene like a conductor and supervising them on the three maxi-screens. With any probability the choice for more asymmetry or game with all the screens would have conveyed more dynamism and have resulted in more interesting sound effects.

Yet Greenaway in person said at the overture of his performance that he was not a VJ. The project didn’t consist of projecting imagines as backings for music during a concert or in a disco, but to offer a new way to tell a story, dismantling and reassembling it in a chance and unrepeatable way. This process let the spectator free to interpret and perceive it in a personal way.

In acknowledgment of this concept the sources of sound were the same video clips’ audio tracks. In fact during the performance they were elaborated in real time and set as surrounding and well harmonised backgrounds by DJ Radar. Unfortunately in some passages the musician prevailed, obliging the audience to listen to too manipulating rhythms and sounds. And this provoked stops in the personal process of feeling and perceiving, otherwise encouraged by the images, sounds and abstract story.

On the whole, the performance was very interesting, especially if you consider the process in inverted turn. Its power derives from the same original sources, which are performances, and their live use is just their natural continuation. In brief, the final result is not due to a real time manipulation of images, but to the reconstruction of elements already present in the incredible director’s creations. While trying to contribute to the history of cinema, Mr. Greenaway has already made history.