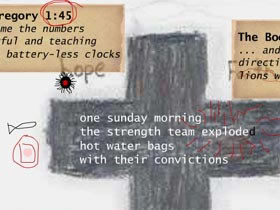 13 odd levels will set you free from cultural systems chains almost definable as dogmatic. The main objective of this play is, in the author’s mind, “to move around and think”.

Game game game and again game is the latest Jason Nelson ‘s work. With an ironical and amused perspective the author looks back at the amateur aesthetics and the mistake theory and creates this work which he defines “retro-game” . Here you find poems and family videos mixed together and found out by the main character during his weird adventure. And here are the character, a strange rolling ful ball, and its goal: the liberation from its own stereotypes – www.secrettechnology.com/gamegame/gamegame.html

Mr. Nelson, as in his self-definition on a past article by Rhizome, is a hypermedia poet, an artist mid way between a poet, a painter and a sound and image manipulator. He is an artist who has been long interpreting the web as a source of virtual and multimedia poetry, as shown by some projects in progress such as Speech/Media, Uncontrollable Semantic or A Tracing. There the user must interact with words so that poetry can be created from a starting point in any order, direction, way and appearance.

We have spoken with Jason Nelson and deepened the main idea and thoughts standing behind his project.

Giulia Simi: In your works there’s always a game side. This feature, beside giving the name to the title of your project, calls back to the typical videogame characteristics, of course with an ironical and in some way subversive approach. What is your relationship with game culture and in which way can art and videogame work together?

Jason Nelson: Many of my works are derived directly from game code. This Is How You Will Die uses the skeleton of an online slot machine to display its interactive narrative. Ending: Chemistry, a largely ignored work, never published, was created around a card game. And there are other works, like The Bomar Gene , that have game code within them, but where it is not a primary aspect. The most common understanding of what a game is doesn’t really apply to much digital work. Nor do I think it should. Most games have specific goals and consequences, competitions and scores. But with my work, I might have consequences in the vein of responses to user actions, but I find the notions of competition and score to be largely societal conceptions, false premises for cultural conquest. However if we extend the notion of game to include play, then all my works contain game elements.

Interesting in this latest project is that from its launch on the web for about 3 months, it has received more that 7 million impressions and I’ve personally got thousands of e-mails requesting me to create more games like this one. The most part of the people writing to me are normally not interested in art nor they usually visit art galleries and museums. Yet they are curious and enjoy so experimental art works. Their comments are often “WTF” or “I don’t know what it is but I definitively like it”. I think this can be a way to test the net-art potentials and to understand how they can reach audience outside the traditional art scene.

Giulia Simi: How have you moved for this project? What did your work consist of?

Jason Nelson: During my initial research, I examined first person shooter game engines, dissecting the open source code and fondling the folders for the images and sounds. And once I’ve identified the purpose of certain images, I create transparent jpegs of the same name or insert animated gifs of landscapes in the place of character movement files. Although my results so far haven’t been very successful, the hope is the game will eventually look nothing like and play nothing like the original or any game. There is no way I can compete with large multi million dollar animation and coding budgets. So why not corrupt the game format entirely. To offer the hint that a user/reader/player is within a game environment, but birth their 3-dimensional experience to not resemble anything in the physical world.

So this is how I started exploring smaller, flash based, designs . After a long research my first result has been Game game game and again game , a kind of digital poem, retro-game, an anti-design statement and a personal exploration of the artist’s changing worldview lens. Much of the western world’s cultural surroundings, belief systems, and design-scapes, create the built illusion of clean lines and definitive choice, cold narrow pathways of five colours, three body sizes and encapsulated philosophy. Within net/new media art the techno-filter extends these straight lines into exacting geometries and smooth bit rates, the personal as WYSIWYG buttons. This game/artwork, while forever attached to these belief/design systems, attempts to re-introduce the hand-drawn, the messy and illogical, the human and personal creation into the digital, via a retro-game style interface.

Through the artwork I tried then to recontextualize some of the main features of videogames. some of the main features of the game. For example, the score, replaced with arrows/characters, continually spins, responsive to game play but numerically meaningless. There are unlimited lives within the game, with the only consequences of encountering enemies being pushed back to the levels starting point, and announcing in a disembodied voice “come on and meet your maker”. Some levels use the “warp” function to transport the creature to certain locations. This warping is taken to absurdity in the levels where the character cycles through falling, and represents the fruitless personal investigation of belief and the always altering lens.

Giulia Simi: In the description of the project you write: “Refuse the tyranny of clear and perfect design and coolness belonging to the majority of web-net art”. So yours is a kind of proposal to return to the analogical design in order to fight the technology’s standardising power. Can you explain this concept?

Jason Nelson: Software such as Adobe Flash or Photoshop largely dominate the appearance and feel of images and artworks. This is partially due to the software’s data processing methods (Flash with vector drawings) and the limited range of tools and filters. The mouse (or data pad) also constrains the artist’s ability to escape the software’s over-powering aesthetic, and thus removing or at least submerging much of the individual from many net artworks. Therefore this game/artwork began on paper, with charcoal and colored pencils, each level born from the immediacy and error/curve/(e)motion of electricity-less drawing. This hand drawn approach breaks the artwork away from both the oppressive control of software and much of design culture.

I think much of new media art is centered on new technologies and polished design. Everything had to work and work well within the systems that new media artists create. But instead of neat and cleanly operating machines masquerading as artworks, I want to see more unclear and complicated, more roughly hewn, and poorly made, more of the non-linear asides and oddly curious. The art world has somehow grown into this industry, one that exists in publishing houses.magazines, dealers/galleries and academic arenas. This industry enforces certain understandings and formats, everything must have a cleanly written artists statement and clearly understood and easily written about artist statement/theory.concept. The joy, the mystery, the, dare I say, magic of creating has waned….replaced by slightly deviations in the technical manual. The expected understandings for the expected outcomes. Code as code for code.

Giulia Simi: Throughout the whole 13 levels you deal with the majority of power systems characterising our society. Your piece of advice is the liberation through poetics. According to you, how can poetry fight against pre-fixed schemes and models which chain us up?

Jason Nelson: Poetry can and should and hopefully will fight against the modes, the fixed models of society. But it wont be the traditional print poetry, It will be poetry that uses the texts of the contemporary world. These texts have changed/altered/morphed/transformed from words into a dynamic and ever growing/deathing range of media languages. Poetics texts are now movements, and interactions, interfaces and games, images and videos. All of these create stanzas and metaphors. Poetry of this nature both defies dissection and categorization, and also seeks to patch and cut away at the systems it builds/births/arrives from. In society we create these modes of understanding, these bank accounts and schedule books to account for and organize our lives. To make us real within our artificial systems. Poetry and specifically digital poetry takes the mind into itself and discards these systems, eliminating the ever-cancerous desire to place life/lives into cabinets and forms. Poetry is the dead weight and wings of a crumbling bureaucracy.