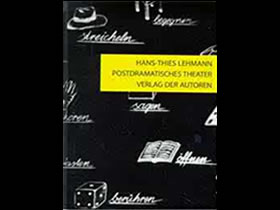 An lightning text is ” Post dramatic Theatre ” by Hans-Thies Lehmann , that faces the changes of the theatre and its fruition in the contemporary theatre, transformations often marked by hybridizations with new media. We must remember that theatre has always been related to the “scene machine”, that never hesitated to exploit the available technology of every époque.

Just think about architecture or acoustics necessary to build a Greek theatre, about the mechanic to create sounds or move the scenes or how did theatre changed from the invention of the electricity, with lights and amps. This is the reason why I dissent smiling when I hear people saying how wrong the introduction of technology inside the theatre is, talking about a sort of pureness I’m ok, but please be at least coherent: no electric current, no buildings (don’t you know architecture uses a high quantity of technology?) and so on.

Technology has always been part of theatre. As in new media, theatre relation with technologic has always marked art and the introduction of contemporary technologies (once it was the video, now it’s digital) moved several equilibrium. Scene machines often turn into an actor, covering an evident part of the scene itself, not as special effect, but as part of the narration.

The role of the author in new media, as in post-dramatic theatre, is getting more and more faded and confused with the user one. In many operations, the concept of text as founding principle of the narration is often called into question and the author creates contexts that other users will use to produce contents (collaborative writing or web artistic projects).

The public builds sometime contents even without a real authorial direction (see myspace or youtube). So an imaginary is generated and a memory shared (both from the technological and cultural side). When once the album was the house of our photographs and memories, now everyone can see your images online in myspace. The logic of the illustration is changing.

The family photograph album has a linear narration, historical. It grows has time goes by and represent a solid reference.

The memory of the new media is coherent with our post-modern perception. Myspace sites are manipulated and up-to-date, build and destroyed. The aim is no more the history of a family, rather the presentation of a character that hopes to be popular, or at least to be. The identity must be searched inside the new media space, in any way.

It’s not the victim cousins fault, when they modify a common photo, it’s not the scholars fault if they film a bully scene and put it on youtube, it is not the attacker fault if they move in front of a camera. Everyone do things like that not for the other, but for the media world.

The identity is being inside the programs, no more huge narrations (war, partisans, thirty-years worker in a factory, being part of the ’68). Contemporary theatre often sees the irruption of the everyday life (or vice versa irrupt in the everyday life, maybe getting out from its location). The everyday that invaded the digital memories of all the sold equipment.

The spread of audio-video technology didn’t bring author films to multiply, but it actually made the everyday, the hyper-real blast. Billions of computers, cameras and video-cameras brought to the explosion of a highly debtor imaginary of the most pop media culture, in aesthetic and language terms. Real-TV, truth survey and TV-series. Anyway, fragmentation passed the denial of the theological linearity.

TV itself keeps its broadcasting profile, but less and less monolithic, less and less big brother. Actually, big brother is the public itself, that can finally influence real moments lived by the protagonists. I asked my barman how would he change DVD and he told me: change histories!

P2P network are a shared memory as well. Emule combines and defines the imaginary of desire and fear (filmic, musical, textual, visual) of its users. It’s a floating imaginary. Some objects will disappear from the memory, some will have a little moment of popularity, some will be available for a long time only for some users, some will suddenly appear from a hard disk disconnected until that real instant. Database memory, not historical memory. Emule is strictly related to new media, as free-access archive and content distributor platform.

The deconstruction of the cinematographic experience, through the DVD player remote control, follows an hyper-real perception of the reality itself. The cross-media product concept exemplify the commercial realization and Spider-man is deconstructed both on the videogame and the movie.

The other paradox is the creation of worlds, crazy, coherent, but also unfathomable and almost incomprehensible microcosm, that demand the Ballard teaching of their own identity through the personal pathology. Unheimlich turns into the unquestionable and media charm of the unsuspicious massacre of the neighbour (Ballard is once again a prophet with his enclave of mansions and homicides).