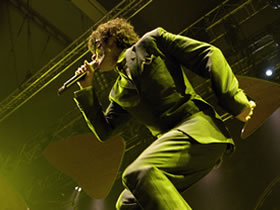 Digicult had the honor of establishing a partnership with the 2007 edition of Sonar, objectively the most widely known and populated advanced music and multimedia arts festival. The project has been carefully executed and many were the difficulties encountered by our small team, but we did it, and we can now proudly present you this double summer issue of the magazine filled with a report that is so complete and exhaustive that it can easily clear any doubts you might have left in your mind about the efefctive possibilities offered by editorial projects on the web, on both their viral capabilities and their structural dinamism.

I moderated myself and only did the fun part of it all, confronting and dialoguing with the artistic directors of the Sonar festival. I could not attend this year’s festival edition, not being able to physically be in Barcelona (but I assure you: i attended several editions in te past) i engaged the discourse, truly happy of approaching it with an open mind that just could not be biased by what i could have seen/heard/felt at the festival, and strong of a lucid mind setup that I intended to use to embrace a chat that i wanted relaxed, reflexive and broadminded. Because one thing is for sure: when you talk about the Sonar festival the issues arising are always the same. It’s been like that, since years. You will find many of these issues and curiosities in my questions to Enric Palau, one of the artistic co-directors of the Sonar.

Marco Mancuso: Do you want to start telling us your impressions about this 2007 Sonar edition? Which was your wishes and goals in the last months and which is your final impression at the end. Which shows and projects are you more satisfied with? Which feedbacks did you have from people and artists.

Enric Palau: Our impressions have been good so far as well as the feedbacks we have received from the visitors and the artists. We have covered new aspects of our artistic search with concerts such as Burning Star Core among others and with the new media exhibitions like Sonarmatica or the Sonar 5.1 programme. We have also offered fun and danceable high quality sounds through the much highlighted performances of Black Devil Disco Club or the Ed Banger crew, with Justice headlining… Finally we have the feeling that the festival has been an “experience”, an important and satisfying fact of life for artists and audience, and this feeling of satisfaction is now leading us to Sonar 2008.

Marco Mancuso: Sonar is probably the only leading event in the world which is on the border between the concept of a cultural festival and a big summer music event. How do you think about this double attitude? In my opinion, Sonar is a cultural event first of all, and I know many curators, art critics and professionists who come every year to Barcelona for Sonar. How is possibile for you to speak and work with so many different souls of electronic and digital music, arts and cultures

Enric Palau: The concept of Sonar itself is based on the balanced mixture between learning and entertainment. We try to highlight the cultural aspects of the festival as well as its more danceable and party features, so the public can actually watch, listen, learn but also interact and have fun. It’s not a dual identity, it’s an eclectic one.

Marco Mancuso: I’m sure many people would like to know, how do you work at Sonar event year by year? In other words, how do you collect money from privates or institutions, when do you start working on the next year edition, how many people you are as inside curators?

Enric Palau: Sonar is an event that needs attention all through the year. We start planning the next one even before the previous one is over, also because it’s the best way to revisit the past editions and improve the possible problems we have encountered. There are 17 people in the office working all year for Sonar but also other activities of the company. The real start is normally after Christmas, but there are lots of negotiations already solved before then.

Marco Mancuso: How is possibile to build such a rich and full program like Sonar? Are you completely in contact with 100% of international music label, promoters, festivals, agencies? Do you travel worldwide for festivals or the Internet is your virtual job tool?

Enric Palau: We receive a lot of proposals by post which we try to listen to, though it’s impossible to listen to all of them. For this purpose we have a curatorial team which brings in its choices and preferred listening. During the year we also travel to several events worldwide as well as to our SonarSound events. So then we have the possibilities to meet local labels and artists from other countries, people involved in electronic culture which are interested in networking with us. Also, label managers and artists that have been to Sonar and are closer acquaintances of the festival suggest upcoming acts, as well as their newest and future proposals. We then have access to a variety of inputs from anywhere and we try to pull them together into a more coherent and “readable” programme which slowly becomes the final Sonar Programme. For SonarMatica we count on the support of one specific curator, specialized in new media.

Marco Mancuso: How do you work with guest curators like in the last years? Are you open to curatorial proposals or do you contact someone asking for a precise project?

Enric Palau: We normally contact someone asking for a precise project and commission the work. Of course it has a lot to do with the artistic line we will follow that specific year, and within that direction we look for works that make sense and enhance the concept.

Marco Mancuso: Sonar is considered today (from many years) as probably the most important international event of advanced, club, experimental and electronic music. In the same time, Sonar in the last years opened to multimedia arts and audiovisuals experimental projects. Do you think that this kind of festival concept (a leading concept for many other international festival worldwide) is still working good in your opinion? Or are you thinking to some chances on the formula and general concept?

Enric Palau: Sonar is a specialized festival about electronic culture. Electronic culture englobes new media arts and audiovisuals, which are actually one of its core languages. We have always presented new media and audiovisual works, and the work we have done all through the years is presented under the name of “A La Carte ” together with the SonarMatica and Sonarama programme’s history and the screenings of SonarCinema. We won’t change our “formula” on which Sonar has always been based.

Marco Mancuso: What is changes from the the first editions of Sonar? When it was a small event for electronic music? How is possible to work on and live an experience like Sonar and how your lifes and professions changed in the last years?

Enric Palau: We have fun, and at the same time we are very meticolous with all the aspects of the festival. That is our way of living and dreaming.