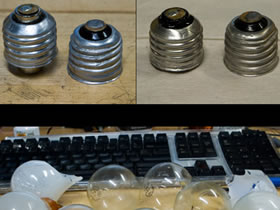 During 2007 edition of Sonar festival which ended a few days ago in Barcelona, a project by Jeff Lieberman, entitled Light Bulb, was presented at Sonarmatica , a show which takes place together with the usual festival. This year Sonarmatica presented a selection of works dealing with the ‘magic’ side of technology, showing processes which cannot be understood merely with intuition and trigger our wonder.

Light Bulb showed an undoubtly surreal vision, with an exhibition which called to mind illusionism tricks or maybe a paint by Magritte. A normal light bulb hangs in the air within a structure; it is turned on, though no wire is connected to it.

Actually the installation shows two interesting phisics phenomena: magnetic levitation and electric current transmission without wires and has been inspired by one of the most important researches by the Croatian scientist and inventor Nikola Tesla . The first part of the project deals with a challenge which has always stimulated human beings: how to win gravity. One of the method to make an object levitate, which has been already known since the first decades of the last century, is magnetic suspension. You can make an object float in the air thanks to a magnetic field using magnetic forces of attraction or repulsion to win gravity. This technology is used in Japan for public transports. There are trains which travel in suspension by using a very strong magnetic field.

The second phenomenon which inspired Lieberman for the planning of Light Bulb was carefully studied by Tesla between the end of the 19 th and the beginning of the 20 th century. Tesla created a system which could transmit energy without wires by using the resonance of big copper wire coils for the transmission. However, Tesla’s invention was never used on a large scale.

To combine the two principles in one device, first of all Lieberman put an electromagnet which generates a magnetic field thanks to electric current on the top of the installation structure. Then he put a second magnet, whose power interacts with that of the first one, into a light bulb, together with various circuits and a Hall effect sensor, which measures the position of the levitating object.

In order for the magnet to be steadily suspended, a retroactivity control system using Hall sensors ‘ feedback was provided. In that way the power amplifiers connected to suspended electromagnet are set and so they make the structure steady.

For the second part of the project Lieberman created resonant transformer which works as Tesla coil and transmit electric current through the air from the bottom of the installation to the levitating object.

The transformer generates a signal very similar to that of radio waves’ thus making alternating current transmission possible.When the coil at the bottom receives power the other coil inside the light bulb is given power too. The receiving coil is connected to some LEDs too, which are placed at the light bulb’s bottom and receive alternating current which is converted into light.

The work of art showed in Barcelona is the new version of a previous prototype with the same title. But compared to the prototipe, in the most recent version the bulb’s light is brighter though using less electricity. By the way, the author would like to prove his device even more.

Jeff Lieberman comes from Massachusetts , and graduated in mathematics and physics in 2000 and hold a master’s degree in robotics and mechanical engineering at MIT. He is interested in completely different topics. He is an eclectic and many-sided artist: musician, photographer, performer, creator of robotic installations and kinetic sculptures. He also took part to a BBC2 programme and to a Discovery channels programme entitled ” Battle of the Geeks”, where a group of inventors and scientists challenge each other to design an aircraft.