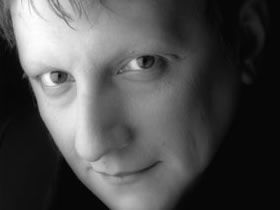 Robert Lepage is making his new debut. The artist has just returned from Salonika, in Greece, where he was awarded the prominent Europe Prize (he resulted first equal with the German Peter Zadek, but this latter, not taking part to the ceremony, basically refused the prize and 60,000 ).

On “Radio-Canada” website you find a videoclip showing a short interview with Lepage and explaining this art change very applauded in Greece , where , besides, the actor performed some scenes of his shows on a simplified stage.

Lepage’s show had at first a planning stage, followed then by the first public display happened in winter in Newcastle (at the Northern Stage Theatre). Theatre sans frontiéres leaded by Sarah Kemp and John Cobb hosted him for a long time in Newcastle . It dealt with a perfect situation for a work in co-production because not particularly exposed to the general public’s criticisms and far away from the spotlights of the big cities.

In fact each new art project produced by Lepage arouses public, critics and mass media’s great interest: “When in the past I performed in Montreal I had 8 weeks available for rehearsing and I spent 4 weeks having interviews. Here in Newcastle I can concentrate on my work. I can’t do that in London because performing in the metropolises is sometimes a frustrating and demanding job. Here you understand why artists choose towns to work. Just think about Pina Bausch who opted to stay at Wuppertal . Nor Frankfurt am Main or Hamburg , but Wuppertal !”

The new work, Lypsynch, which is waited in fear and trembling at the Canadian festival, will see a great amount of technological devices and will be enriched by a dramaturgy for 9 actors coming from all around the world. The piece was written by more authors (among them we find Marie Gignac, also co-writer of La trilogie de dragons . The whole 5 hours and 30 minutes show different settings characterised by the sound framework and not by visual effects, performed in several languages (French, German, Spanish and English).

The planning stage of the project, basically the result of an improvisation work, played a pivotal role: the same Lepage admitted that artists’ inspiration had underlain the whole work “We act. We create something just brainstorming and then working on the ideas. We improvise and then we wait to see what happens. After a while it seems that the show itself is unveiling before us.” Speaking without any pomposity about his work of director, Lepage asserts quietly “At the end of a performance planning stage I often feel more to direct the traffic rather than a show. My job consists in bringing ideas and performances where they can express more. Sometimes my task is just to say “no”.”

Lypsynch is a consideration about the voice nature, that is the soul’s “DNA”. The final version is expected not before September 2008 at the Barbican Theatre in London . The full show will last 9 hours and tell stories ranging over a period of time between 1945 and 2012. While being on tour with the memorable La trilogie de dragons which made him an artist of international renown, Lepage seems being returned to the joint writing and epic narration  with a particolar focus on the multilingualism- typical of his first professional formation when, very young, he took part in the project carried out by the Théatre Répere.

As we could appreciate in Le sept branches de la riviére Ota , this new show is depicting on its turn lives and destinies interweawing unexpectedly after long years. In the brochure of the show you can read that Lipsynch is like a giant meccano leading theatre to the record high of his narrative potentialities, something like a Rubik’s Cube multiplying its faces and consequently showing the way for new solution prospects.

By courtesy of Radio Canada and of its journalist, Christiane Charette, we show here some significant extracts of the interview of Lepage given to Radio Canada . The interview’s title is Theatre is a journey.

Christiane Charette: Robert Lepage, you have just come back from Newcastle , UK , where you presented your new project, Lypsynch. Why did you choose exactly the UK ?

Robert Lepage: Because of the my collaboration, important in economics terms, but also for other reasons. We were guests of a little theatre, Théatre Sans Frontiéres, set in the North-Eastern England, sharing the same ideas and far away from the capital, and that was a pros. During the planning stage I didn’t want distractions, I needed time and I opted for a little place, almost hidden. Of course if you want you can have fun also there, but London offers much more .

Christiane Charette: English people love you, you have a special relationship with Great Britain althouth you are worldwide known.

Robert Lepage: In UK you find money, resources and ideas. And then Québec people feel themselves English!

Christiane Charette: What do you mean?

Robert Lepage: First of all English is a way of thinking

Robert Lepage: Indeed, and they are able to perform very well for theatre as well as for cinema.

Christiane Charette: Do English critics make harsh remarks? Have you ever been tanned?

Robert Lepage: Actually I cannot say that. On the contrary, I’m very pampered, I won several prizes and I never took criticisms badly. Of course, sometimes I don’t agree, but I accept every kind of remarks. The Le sept branches de la riviére Ota ‘s première in Edinburgh was utterly demolished, while the following year it was regarded as the most prestigious showIt deals with the same people who demolish you at first, and then praise you. There are directors showing spectacles every 5 years, I show my performances every 10-12 years. If the first group is mauled, they are ruined, while as for me, I have a so wide production that a hatched job doesn’t change my life. Obviously it can happen that a show is successful or not, and you can accept criticisms. I don’t feel hurt, but by the way I don’t feel hard done by English critics.

Christiane Charette: You often be on stage when the show is not completed.

Robert Lepage: The completion of a show never occurs, I need to perform it anyway, not completed. For me première is never a début, I look for a conversation with audience. It worked for many past authors, also for Shakespeare: they searched for an answer coming from the public, it was the signal that the show goes on well. Actually, I am not interested in perfection, but on what spectators can offer the performance.

Lipsynch, performed in English, German, French and Spanish, takes a lot from the actors and their improvisations, we don’t know what the result will be. In this show I won’t act, I consider myself a coach rather than a director. Not everybody can work with me, I expect answers from actors, I give them freedom and leave scope for their capabilities. Yet, there are people who need a direction. I start but don’t know which direction the show will take. Actually, I don’t know the end. Life leads you and you won’t know where, exactly as for theatre.

Robert Lepage: At first we promised a show lasting 4 hours and a half , then 5… It is not long, when you see it, it doesn’t seem lasting a long time. Once you are in theatre time seems broadening, it occurs when you are before an enjoyful event. When a performance is well worth watching, that is to say when it is obviously inspired, people is well inclined to stay and watch 2 hours more. Personally, I take all the time I need to tell, to explain what is happening and why and illuminate the relationships among stories… On tv, on the contrary, everything has to be succint. And then the break plays a social role, as well as the show. Spectators eat and drink something, it’s a marathon for everybody, for the public as well as for the actors. It the end, when the show is finished, it will last 9 hours, from 2 p.m. to 11 p.m. With some breaks of different duration. Actually we are speaking of a journey, you are taken abord. The more people watch it, the more they appreciate. They’d like it lasted more, because they regard it as a journey, a journey along with us

Christiane Charette: What is Lipsynch about?

Robert Lepage: Lipsynch is a voice show. As theatre artists we are tied in people’s mind to images, we have a kind of “virtual big name”. This performnce is given more a sound expression, rather a visual one. Yet, voice is different from the term “language”, it’s not the same. You often hear the term “voice” as a synonym for “word” or “language”, while they are three different things. Voice is linked to your mother, language is a code and and words are people.

Christiane Charette: What an intellectual explanation!

Robert Lepage: I discovered this difference examing voices. Voice is everything shocking you, it’s what you go on search for to get answers about the world. Voice is very important, it is the first thing babies know about their mother when they’re growing in their mother’s womb. And word belongs to a person and reflects his/her soul. Language is a communication code, where theatre, dance, movement, music live in: they are languages as well. The word is the action to express thoughts, while voice is inner, it’s bound to senses, to the life philosophy.

The actors I put on stage come into conflict with voice, word or language. They stample and have difficulties in these three areas. For instance an actress play the role of a young woman affected from aphasic disorders owing to a brain tumour in the word area . She can’t speak ,but she can use her voice to express herself.

Christiane Charette: What do you think about your voice?

Robert Lepage: Every day I discover something more. I never really heard my voice, actually. I have got several compliments for my voice, recently. I never thought it had such an evocative power. And then people’s imagination is influenced more by radio than by tv. Radio evokes sensations.

Christiane Charette: It would have been a pity if you worked for a radio station!

Robert Lepage: In the 80s I lived a break down and thought to work for a radio, I forgot why I chose to be a theatre artist. Indeed, I love radio. I prefer giving an interview to radios rather than to other mass media. On the radio you feel more free.