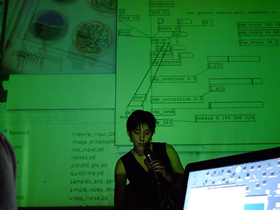 On the 28, 29 and 30 of April Rome saw for the first time in his history the Italian convention of Pure Data, a grafic programming language for manipulation and real-time creation of videos and sounds, as well as managing program for interactive systems. The event, result of the collaboration between Binario Etico, Feramenta and Strike, is the first organized effort turned to the institution of an Italian community, using and programing this free and open source software.

Pure Data, originally invented in the 90s by Miller Puckette as a software for the computer music and multimedial work production, is the free and improved version belonging to Max/MSP (and also in this case Mr Puckette is the author). We are speaking about a modular system, expandible through libraries, externals e plugins. That is to say that the user can enrich the software skills and modify some of its properties, besides creating his own ad-hoc patches.

Yet, this game is not adressed only to programmer geniuses or hackers. The system can be used as a simple and normal application fit to do pre-established and precise tasks. Once you had got rid of the installation step, nowadays no more representing a difficulty, the user can easily find a range of patches ready to be used. Here functions take the form of “objects” connected to each other inside a graphic framework moduling and controlling the dataflow. Patches are “home-made” applicative devices, a kind of drawn and stylized , apparently mechanical, machines, logic and intangibile worlds made of paths traced by little bricks (that are objects) similar to the Lego’s toy.

Representing the digital evolution of the “Big Glass”, these mechanisms, made of rectangles tied to other rectangles, have the same magic properties of the “ancestor” “useless machines”, but with some differences. The Duchamp’s “useless machines”, instruments for criticisms towards a chatty style, work without following rational logics and break off the cause-effect relationships between objects and events, offering a point of view of the space-time world different from what we are used. The useless machine states critically the rigid profiles of rational technicism (effective machine, war-machine) forecasting a world characterised by lightness, irony and liveliness, a world where art, flying beyong thoughts, is the vital energy engine and plays a major role.

But this concept doens’t include PD’s patches such as animals without head nor tail, working outside every standard. On the contrary this language, as any else, has its own well precise grammar and syntax. The impressive effect derives from the objective and use: Pure Data implies and doesn’t address reproachful words against imperfections, errors, the unfinished, abstract and unknown. It deals with an artistic, aesthetic and conceptual research.

As a matter of fact the results are always to be considered as an experiment. The specific use of a determined piece of code is like a changing recipe according to the available ingredients and to the mood of the moment. The opportunity to find patches and applicative devices derives from the nature of PD, that is a free software, managed by an open community based on values of collaboration and share. The competition typical of the free-market economy and of the progress level is won thanks to the interaction between artists and programmers working together in order to improve instruments and production conditions.

A surprising amount of students and people, interesting for variety of formation and skills, took part to the convention in Rome . Starting from basic grammar and syntax, together with phisics and sound psychology notions, in three days the convention showed much more organic sound and video elaborations, with a detailed exhibition of Gem, PDP and Pidip’s libraries.

A pleasant atmosphere, the friendly context and a mix of learning desire and curiosity triggered off the birth of the first community in Italy . Let’s just wait forbang!.