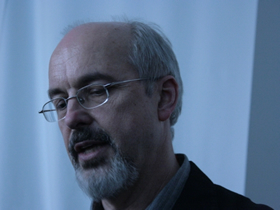 Love and death, light and darkness, the life circle, the path of every human being. Bill Viola keeps on exploring the great topics of existence with his controlled not narrative strongly symbolic style.

Waiting for presenting his project Ocean Without a Shore at Venice Biennial , his latest work once more based on the close relation between opposite concepts, the artist showed three videos linked to The Tristan Project at James Cohan’ s Gallery in New York , a work meant to accompany the production of Wagner’s opera Tristan Und Isolde directed by Esa-Pekka Salonen , presented at Lincoln Center in May, after its debut in Los Angeles and Paris in the past years.

An ambitious project, which includes some of the favourite subjects of the artist. The show was the chance to enjoy a little selection of them, as BIll Viola himself explained at the opening performance: ” For Tristan Und Isolde’s project I made a 4 hour and a half video meant to be projected during Wagner’s opera. I took some of those images and some others I shot but which hadn’t been included in the project and transpose them to separate works with no music. Three of them will be presented here “.

In the videos in question, The Fall Into Paradise , Isolde’s Ascension (the Shape of Light after Death) e Passage Into Night , the themes are typical of the production of the artist, who has always been attracted by the great mystic-philosophical traditions such as zen and sufism and by medieval and renaissance icongraphy, which he transposes in modern terms. The eternal balance between life/love and death is the thematic heart of these works. While in the first two the crucial element is the water (symbol of death and of purification and rebirth at the same time) characterized by semi-darkness, in the third video a shape moves in the bright light of the desert, wrapped by a heat burst, like in a purifying initiation crossing, once more ambivalent in its final destination.

Sometimes accused of superficiality and dullness, Bill Viola steadfastly built a figurative universe where the East and the West blend, together with great thought currents and the present and the past imagery . The wide development of images leads the audience to focus not only on the end point, but mostly on the action itself, on the course that leads to the final revelation.

The beginning and the end of every thing are inseparable, one extreme end implies the other, in art as in life, as the artist said to us: ” Love and death are two sides of the same thing.When my son was born, he came out of my wife’s womb and I took him up in my arms and realized I was taking up death and love at the same time. I was watching that little chest pulsing- newly-born human beings have 160 heart beats per minute, more or less those of a hummingbird- I saw his mouth looking for air to breathe, and I realized he could have stopped breathing in any time… that’s when I understood life and death are absolutely bound “.