Sonar Music 2007: From The Past To The Future 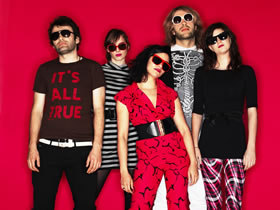 Those images seem to be old movies frames ruined by a provoker, or either a nostalgic, with some smiles. But they’re nothing but ambiguous and seducing images that represent Sonar 2007.

As we discover from the festival site, they’re works of the early twentieth century of Lejaren A’ Hiller that, with an expressionist will of chiaroscuro and an aesthetic taste for eroticism, tell stories about surgery through different époques and continents. Every picture have been though marked with a smile on a character face. Why is this? First of all, to let the spectator have more question than answer. And obviously the operation perfectly worked. And then to underline the absurd of all the returns, so the clashes they provoke between subject/object in foreground and background (to follow the visual parallel).

Paradoxically though, Sonar is a festival that has been played for a while with returns, and more and more it plays. Just a few, in 2000 Marc Almond, 2002 with Pet Shop Boys, even Chic in 2006, we’re obviously waiting for Devo and Beastie Boys this year. So, who’s the addressee of the explicit irony graphic? Immediate hypothesis, even if not right of course: the new generation of musicians  both electronic and not, it doesn’t matter  that is deeply inspired from the potential mix of all the époques and styles. It is the art of the past projected into the future that can characterize the present of this new century. Better than the repeated attempts of absolute, by now empty.

This dilemma meeting/clash between époques and styles is one of the most fascinating aspects of this edition. Nu rave and rock’n’rave are direct reference. More than 15 years of acid-electro-techno music culture synthesized in few weeks of listening. Even if not comparable to the original experience, they reproduce at least part of that path.

It is exciting to inherit so much and live it in so little time. And what’s going on? Some of the youngest, some of those that were part of the early 90’s rave phenomena, used to listen to the cartoon jingles sitting near mummy, they are suddenly able to live real music, creating something inspired but new. Because they add the desire of melody and guitar to transform the rave scene, as radical reaction to disco and rock, that turn party music into powerful and funny songs, actually they bring enthusiasm.

Some find difficult the admission, some other are ironic on it but this is the synthesis: returning it’s even new. Maybe it’s only the vision, as the intent to mix disco-rock-acid-techno following the hip-hop ethic of the “harder-faster-better”. While the rational  and celebrated  electro-minimal of the first part of the new century is imploding into boring purism and mannerism.

Ok for Daft Punk and Chemical Brother, the masters. Then 2manydjs and LCD Soundsystem to close the course but the mix exploded last two years with Simian Mobile Disco, Justice, Klaxons, Mstrkrft, Uffie, Digitalism, Para One, Dj Mehdi, New Young Pony Club, and all the others that seem to be an manner exercise, but they also reveal to open and curious minds the ability to arouse a sudden, violent and global enthusiasm that remembers the 1992, that is 15 years ago.