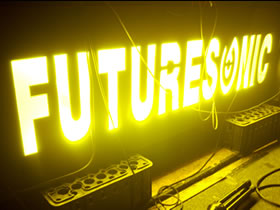 Futuresonic 2007 brings reflection. A festival of ideas and pioneers  as the curators of the event say  dedicated to the celebration of a fertile forty years (1967-2007), that has an expressive strength able to inform most of the creative energies of the new generations addicted to the exploration of relationship between sound and image.

An essential genealogy, the conscience of the roots of a social and artistic movement that finds nowadays its common denominator inside the electronic music, even if its soul belongs to the pop culture of the last century.

The research goes further. Futuresonic will occupy from 10 th to 12 th May 2007 emblematic locations in Manchester , in an itinerary path between memory and innovation. The Arndale Shopping Center is the heart of festival and it was once theatre of the explosive attack of IRA in 1996 but even the starting point for an economic boom that carried away Manchester. A disorienting effect and even a reflection on the meaning of art in relation to the environment, mobile technology and history. The commissioned artists will give birth to a re-interpretation of the commercial and urban space, drawing paths, underlining the limits, involving a reflection on the social meaning of the technology and the sense of the art today.

As Drew Hemmet underline “We’re immerged in a growing mediatic context, made up with images and sounds. We’re surrounded by mobile technology, phones, screens in squares and streets, wireless system everywhere. In this new persuasion époque, is it easier to understand art? Or more difficult?”.

Actually, defining an art object today seems a vain enterprise. Why does the CD on my desk should be (contain) an art work? And if so, what gave it this status? If we then think about performances, happenings, prints representing an installation or a vj-set, everything seems getting more and more complicated.

Maybe the question are inadequate, most of all when answers are urgent. The fact is that art escapes reflections and imposes in a powerful and direct manner in our life, that is economical choices, affection memory, as background or foreground of complex changes that involve in a unique skein society and technology. Nowadays art is everywhere and nowhere, on my iPod or my phone, on a t-shirt or inside a spot. There’s not only the lost of the aura of the work, as Walter Benjamin said, that is being here and now in a unique manner, but even the lost of the aesthetic as reflection about art, rehabilitated as form of autonomous knowledge.

Brian Eno certainly got the message when he realized Music for Airports. And that’s the reason why Futuresonic presents Art for Shopping Center, a singular expo of site specific art works inside one of the most neutral even if populated place of the Occident: the mall. Through the exposition of original works by international artists, Futuresonic proposes a way to re-write the economic relation and the everyday life through artistic de-contextualization and the privileged observatory of the creativity.

The Social Technologies Summit is another interesting container, that proposes a series of interdisciplinary conferences to reflect on how mobile technology changed our social habits, our urban paths, our way to be in space and time and most of all the way we relate with people. The Social Technologies Summit promotes an idea of technology as social practice, exploring the impact on the public sphere and analyzing in particular the new form of technological network.

Projected to a social prospective again, Evnts 2007 is the container of artist and organizers that see the festival such as a meeting and exchange moment. Inaugurated in 2005, Evnts collected a community of workers that is now a festival inside the festival.

Futurevisual celebrates the days of the multimedia aura. The legendary UFO Club of London born again at the Futuresonic forty years later, with the participation of once protagonists, like Berry Miles  historical activist and reporter of Pink Floyd from the psychedelic London -, near new talents of the av contemporary scene, like Semiconductor.

Eventually Music for Beep Generation is the music and pop heart of the festival, with the participation of musicians and Dj’s of the electronic Manchester scene. A tribute to the rock soul of the dance electronic music.