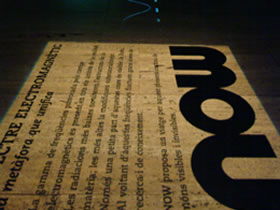 Some traces of events, collaborations, meetings, inaugurations enriching the Spanish panorama in this spring 2007 and which prove the ferment in the environments of research and study on subjects connected with the relation between technology, science, environment and economics.

A significant example of the activities revolving around those subjects are the meetings of NOW – meetings in the present continous, held on the 22 nd and 24 th of March 2007 at the Centre de Cultura Contemporània de Barcelona – CCCB .

At its third edition, the meetings are part of the platform NOW , which was conceived as a middle term project from 2006 and 2009, an active and fertile territory of reflections on the present and its transformations in the field of science, technology, art, society and spiritualism. The principal idea of the project reflects the necessity to change generally the approach to studies , research, a new way of opening to novelties that the world of art, new media, technology, techno-science propose to professionals and not.

The change should bring with it new perspectives and above all the idea that each subject has to be faced through the confrontation with other disciplines, each point of view integrated with others. Some key words of those realities are participation, sharing, multidisciplinary , the concept of between is significant of this kind of approach, reached through dialogues and confrontations to the concept of synthesis.

One of the aims of the organisers of meetings such as NOW’s, is to be outside classical schemes and usual forms of meeting and information exchange, generating a process of research, creation and diffusion bringing wit itself different local and international agents involved in promoting a change of paradigm in the society of information and of conscience and globalised cultures.

At the beginning of NOW Juan Insua ‘s stuff invented the metaphor of the Electromagnetic Phantasm as symbol of the content of the project, a single element made up by different frequencies, subjects dealt with during the meetings, which represent different explorative phases of a dissimilar substance and meanwhile unique, or , better, necessarily composite and interconnected. At www.cccb.org/now/links/index.html you will find the 7 subjects connected to the referring links:

Open science  sharing and communication between art and science

During the last meetings connected to the 4 perspectives New Activism, Emergent Culture, Open Science and Eco Factor, David Peat ( Liverpool , 1938) pioneer of the connections between quantum physics and psychology, has dialogued with Victoria Vesna (Washington D.C., 1959), artist and researcher careful to the influences of technological and scientific innovations on the perception of reality. At the end of the conference (in) tangible: nanoperception and quantum world , the lecturers were astonished by the public affluence, more consistent than at the beginning of the meetings, according to Insua, the director.

Speaking about the birth of this conference, “Raquel Paricio had the idea  tells Vesna- to make an artist and a scientist dialogue on the intangible world of nanotechnology. So David and I exchanged our e-mails: I had to tell about my work, of what pushed me to nanotechnology, the dreams and the nightmares marking it. David Peat had to dialogue with me, and so it was, with a perfect harmony which has heated the atmosphere as the public too perceived. A true complementary exchange, an analysis of the artistic work, in relation with the quantum physics, the science meant in its processes and sometimes in its arrogance, David Bohm ‘s work and the importance of art in the scientific culture and vice versa.

This interest in an interdisciplinary dialogue and in new perspectives of study relating art, science and the fields of perception and cognitive activity, philosophy, psychology, neuroscience, belongs to the approach of the moderator of the meeting Raquel Paricio (Barcelona, 1968). Researcher at the Media Arts & Evolvable Technologies at the ‘ University of Catalunya , she deals with hardware evolutions in the multi-sensory. Raquel Paricio has created the portal www.res-qualia.net  art, science and evolution of the consciousness  a place of meeting, exchange of information, sharing of projects, in which you can find for example BrainLoop by Davide Grass , in the” theatre actions” of TPO Company and in the bio installation by Dmitry Bulatov

The hybridization between art and science is here considered in the potentialities it unchains in the evolution of the awareness and in the capacity of generating a fertile relation between living organisms and artificial systems of intelligence and perception. The term qualia , that is to say, “minimum unity of conscience” belongs to the field of philosophical and scientific research and it is strictly connected with the studies of perception, mind and artificial intelligence.

The project Res-qualia binds directly this research ambit with the state of art which rises to a catalyst role in the attempt to provide innovative hints, of new point of views in facing the countless interrogatives of the human and scientific evolution. Conscience and the substance, mind and artificial intelligence, nature and intentionality, genetic manipulations are some of the subjects within the portal of the Spanish researcher: a meeting point for an international community able to confront and give life to new projects.

The characteristic of the confrontation and dialogue between different disciplines is present in the inaugural program of the brand new structure of Fundación La Laboral Centro de Arte y Creación Industrial , work by designer Fernando Gutiérrez , inaugurated on March the 30 th 2007 at the seat of the University of Gijón in Asturie. The centre was conceived as pole of creation and artistic exchange, with a strong vocation for economic progress, meant as development of ideas, collaborations, and new tendencies. In this sense Laboral is not defined as a peculiar form, neither simple museum, nor simple creative lab, but a true multi-disciplinary centre in growth.

The initiatives organised on the occasion of the opening try to explain it better. The two shows Feedback , retrospective on the concept of “reactive” art, in the double meaning of “answer” to a code or an instruction and of light and movement in the forms of kinetic art, Op Art up to the cinema and TV and Gameworld, exploration of the world of video games as form of art and expressions of contemporary art which draw on this universe.

Last but not least, the intense panel of conferences coordinated by José Luis Brea , professor of Aesthetics and Theory of Contemporary Art at the University Carlos III of Madrid and director of the magazine Estudios Visuales: La Era de la Imagen Electrónica , which reconnects with these reflections, the meetings on NOW, sharing their form and under a certain point of view, their typology of interventions, even if focused on personalities linked to the world of media, art and Academic research.

Jordan Crandall , founder of the on-line magazine Blast , Alex Galloway , one of the creators of Rhizome , the theorist of media Lev Manovich , Anna María Gulasch of the University of Barcelona, Pedro A. Cruz , of the University of Murcia, and François Bucher , Juan Martín Prada , Siegfried Zielinsky , have analysed the impact of electronic images on our society, with a particular attention to the influence on artistic practice and on the production of cultural meanings, to the research of the transformations which will take place in the next future.