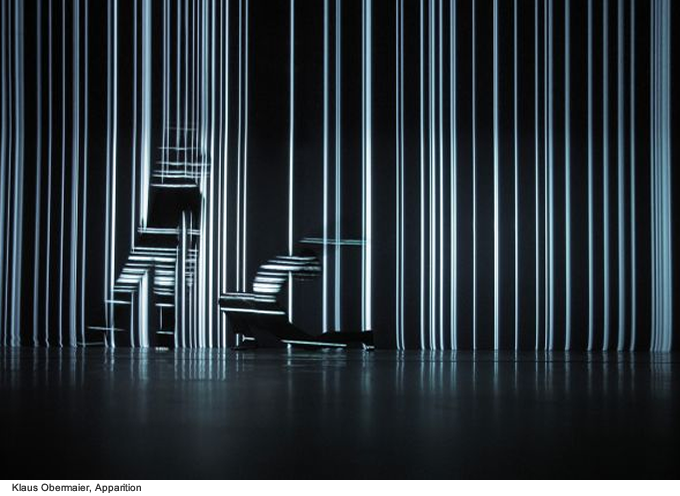 Klaus Obermaier, electronic musician and Austrian digital artist, creator of many multimedia and cross-media works (from video art to web projects, from interactive installations, to computer music), has participated on the 14th of February in the initiative “Mercoledì da Naba”, meetings and cultural meetings of the Nuova Accademia di Belle Arti di Milano (www.mercoledinaba.info ).

As students of the Naba Master in Digital Environment Design, we have met and interviewed the artist in our laboratories before the conference. On this occasion the artist illustrated his artistic path and the use of technology within his creations.

Klaus Obermaier has carried out since the Eighties innovative works in the field of dancing, music, theatre, new media, he has participated in the most important international festivals (Ars Electronica di Linz, Intermedium/ZkM, Singapore Arts) and has collaborated with the dancers of Nederlands Dans Theatrer, Chris Haring, DV8, with musical groups such as Kronos Quartet, the Art Ensemble of Chicago, Balanescu Quartet and with musicians such as Ornette Coleman, John Scofield, Peter Erskine.

D.A.V.E. a video-dance show, was presented at the Villette Numerique in Paris in 2002; Apparition, interactive choreography, at Ars electronica 2004. The last production for the Bruckner Fest of Linz in 2006 in front of ten thousand people was Le Sacre Du Printemps by Igor Stravinsky, concert for orchestra, interactive dancing and stereoscopic 3D images by Ars Electronica Futurelab (http://www.aec.at/futurelab/en/). Now, the artist teaches and collaborates with different Universities and prestigious cultural institutes and recently he has become visiting professor at the IUAV Venice for “New media in dancing, music and theatre performance”.

The reflection by Klaus Obermaier started from a clarification on the cultural value of our technology, of the “normality” in his application in the field of art, but he underlines the necessity for a narrative integration of all scenic languages, included new technology.

Obermaier goes into how design technology must develop simultaneously with the concept itself and not materialize during the last phase. Individualize technology is fundamental because it, such as any other element of scenic composition, modifies the structure of creation. The comparison proposed by the artist is particularly meaningful, as it is of fundamental importance to individualize since the beginning the costume for a performer, as this changes radically its way of preparing, playing and staying on stage. As it should be for technologies! But theatre production reasons impose hierarchy among the materials used for the staging, and of priority too. 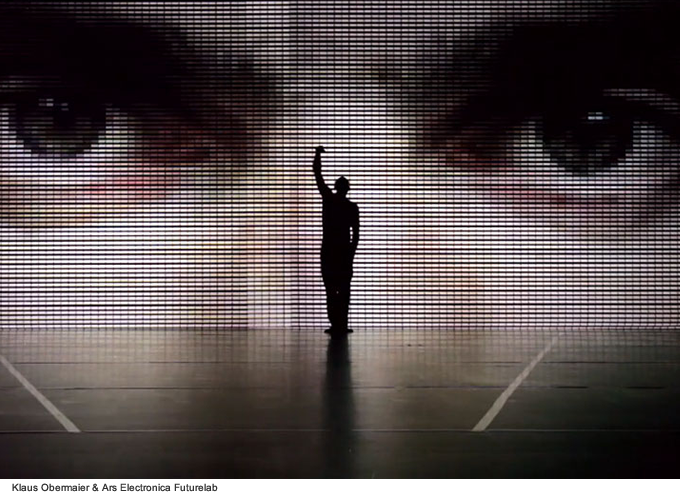 Annamaria Monteverdi: Klaus, how do the approach to technology changes in time?

Klaus Obermaier: The approach with technologies is changing as time passes by. The technology itself is changing and so the creative possibilities are. Only fifteen years ago any significant creative work wasn’t possible, for example. I’m not searching for the newest technology and I don’t want to be the first to use it. If technology doesn’t stimulate my performance, well it doesn’t have any value for me. In my experience I always waited lot of time to use technology in the right way, until it didn’t have the right power of calculation that allowed me to use it as I wanted.

I’m remember when I started with using video. My first real pro instrument was a Mac I bought in the first 90’s, as Mac was the only computer that allowed the video manipulation. In this case possibilities change because technologies change. You could maybe remember the first pioneering works made by dancers that, with their movements, controlled sounds…this was impressive for the public! When I want to do something with technology is because it is the right time to work on what I’m thinking, because it means something, because it communicate something, and not because it’s only effective! I do not work to demonstrate what technology can do.

Annamaria Monteverdi: The artist must have a suitable competence in technique to understand the possibilities of a creative development with relation to other media on stage.

Klaus Obermaier: Let’s pretend the theatre director asks to the characters: “What can we do on stage?”. No, the director knows what the actor can do! So do I. I want always to know what technology can do, then I can push the limits of the action with technicians, programmers and maybe find new solutions. It means that I want to try it alone! D.A.V.E. (Digital Amplified Video Engine) is a dance show interpreted by Chris Haring on the hybridization, cloning and manipulation of the human body theme in the époque of the biotechnological reproduction. The technology operates on the organs: layers of video images stop on dancers bodies, adding limbs, eyes and mouths that virtually deform the dancer without physically touching it. The body turn into a mythological figure, half human being and half animal, half man and half woman, but half human being and half machine as well.

At first the spectator is caught unprepared. The doubt is about the images it’s seeing: is it an hologram or a real human being? The body changes continuously under its eyes without a real perception of the change itself. Mutation as the nature does, “happy” alienation of the man inside the technological sphere, painless passage to a new reality, a real natural artificiality. The video is part of the body , better, the dancer is part of the video. The hard part of a spectacle such as D.A.V.E., where the intention is to conjugate dance with technology, is obtaining a perfect integration between the different parts: video projections, dancers, music, public. 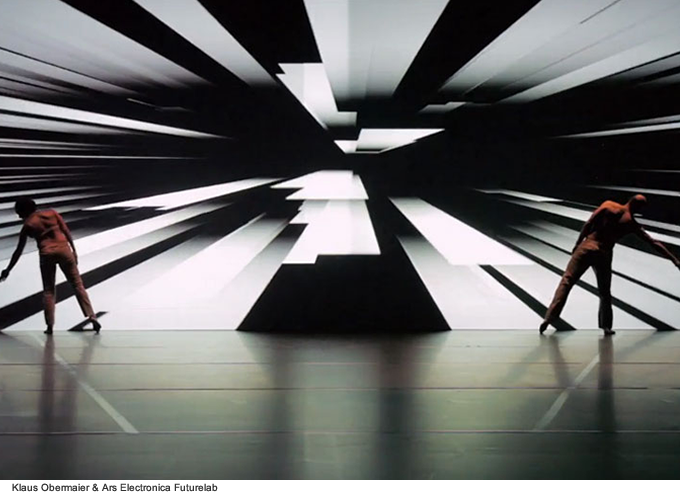 Klaus Obermaier: If we talk about programming, the first problem is related to the limits of the software. I use several software to solve the hitch. D.A.V.E. is an example, as it is completely realized by me inside MAC architecture with programs of editing, video cutting, compositing, 3D programme and “learning by doing” obviously. In projects such as Apparition or Le Sacre du Printemps, where there’s a higher interactivity level, I collaborate with a programmer. On one side, programming is freedom, but I’m not interested in programming rather in understanding what I can get from these programs.

Annamaria Monteverdi: Which is the relation between performer and technology?

Klaus Obermaier: In D.A.V.E. and in Vivisector, performers are obliged to react in relation to the video, as the programmed parts are related to the form of their bodies. This is the reason why design must be precise parameters. The transition between the status, image and body, is fundamental. One follows the other, even if the limit is the impossibility to improvise of the dancer. The movement of the body become in a while a video projection. So we ask ourselves either the body is real or virtual! 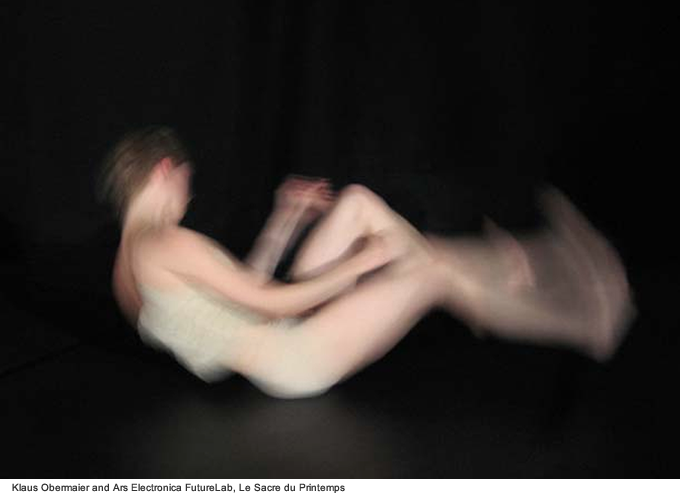 Vivisector is based on the video-technological concept of projection on moving bodies as D.A.V.E., but it goes further. The difference is the video projection as only light. The body is therefore strange. Moreover this combination of videos, bodies, sound space produces a scenic effect of great unit. Flash is another used type of light, completely programmable so that the performer gets freer. In Apparition technology is completely interactive, images and sounds are generated real time. Motion detection perceive movements of dancers that, not connected to the projector position, are free to improvise. The objective was to create an interactive system that was something more than an extension of the performer, rather its partner. There are three fundamental parameters in the interaction with dancers: the proximity, the velocity and the size of the movement.

In Le Sacre du Printemps the space is conceived as immersive, thanks to the polarized glasses wore by the public. Stereoscopic images are generated real time by stereo cameras on stage and a complex computerized system transfer the dancer Julia Mach into a three-dimensional virtual space. The human body is the interface between real and virtual once again.

Moreover, thanks to 32 microphones, the entire orchestra is integrated in the interactive process, because musical motifs, individual voices and instruments influences the shape, the movement and the complexity of the projections and the dancer. Music is no more a starting point but a completion of the choreography as well.

Annamaria Monteverdi: How the right balance between dancer’s creative freedom and programming is possible?

Klaus Obermaier: Inside creativity freedom you must set above a basic structure that modifies during the work. The digital system becomes the third element of the performance and has the same limits and potentialities of a theatre drama or choreography. The first thought is to work easy anyway, and when you don’t think to create something new, then you find innovative elements!