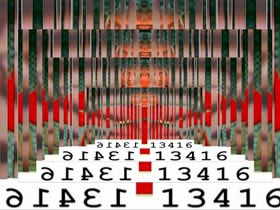 Since last 1st February you have read a post on the netbehavoiur.org mailing list ( http://www.netbehaviour.org/pipermail/netbehaviour/20070201/004227.htm ), an open call to collaborate to the artistic and editing project DIWO (Do It With Others). What you have to do is sending any texts, audios or videos you have. They will be shown in an exposition in the HTTP ‘s London Net Art Gallery .

For those who are not so familiar with the mail art and couldn’t visit HTPP’s Gallery where the projet is shown, we suggest an accurate inspection to release the intricate but at the same time interesting artistic net. Obviously everything must be searched on the web.

Let’s start from the beginning: DIWO project was created inside the mailing list netbehaviour.org. International artists and editors such as Marc Garret and Ruth Catlow are collaborating to this project. Indeed, they are co-fondators of the digital art collective group Furtherfield.org , one of the project promoter. It reminds straight away to the ribel and anarchic, as also “fluxusian”, DIY ( Do It Yourself ) . At the same times it reminds also the strict relationship with the early mail art projects of the last 50ties. Yet DIWO is not only all that, but it shows itself straight away like a kind of digital rivisitation and enlargement of those politically and economically independent activities characteristic of the mail art. In this case condivision is the constitutive element of the project. (and so it seems impossible not to think DIWO as a product deriving from the latest web developments regarding the potential interaction and exchange of data known under the abused name of Web 2.0 ).

Digital mean and, in particular, web virtual territory in which DIWO operates are not the only main differences from the historical mail art. The most important challenge launched by this project consists in the physical exposition inside a Gallery, activity considered as part of the project and destroying any barriers between artist, visitor and curator. In fact they will no longer be considered as different roles but as different activities played by the same person. Trying to break through the old mistrust of the mail artists towards galleries, DIWOists have tried to make the exposition the innovative element of the project.

That raises a lot of questions, as you can read on countless posts on the issue put not only on the same mailing list, but above all on the promoters’ blogs. How is it possible to manage in organizing works in a limited physical space outside the web? And above all: what the organizers will do without operating a selection of the works of art? Selecting them would in fact means immediately destroying the open and spontaneous character of the e-mail art. And, as last question, how will the exposition be carried on in order to make it a real collective and collaborative work? DIWOists discussed a lot about these themes. They organized a kind of editorial happening on last 25 February, from 2 p.m. to 5 p.m, in the sales of the London Gallery.

Aving beers and chips and, for some, half listening to the Tottenham match, DIWOists discussed about the organization problems listening to the an-lib comments of the visitors. Not to forget the “net” character of the project the great part of the discussion about the exposition was carried in chat online. Obviously the talks were saved and now you can read them on Ruth Catlow’s blog. http://blog.furtherfield.org/?q=node/96

A compromise between exposition clearness, technological limits and adherence to the project intents was the exposition you could see in the HTTP Gallery on the 25February. The sales were covered by texts and images  sometimes printed in scrolls in order to convey in the best way the net-concept of thread . In the air there were a mix of audio files, exclusively posted in the mailing list. Moreover, in the Gallery the visitor logging in a mail box could consult online, on the website netbehaviour.org, all the works sent by participants since that moment.

Interesting maybe more for the adopted solutions than for quality of every single present work, this experiment opens new ways of sharing and editorial as artistic collaboration. Nevertheless this represents a fertile dialogue between virtual and potentially infinite space in internet and the limited and physical space of a gallery room, drawing new ways that brave galleries are being driving. The project, as the exposition, will end on the 1 st April. It will leave a proof, on this case scrupously made of paper in a catalogue on the subject.