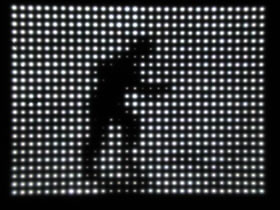 For the first time in the Metropolitan Museum a community gives an overview of the last ten years of videoartistic productions. Closed Circuit is a gathered and concise exhibition showing at the same time a growing interest for new medias, still “hosted” in the Fotographic section, from institutions like Met.

Eight works of eight different artists  from US but not only- traced a little path halfway between a static, brief prospect typical of photos and the dynamic, time-based point of view of videoart, characterised by images interweaved to a peculiar narration. So you find Wolfgang Staehle with is Eastpoint (September 15, 2004) who, in tune with the landscape tradition, “depicts” the goes by of a day in the Hudson’s valley thanks to over 8000 still images synchronized at projection rhythm. Ann Hamilton in abc shifts hypnotically from pictures to videos effacing abc letters painted on a sheet of glass with little concentric hand movements. And in Lutz Bacher’s Closed Circuit thanks to a security video camera, the author portraits in a heartsick way the gallerist (and ex “Superstar” of Andy Warhol) Pat Hearn, died for cancer soon after the conclusion of the project, selecting shots from over one thousand shooting hours.

Starting from the memorable photos in stop motion of Eadweard Muybridge, Jim Cambell in Motion and rest # the project translates essential movements on LED-covered panels, an ideal connection between film experimentation at its beginnings  made of the rapid succession of single shots- and today’s experiments.

On the contrary Maria Marshall e Omer Fast ‘s works are far distant from traditional concept of photos. While the first artist strikes the audience with the fleeting vision of a baby smoker, the second one allures the public with a detailed account between reality and fiction of the walk-ons appeared in Schinder’s List ‘s movie.

Working with different techniques on the distortion of perception, Darren Almond e David Hammons close the artistic track of images in motion. Their work is a super 8 owing a strong reminding power. The image is incessantly turned upside down and inverted as in an amusing optical illusion for children, while in a night in intense colours the bothersome scrape of a bucket pulled along the street emphasizes the alienation of an individual  the artist in person/the very artist- who at night goes floating like a ghost.

Stillness and motion has in common the same basis. Pictures and videos are in fact paradoxically powerful means for accurate portrays of reality as for disarrangement of distinctive features. Just change point of view or of exposure. But what a certain perspective can tell you if expanded in time or if offering the public an association chain is for sure a different story.