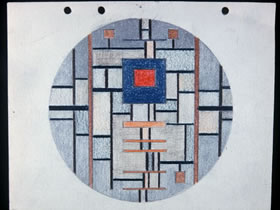 “Projected light and Colour: Early Visual Colour Organs and Light Shows“. This is the title of the talk that Cindy Keefer from the Centre for Visual Music of Los Angeles held at the NTF1 of BFI during last Optronica Festival day in London .

A long and passionate retrospective about the first forms of audio-video expression, from pioneering experiments on coloured organs of 1700, through the multiple projector of lights by Fishnger of the middle 20’s, to the legendary light shows of the 60’s.

Cindy Keefer is one of the founders of the CVM , American centre that diffuses and preserves the memory of the Visual Music , that boasts of artists from the international panorama of audio-visual animation between its founders. In a moment of changing and innovation, the talk of a real historian of the visual culture such as Keefer constituted a moment of recognition on the beginning of this form of expression that the audio-visual art is and how things, nowadays considered actuality, are nothing but old material. This way, she attested an history and an evolution of an artistic hybrid movement that, thanks to new digital technologies, exploded and tries to become integral part of culture, art and contemporary communication.

Silvia Bianchi: How did the CVM born? Can you tell us its story?

Cindy Keefer: Center for Visual Music was founded by a group of scholars, educators, curators and artists to preserve and promote Visual Music. Many of us had been working together for years through other organizations and affiliations. Noted Visual Music historian Dr. William Moritz was instrumental in our founding, and donated his research library to CVM which contains his 35 years of original research and his library and archives of Visual Music and related materials. Other founders included artist Jules Engel, Barbara Fischinger of the Fischinger Archive (who is Oskar’s daughter), and the heads of several major US animation schools. We were also inspired by a manifesto written by Oskar Fischinger in the 1940s, about his desire to orm a collective of artists and curators devoted to what was then called “non-objective cinema” – [today usually called abstract film]. Many of these “non-objective” films are those we still preserve and promote today, especially those of Fischinger and Jordan Belson.

Silvia Bianchi: Have you already collaborated with European realities or is Optronica your first experience?

Cindy Keefer: CVM has organized two presentations/screenings for International Film Festival Rotterdam (including a program of “Legendary Light Shows” of the 1960s); we have provided films from our archive for European exhibitions at Centre Pompidou, Paris (Sons et Lumieres), ZKM (Light Art from Artificial Light), Kunsthalle Zurich (Expanded Eye), Tate Liverpool (Summer of Love) and other festivals and museum exhibitions.

In Feb. 2007 we co-organized with Deutsche Filmmuseum (Frankfurt) a performance of Oskar Fischinger’s real time Light Play performance instrument, The Lumigraph. This was performed by his daughter, Barbara Fischinger, assisted by Cindy Keefer. Films/videos from our archives provided to European venues and festivals described above include those by Oskar Fischinger, JordanBelson, John and James Whitney, Harry Smith, John Stehura and a number of 1960s Light Show films and videos.

CVM also provided the films and videos for the 2005 US exhibition “Visual Music” at the Hirshhorn Museum and Museum of Contemporary Art, Los Angeles. We are currently discussing upcoming programs of both historical and contemporary Visual Music from our archives, with several European museums and festivals. We plan to bring more of Oskar Fischinger’s work to European museums.

Silvia Bianchi: Which is the role of Visual Music nowadays?

Cindy Keefer: Visual Music today is a rapidly-expanding genre. Today we find artists in diverse fields creating what they all describe as “Visual Music”  from experimental filmmakers to video artists, animators, CG artists, VJs, installation artists, painters and musicians. It’s suddenly become popular across so many disciplines, and today a worldwide contemporary scene thrives. Perhaps all of this work being created today isn’t what has been historically defined as Visual Music, but it all serves to help shape, define and further progress the genre. One of CVM’s purposes is to provide educational resources on the history of Visual Music, through our online library, our research center in Los Angeles, and through the preservation and promotion of historical films, as well as contemporary work. Please visit CVM’s online library for a selection of resources about Visual Music.