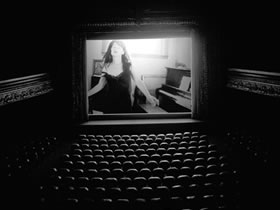 From 2 nd February to 1 st May 2007 in Barcelona Contemporary Museum MACBA (Museu d’Art Contemporani de Barcelona) you can visit the show The Killing Machine i altres histories . Co-producers of the exhibition are the museum and the Institut Mathildenhöhe in Darmstadt ( Germany ). The show will also take place in the Miami Art Central Museum .

We are speaking of a piece of experience having a great impact on visitors offered by two artists, Cardiff and George Bures Miller . They are now living in Berlin after having studied and established in Canada as notable electro-acoustical sculptors. Hard to describe for its sensory nature in works, this exhibition is characterised by a special main character, the sound. Works are plays with no actors, or better, these latter are let to be imagined by the public while standing in front of sets. The imagination is also helped by objects and lights moving and among all by more or less whispered sounds, sent in the air by pc or other technical electronics. Everything takes place in suggestive settings on the visual point of view, so good in planning to give birth to multiple stratification in dimensions, messages, sensations and parts.

Visitors, taking an active part in the exhibition, experience something puzzling and come back home feeling to have passed through a space-temporal nowhere but, at the same time, they believe to have lived something great and a sensation opposite to loneliness. They are obviously surrounded by other visitors, as by the artists in person and by other people they didn’t see but clearly perceived.

This sensation can be clearly felt in the work The Paradise Institute expressly made in 2001 for the Canadian stand in the Venice biennial exhibition. You sit down in a gallery of a midget theatre. While lights are turned off to start the representation, the public sees the theatre becoming incredibly true and has his space perception mixed up. The tiny stalls beneath seem indeed plainly far away, as the screen gives the impression to have become the big screen. The showing of a disturbing, misleading film starts and settings become more suggestive when you put on headphones. In fact they spread sounds as the visitors were in cinema: the typical Italian who has not turned his mobile off, people coming late, some coughs of the nearby spectator, a woman who is incessantly whispering and chewing pop-corn, worried because she left her heater on. You get to a point in which you don’t know anymore what belongs to the movie, what is happening in the gallery and what comes from these perceived people.

And the suggestive power of sound, handled by these two artists, is especially evident also in The Forty Part Motet , outstanding work of art placed in the charming Chapel of the MACBA . Here the visitor can stand amongst 40 loudspeakers set in circle and divided in groups of five. Each one of them are persons and the visitor is soon persuaded. They start talking to each other, testing the instruments and then singing an adaptation of Thomas Tallis’ opera Spem in Alium (circa1570), a piece thought for a similar place and for eight groups of five voices (bass, baritone, treble, tenor and soprano).

An other interesting work is Imbalance .6 (Jump) created by da George Bures in 1998 and included in his series Simple Experiments in Aerodynamics . It deals with a television hung at a little distance from floor by two cables, broadcasting a video with the artist’s feet. The main character is jumping, bending the floor and the television repeats his movement as it contained a real person, with a real weight, his real skills in working with materials and in interacting with physical forces.

In the work Telephone/Time of 2004 you are asked to lift a handset up. You will eavesdrop a conversation between the artist and a scientist. You will ineluctably feel guilty as voyeur, but it’s worth: the discussed subject is extremely interesting and concerns each of us. They are indeed speaking about perception of time and subjective concept of time. Both are taken as pieces of evidence for multidimensionality.

The Dark Pool, 1995, is a further work of disturbing beauty. You come into a dark room, lit only by a bare and soft bulbs hung from the ceiling. On table and on other pieces of furniture there are books, exercise-books, cloths, used tea bags and objects of all sorts. They are traces of a human life which seems belonging to a distant past, already dead: the mattress is without sheets, everything appears old and abandoned. You are again invited to become voyeur and you will surrender to temptation. But as soon as you come near objects, sensors registers our presence and let you hear footsteps, pouring water, conversations. The room is teeming of people and it seems you are in the past when that place showed signs of life. You hear stories suggesting other sights and suddenly everything is in movement.

You are conducted in a house characterised by presences/absences also in Opera for a small room , 2005. Through windows and holes the visitor spies a room full of records, old radios, baggage, loudspeakers and record-players. A voice following you from loudspeakers tells you a story while orchestrating record-players and lights. Outside the room environment sounds distributed in space are spreading in the room and come into the story: a storm interferes with lights, the passing of a train makes the chandelier swinging. The narration is on growth and music is more and more modern till everything merges: music goes out the room, lights move like in a real choreography. Final clashed of the usual adventure fellows not seen, but heard breathing and perceived during the show.

The title of the exhibition, The Killing Machine , takes its name from an installation, realized that same year, and showned the public for the first time in the same occasion. Two mechanical arms are examining and torturing a body, as usual invisible, bent to a pelt- covered dentist chair. All around there are voices, sounds, live percussion orchestrated by pc, mirrors, tricks of light, television switched on all in a sudden and just broadcasting snow. These are the “pieces of furniture” provided for this unbarred cage. It’s the visitor that activates the process and then, sadist and still, keeps looking at, as he was the operation director, seated at the table where he pressed the starting button. The entrance corridor is covered by a material, used also to soundproof all showrooms. In this case it seems part of the installation as it enhances the sensation of descent into a horror underground floor where you will find terrible torture chambers.

Atom Egoyan, after coming across Janet Cardiff’s Whispering Room , wrote “I had the sensation to be in the midst of a movie at the planning stage, still in the author’s mind.” These are characters of cinema in progress, of connivance towards the impressive installation concreteness and the absolutely internalised way of living it. Indeed these features make visitors experience the work of the two artists as original and unmissable.