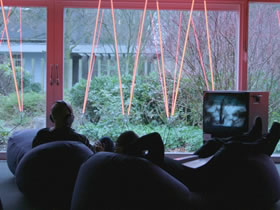 The last edition of Transmediale represented for us a change edition and after gathering many opinions and impressions during the festival we can say that, according to many, it was an edition of difficult comprehension. Despite it, as point of reference for all who deal with new media, Transmediale is on everybody’s lips, even after its end. And as each important appointment it is always under floodlights, giving confirmations and wrong-footing with its changes.

In general it seems Tranmediale has definitively broken the frontiers pushing towards mainstream contemporaneous art . Anyway, it isn’t a new thing to who has recently visited festivals. If, on one hand there are festivals loyal to proposing new media as trade union between science, technology, art, design and communication, on the other hand there are many reviews engaged with legitimizing some works of new media art as historical ones, legitimized and authorised of contemporary art. This separation is evident to us, as never before, in this edition of Transmediale, as the tip of the iceberg whose basis float just under the level of the sea, both in the works and meetings and in the different public during the day and the night at the CTM, who, is integral part of the Berlin’ festival.

But 2007 edition will be remembered for the goodbye to Andreas Broeckmann , artistic director since autumn 2000 after the charge of project manager at V2 Centre of Rotterdam, directed by Alex Adriaansen. Broeckmann transformed Transmediale from research moment for “a few” (because in 2001we were there, even if inexperienced and younger and with a different role) to mainstream event, big fair of new media art, moment of reflection and term of comparison for many professionals.

I don’t know whether we succeeded in our purpose, but maybe Andreas is right, it is a problem of perspective and of what we do not expect by a festival such as Transmediale. Anyway, we feel the need to analyse the phenomenon, persuaded that his word is the most important term of comparison.

Marco Mancuso e Lucrezia Cippitelli: Andreas, which is your opinion on this last edition of Transmediale? Which vision have you about digital art and the professions connected with it, as well as the growing attention of media?

Andreas Broeckmann: We wanted to create a programme this year that would give time for reflexion, and that would offer projects and artworks that do not just run after the latest trends of digital life-styles, but that articulate the role that art can play in dealing with and thinking about our contemporary situation. The audience of the festival is quite varied and different people bring very different expectations to the event. We are satisfied when people get surprised and when they can take away things that they had not expected. Unfortunately, media attention is often very superficial, journalists see only what they want to see, and most of the time they miss the point that the festival has a programme that lasts for six days and has over 80 individual events, many of which correspond with each other.

Marco Mancuso e Lucrezia Cippitelli: From the first edition you directed, the festival has got a relevant international position, criticizing and analysing, presenting and facing subjects connected with new media in general. In 2001 DIY Do it yourself was an important point to present the practices related to activism and hacking and the artistic forms distributed through internet. Now, Transmediale seems a reification of the stability the festival has built itself as “mainstream EVENT”. In other words, less questions and more visibility as institution. What do you think about it?

Andreas Broeckmann: I’m not sure whether you actually visited the festival in 2001, but I would dispute whether the focus in the programme has shifted as much as your question indicates. From the beginning, the formulation of issues in digital culture through the languages of art has always played the most important role, while hacking and activism have not been treated as central issues at any of the festivals since 2001. They have been present as an aspect and a specific practice in digital culture, but your reading of the DIY festival (or rather its documentary publication) seems to be determined more by your expectations than by the actual festival. Likewise, I find it difficult to follow your claims of institutional stasis and reification of this last festival. ‘Mainstream’ is very much an issue of perspective, and if you mean that we do not strive for self-marginalisation any longer, I could probably agree. I also cannot say how many of your questions were answered, but the conferences both in the main hall and in the salon have never been attended by so many people, and they stayed, so they must have been hearing things which were of interest to them.

Marco Mancuso e Lucrezia Cippitelli: The difficult relation between new media and contemporaneous art is changing recently. Many critics and curators, who normally work in the system mainstream of art, now have to deal with subjects related to media and technology, often without the necessary competence, trying to apply categories which are often too narrow and closed. The contrary too is true, people who aren’t expert in art have to deal with the system of art, and the focus on the point of view of technology is too basic and brings the interest to projects which probably aren’t artistic projects at all. What do you think about it thanks your experience with Transmediale?

Andreas Broeckmann: I find your description rather schematic. My main experience is that the techno-fetishism of the 1990s in media art has subsided and that while there are still many people are still doing little more than experiment with the latest technologies, there are now also a growing number of artists who employ their media in a very conscious way. The installations that we could show, for instance, in the exhibition at this year’s festival, are a result of that process, where it has become possible to present a collection of works that have an interesting thematic relation and that are strong, individual artworks. It is not really surprising for me that what is in fact artistic quality and its appropriate presentation, gets read as ‘reification’ and ‘mainstream’. Again, I believe this is a matter of perspective, and of the choices one makes as curator and as critic.

Marco Mancuso e Lucrezia Cippitelli: The conference “Media Art Undone” was focused mainly on trying to find a way of pushing media art towards the world of contemporary and institutional art. This was the general sensation on the show, the round tables and invited artists. the public seemed divided, on one side , people coming from the “world of art”, with their backgrounds and experiences, from the other side, people coming from “techno culture” and from a more commercial and professional world. The first didn’t want to make a distinction between “contemporary art” and 2media art2, the second ones wanted the creation of a short circuit art/technology/ communication, without any preoccupation of terms and distinctions between market and galleries, commissions and artworks. Do you think this division will become wider in the future? Do you think there will be two different approaches (cultural, artistic, and professional) in the world of electronic art?

Andreas Broeckmann: In the transmediale festivals of the last years, we have tried to find a good balance between digital culture and art. The relationship between the two is problematic because, for a long time, the whole field was completely marginalised so that artists, activists, theorists, curators, anyone who was doing stuff with ‘new media’, were huddling together. As digital culture is becoming a general condition of contemporary life, there is also more differentiation in that scene, and people have to painfully realise that there might not be that big ‘we’ in the media art scene (any more). I believe it is necessary to confront that change, which is why we have organised this conference panel.

Marco Mancuso e Lucrezia Cippitelli: One of the main problems influencing the world of new media is often the general lack in quality , above all in activism , as for instance Indymedia which here in Italy is having huge conceptual problems, due to the incapacity to work with the right awareness of the contexts and quality of the projects. Do you think this kind of analysis can affect the scene of new media in the long term?

Andreas Broeckmann: You can gather from my earlier answers that I believe in a certain rigour when it comes to methods and results of working. For my own taste, things are often not brought to a level where they can be presented and people outside of a small in-crowd can actually understand what the author or author collective wants to say or show. It brings us back to the earlier argument about institutionalisation. You can of course choose to keep processes open and to communicate the fluidity of concepts and political conflicts. However, I see transmediale as having a role beyond a smaller circle of people who share the same ideas about media activism and critical media practice. I have wanted to serve a broader audience that is curious and critical about the way in which media and digital technologies are influencing our culture. These are often young people who have no idea what Indymedia is, but they feel that there is something wrong with the way in which YouTube works. The festival is also there for those people.

Marco Mancuso e Lucrezia Cippitelli: Why did you decide to leave the artistic direction of Tranmediale in this moment? Is your choice connected in some terms with some of the subjects we discussed? What have you planned to do in the next future or what do you want to do? And who will be the next director the festival?

Andreas Broeckmann: I don’t know how transmediale will develop, though I fully trust Stephen Kovats to give it an interesting new twist. The reasons for leaving the festival were mostly personal  after seven years I wanted to do something else, in order to break routines and explore some other ideas I have for myself. In the coming months I will be working on a book. We are preparing the re:place 2007 conference and I am working with the TESLA media art lab here in Berlin . And beyond that, I am keeping my eyes and ears open.