8bitpeoples, Research And Development In 8bit 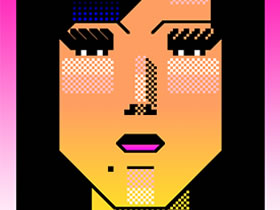 In last number you find out about the Blip Festival , probably the most important international gather of 8bit artists ever organized. In New York Monica Ponzini had the opportunity to assist at the event and describing it in the article on Digimag 21 of February, with the video support of State Grezzi Production.

Blip Festival is one of the active projects by 8bitpeople collective, multiform and multifunctional soul composed by more than 9 artists, opened and dedicated to the 8bit audio-visual aesthetic of video-recreational matrix. The message is clear from the start: “Our primary interests were to provide quality music for free and most importantly to have fun” . That is: you don’t bother us with your analysis on the aesthetic low bit phenomena, we’re here to take what was left behind and enjoy in the most simple and genuine way, sharing all this with as much people as we can, free.

Even if it is still excluded by the majority of the international festival (except for some rare and farseeing cases), the 8bit movement is now an artistic and cultural phenomenon of great respect, correlated to the game art as socio-cultural experience, even if not in a serious manner. 8bitpeople represent a real community of creative artists able to work unite in several projects, live performances, release online and different graphics. Pushing the audio-visual limits of the arcade console of first and second generation (Game Boys, Atari, Commodore), 8beatpeople offers on its site albums, covers in print quality, release audio in high quality, bonus tracks and software hardware and work documents inside the R&D section of its website, a real full of for everyone into the 8bit audio-video experimentation.

I had the occasion to talk with one of the 8bitpeople members after the recent release of the first compilation 8BP050 presented during the Blip Festival, supported by the no-profit artistic space The Tank , Joshua Davis aka Bit Shafter (missing Nullsleep for a trip in Japan ).

Marco Mancuso: Can you tell me how 8bitpeople was born?

Josh: I’ll defer to Jeremiah (aka Nullsleep) to answer this one in more detail, since I came in after 8bitpeoples was already active. But in short, he and Mike Hanlon (a.k.a. Mesu Kasumai, Tangible, and other aliases) founded the netlabel in the late ’90s to focus on the aesthetics of low-bit computing, and to release music created in that spirit. Jeremiah can give you a better summary of the history and motivations behind it.

Josh: I think it’s been a pretty fruitful pairing. We each come to 8bitpeoples with similar creative experiences — involvement in ongoing music projects, performing live, and so on. But working jointly we’ve found ourselves taking on much more ambitious ideas — a couple of tours, the Blip Festival, a big 70-artist chiptune compilation — projects on a
scale that was new to both of us. It has a lot to do with the fact that we both have a tendency to let initial on-paper ideas really snowball, and neither of us are sensible enough to recognize when an idea has become totally unrealistic. So somehow we’ve been pulling them off.

Marco Mancuso: What do you think about the growing attention of media and public around the 8bit aesthetic? I mean, I think Blip Festival has been an important moment for all the artists that create low bit music and video and software

Josh: To me, the interest is a natural and probably inevitable development. I think it’s a function of a forgotten aesthetic being re-discovered by a generation of people who were impressionably young when the aesthetic was state-of-the-art. So it makes sense that after being supplanted by ostensibly better (and therefore successively cooler) graphics and audio, this style is now being rediscovered on its own aesthetic merit. The drive in technology is toward more sophisticated machines capable of presenting an experience that’s more and more lifelike. So, seen in that context, low-bit aesthetics present a really interesting and appealing abstraction.

And although you see these styles bubbling to the surface in advertising, mass media, etc., the Blip Festival was something directed at the chiptune scene specifically. Anyone new to the movement was of course welcome, but increasing exposure wasn’t a specific goal. We knew that it would probably attract some attention, but our motives were more selfish, we just wanted to see all of these people perform, and to raid their merchandise.

Marco Mancuso: Can you find differences between the music&video 8bit movements of Europe, USA and Japan? Are these differences caused because of socio-cultural different approach or do you think 8bit can be considered as an international form of expression?

Josh: I think working in a low-bit aesthetic has the same appeal across different cultures, but the application of the style can be culture-specific in some ways. The Japanese chiptune movement has always been a good example to me, there’s a certain experimentalism there that’s very different and uniquely Japanese. It’s hard to pu my finger on it, but you see traditions at work over there that are really different and really interesting to someone coming from a more Western perspective. Kplecraft for instance is a duo from Tokyo that uses Game Boys, Famicom, saxophone, conga drums, and digeridoo — and the startling part is how well it all works together. I don’t think you’d see many people in the States doing that. Coova is another good example, often doing long-form, evolving, bell-tone Game Boy compositions that are really transfixing. Over here you really don’t see much of that. Then there are the Swedes, who seem to be genetically predisposed to making meticulously-crafted, intricate, technical, and melodic chiptunes. If you hear a new track and it’s bursting with a mind-bending shooting-gallery of tightly-constructed, deftly-arranged melodies and flourishes, nine times out of ten the composer is Swedish, and probably also a cool person. In the States there seems to be less emphasis in general upon that kind of virtuosity.

Marco Mancuso: You pay particular attention to the graphic of your event, to the packaging of the products and the live visual. Are you al able to work both on images that on sounds or do you work collectively on a single project?

Josh: It depends on the project, but a lot of things we do are collective efforts. Live shows often involve a chiptune musician teamed up with a visualist working in a complementary style; album artwork is often done by graphics artists who are into this aesthetic, etc. It’s a loose and informal community of people that are involved, jumping in where needed and when able, and I think 8bitpeoples as an entity has become one of several community focal points out there. It seems to draw really talented people, musically, graphically, etc. — it’s a cool thing to be a part of. .

.
Marco Mancuso: All of your production are under Creative Commons licence. Do you create some form of business on your works or do you think you will?

Josh: The Creative Commons licenses we use aren’t a business strategy of any kind. It’s just a way of explicitly granting listeners permission up-front to download and hear the music for free and to pass it along to others. 8bitpeoples isn’t even a business in any formal sense. It’s purely done for enjoyment, and with a few exceptions, everything is made available for free. We operate it in our spare time, and fund it essentially out-of-pocket. I don’t think either of us have given much thought at all to adopting any sort of business model moving forward. It’s a labor of love, and while it’s not self-sustaining financially, that’s not much of a concern to us. There’s a creative momentum there
that we believe in and are excited by, so it’s no sacrifice to keep it in motion via our own funds and effort.