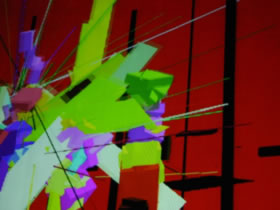 After the big success of the first edition of 2005 in London, Optronica comes back from the 14th to the 19th of March thanks to the collaboration among the British Film Institute , Addictive Tv audio-visual artists and producers and the association Cinefeel , to present what announce to be one of the most innovative and dynamic events of 2007.

The location will be the BFI IMAX cinema, the biggest projection room of London , and the restored National Film Theatre Complex, which will re-open under the name of BFI Southbank .

Optronica is conceived by Additive TV as an event devoted to the exploration of the fusion between audio and video and will house performances, screenings, talks and work-shops devoted to field experimentations. “Recently, the scene has developped quickly all around the world, new artists very different among them have worked in the field of musical and visual exploration. This phenomenon goes with the diffusion of festivals devoted to visual culture that show the huge interest this new form of art is engendering. ” Explains Graham Daniels by Addictive TV.

This year some of the most renown film-makers, musical experimenters and audio-visual artists will partecipate, whose aim is to offer a wide view on the different modalities of fusion between audio and video and showing how the long tradition of visual music has today expanded up to include a wide number of styles and practices.

Confirmed at IMAX Cinema the world premiere of new performances by Trevor Jackson , Fred Deakin by Lemon Jelly and the special collaboration between the Austrian pioneer Christian Fennesz and the famous Newyorker video artist Charles Atlas . Optronica will welcome the artist Ryoichi Kurokawa, who will perform at the BFI Southbank together with the spanish Reactable, the English artist Semiconductor and Vitascope, who will present their last works on the occasion of the festival.

Cinema Screening will house Optronica Screenings at the BFI, video review born from a selection between the videos chosen within the hundred of submissions from all over the world and explaining the different modalities the concept of visual music has expanded recently.

Big in Japan is a review Optronica devotes to the flourishing audio-visual contemporaneous Japonese culture, with the participation of artists as Hideaki Motoki, Kloma, +Cruz and Enlightenment.

Video on demand is the section Cinefeel devoted to videoclips and its growing importance as creative format and in particular to new musical promos and cut ups works. Optronica Lounge is the section devoted to video installations and interactivity. The Lounge zone, located near the NFT3, will house GRIDIO , a big human sequencer presented by Brightonart & Coldcut , the interactive installation Light Box and the work by Reactable .

Within the part devoted to video installations will participate the labels of audio visual products LightRhythm , NoTV and Addictive Tv and the Italian curators Digicult and VjCentral.it which will participate with the project Italian Do It Better .

Italian Do It Better , is the result of the first collaboration between the festival Optronica and our two portals. Six videos will picture some among the more interesting Italian artists acitive in the field of audio visual experimentation. Those videos, by Elec, Kinotek, Mylicon/En, Tez, Quayola and Otolab , who will be presented in exclusive at the festival, one of the rarest occasions of presenting Italian artists abroad in an electronic event of such importance. A selection finalized to represent a panorama on synesthetic chances of audio video synchronization and on the eclectic use of codes and software, rigorously made in Italy .