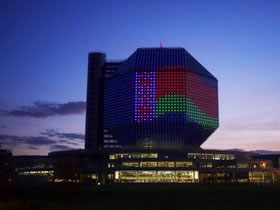 This year the Transmediale of Berlin has presented a panel called Urban Screens 2007, conference preview that will be hold in October 2007 in Manchester , UK . The first edition of Urban screen.05, held in Amsterdam , was produced by the Institute of Network Cultures and conceived by Mirjam Struppek .

Both conferences are the result of a growing interest from societies, architects, media designers and researchers in the chameleonic media transformation of public spaces and relief architectures in the most important European countries: the Blade Runner city’s sci-fi landscape becomes ordinary, from Times Square icons, and Tokyo’s and Hong Kong’s colourful LEDs up to the familiar Termini train station of Rome provided with digital screens in each platform.

“Urban Screen” means a variety of dynamic surfaces as bright LEDs, plasma screens, and similar communication digital surface forms in places traditionally defined as public. Among those there are the so called intelligent architectures (?) or public buildings facades reinvented or re-designed by bright surfaces. This new category of urban landscape elements smoothes the way to a brand new considerations on custom, opportunities and risks connected to the diffusion of such technologies, strengthening an interdisciplinary discussion between the field of architecture, media, urban business management and sociology.

From dominant elements of the private landscape at home, at school or at work, the computer, the screen, the TV are delocalized and exported at an urban scale. [ McCarthy A. (2001), Ambient Television: Visual Culture and Public Space ]. We have more and more streets, squares, public parks in the real world and meanwhile we consume virtual spaces within mobile, GPS and TV on big screen. The private and public scale concept and real space perception transmigrate in a flux of visual and sonorous info mediated by digital equipments. This scale passage is far more evident during big spectacular manifestations. Last year, The FIFA World Cup year, constituted the TV on big screen boom. Each big or little European town was provided with a flat screen gathering thousands of spectators. Who, as many in Berlin , repudiated this mass event, brought his own TV in the streets rebuilding their lounge in the open air.

The nice weather and the event have made explode private media consumption intimacy in public places. Digital instrumentation has then become an integral part of social life and uses a light-hearted and attractive language, which, according to Postman [Postman N., (1985) Amusing ourselves to death ] , dims and subverts public space value and objects’ critical conscience.

Urban scale surfaces are used for their semantic value producing an experience of public space as an”exposition space”, where the passer-by is bombed with visual stimuli and image fluxes. This happens to digital screens applied on historic buildings to revitalise the urban centre, on modern architectures on which implement investments (as for the multimedia building façade for Potsdammer Platz’s offices), for big screens within the subway broadcasting news and commercials, etc.

A similar communication resource broadcasted by devices of huge impact and very high price is dominated by economic and great calibre political actors such as big communication societies and multinationals. So far, there are no rules, neither national, nor European managing media surfaces localisation to be established in the city, so that strategic places sold below cost by town councils follow market logics. Most of the times, the citizen is a passive user and hasn’t any interaction ability neither on media colonisation of public spaces, nor on applied technology except for some artistic projects (for instance Chaos Computer club et al.)

During the Berlin meeting which introduces Urban screens 2007 two main aspects of the future Manchester conference are presented: the project of multimedia surfaces and of content transmission. Tim Edler (co-founder of the architecture office realities:united) and Mike Gibbons will intervene at the panel. Tim is an architect who has been working with architectures and multimedia surfaces, the video program is a part of architectonic form of. Tim is a designer of stereometria multimedia screen by Kunstahaus by Gratz and by the SPOTS installation by Potsdamer Platz . Especially for SPOTS, the function of in motion image is to advertise the product, in this case the building itself.

Mike Gibbons is the BBC’s responsible for a program launched last year on mega screens in all English towns. The program, financed by the national channel, has mainly a public service aspect, without specific commercial finalities. The BBC has started an experimentation phase, implying artists, producers and the public, imagining contents and new formats suitable for profiting from the new platform as mass media.