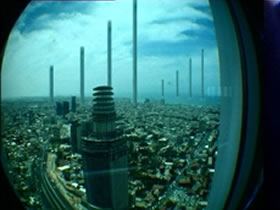 In the international panorama of audiovisual performances, one of the most structuring characteristics of the projects is the high degree of control that performers want to have during the performance. Ran Slavin , musician, video-artist and multimedia artist from Israel, works in a completely different manner.

His Israeli origins turn into in a message, sometime even politic. Ran Slavin is though a complete artist, that means interested to his universe more than to the Israeli-Palestinian situation.

The work of Ran Slavin is hardly definable and hardly comparable with other international audio-visual artists. His last work is called Insomniac City , an experimental noir science fiction movie of 40 minutes. A mediation on the extreme consequences of the contemporary urban life. Invited at the Architecture Biennale of Venice, Insomniac City, after lots of peregrinations, has been produced by the Mille Plateaux label. During this special interview, we’ll talk about this and in general about his career.

Bertram Niessen: Let’s talk about you and your job

Ran Slavin: I am auto didactic in video and sound and involved with electronic media and arts since the early 90’s. I produce video installations and screening based works, experimental cinema, various forms of music, engage in live audio visual improvised performances and also work in post production compositing with Flame.

I started to play live at first as a bass guitar player in a punk band when I was 14 in Jerusalem, although my instrument was the guitar. I moved to London for almost 3 years at the age of 15 where I played bass again in a post punk band. Coming back to Israel I formed 2 more bands in which I played guitar and vocals with which ive had 3 releases. Since the early 90’s I work solo on various diverse music and video projects. Around the early 90’s I started exploring live video mixing at first working with VHS tapes. Nowadays I work with 2 laptops running Jitter with various patches I build. The latest one is of simultaneous sound and video control. In live video I work with images, not textures, a large and expanding data base of videos which I shoot myself. I never use found footage or sampled visuals and I hardly use beats nowadays. The set is moody and abstractly cinematic, incorporating also text play in real time. Everything is linked to the sound. Colors change the sound, texts change the sound, the cursor movement changes the sound etc. All processing is in real time, open to a large portion of randomness and the dealing with it live. Its improvised, unexpected. Every live set is a gamble so to speak. There are no guaranties. Its quite a terrifying stance for a performer to be in but there is no point in playing it safe without the element of risk, its what i truly consider as live A/V, live cinema, A/V improv, whatever you want to call it.

The other pan of my visual work, is non live videos which vary in length form and subject. They span from short 1-9 minute videos to 40 minute medium experimental fiction.

Bertram Niessen: How much does the project worth in your job? Do you start from a sample or an image or do you develop a concept in a bigger sense?

Ran Slavin: The project is very important as it defines the meaning and intention of a work. I start from scratch or a single image many times. Sometimes a sound, tone, or instrument. Also in live a/v impro its the image that is the trigger that defines the sound. When editing linear video, sometimes I will edit a sequence in silence because its the best way to hear the soundtrack you want. But as a project develops on the editing table the sound and image get quite entangled and sometimes its hard to tell which came first. Sometimes i will start to work on something intuitively and will only find out the meaning later.

But on the other hand Im working now on a new script which will include texts for actors, screenwriting, a narrative, spanning a few locations in Israel. With this I found that you have to develop a concept in a wider sense, when you are not working alone anymore, when you have to convey to other people what you want from them, to stage an artificial reality, you have to be clear on completely new level, also to yourself.

Ran Slavin: These 2 elements are the key players in the architecture of what i am doing. I talked about that in the first question, where the versatility of motion graphic software enables me to construct a custom synthesis between the two in a way that is not pre programed. Also in my film and non live video, the relations of sound and video are always in support and defining each other.

Bertram Niessen: Which are the most important projects?

Ran Slavin: I consider most important the project which occupies my mind at the time im working on it. My big and most recent project is called “Insomniac City”. Its a 40 minute experimental film-noir sci fi fiction. A probe and meditation into extreme notions of modern day urbanity. It was initially commissioned for the Venice Biennial of Architecture in 2004 and it has been growing ever sense. The structure concept of Insomniac City has been to keep it in flux and open to change. It already changed and appeared in 3 different forms. It exists as a single channel work and as a 2 and 4 channel realization. It has been screening internationally quite a lot in 2006 with dates in 2007 as well. Its has been released in its 3rd version lately on Mille Plateaux and available for sale as a double sided DVD PAL/NTSC and a CD with music from the film and beyond. This project is dealing with border notions of dream and fluid urbanity through insomniac conditions and an overtone of crime. The protagonist is incapable of distinguishing whether he is the author or the victim of an imaginary happening.

lso a new audio CD is released in march on Cronica records, its title: “The Wayward Regional Transmissions”. In this project I approach a fusion of Oriental Music with Abstract Glitch , juxtaposing traditional themes, laments and folklore spiritual themes with abstract narratives produced through the use of contemporary digital tools. The merging of acoustically displaced elements of folklore overtones and a more radical approaches to sound and musical structure, set in a context that tries to maintain an aerial overview of a contrasting hybrid geographical region could be described perhaps as a utopian merge, Oriental Abstract Spiritual Music.

Bertram Niessen: Some of your projects are reflections of the Israel and Palestine conflict. How much is this argument present in your work and how?

Ran Slavin: I live in Tel Aviv, was born in Jerusalem, and occasionally, when the ‘shit hits the fan’, I make works which refer and respond directly to the political situation, upon its complexity and vicious overtones. But its not my mainline. I dont consider myself a political artist but I engage in political outbursts from time to time. Im usually more interested in the subversion of reality, and fiction, rather then direct reality, but occasionally I will take a stance.